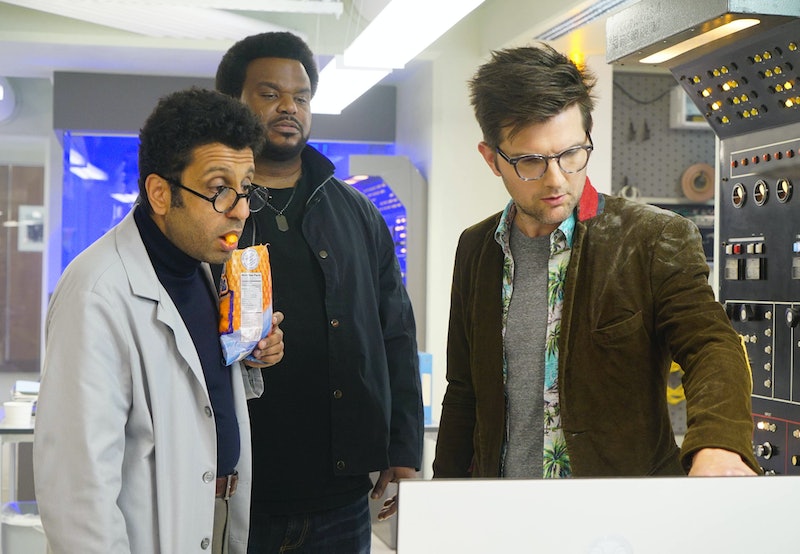 What if supernatural things were really happening in the world? What if there was a there was a small collection of government agents that investigated those supernatural occurrences? On the Oct. 1 premiere of Fox's Ghosted, Adam Scott's Max and Craig Robinson's Leroy discover an organization like that. But is there any real precedence for such a thing? If the Bureau Underground is real, would average citizens even know?

But the Bureau Underground doesn't appear to be pulling from any actual government organizations as much as it's pulling from other television shows. Ghosted finds inspiration from other science-fiction shows The X-Files and Fringe. Both shows involve FBI agents dedicated to the investigation of paranormal phenomena, dealing from aliens to alternate timelines and everything in between.

While the FBI as portrayed in The X-Files and Fringe are taken very seriously, Leroy Wright and Max Jennifer aren't nearly as competent as Fox Mulder and Dana Scully. Ghosted applies the X-Files formula to a sitcom structure, so it's safe to say that the Bureau Underground is also part of the grand joke. However, just because there's no real Bureau Underground doesn't mean the Federal Bureau of Investigation hasn't looked into some cases that would be fit for Underground. In fact, the FBI is fairly open about their investigations into unexplained phenomenon.

Apparently, the question of whether or not the FBI has a paranormal investigative unit comes up so often that the FBI felt the need to debunk the myth on their website. "The FBI is NOT on point to investigate the supernatural," the site reads. Though that's not the primary function of the FBI, they do have a few files on what they call "unexplained phenomenon" in their archives. These phenomena include investigations regarding Extra-Sensory Perception and reports on the mysterious mutilation of cattle in the mid-'70s.

But perhaps the most interesting unexplained phenomena the actual FBI has investigated, however, are related to reported UFO sightings. Unidentified Flying Objects have long been a mainstay in popular culture, likely due to the fact that the FBI has actually looked into some reports. And some pretty wild claims were made in internal FBI memos. One particular memo, the infamous Guy Hottel memo, involved the titular agent sharing some bold claims with the FBI Director. According to the FBI, the memo is "most popular file in the FBI Vault," and considering the shocking details within, it's no surprise. The memo talks about a third-party report that three flying saucers had been recovered in New Mexico. The report further stated:

"They [the saucers] were described as being circular in shape with raised centers, approximately 50 feet in diameter. Each one was occupied by three bodies of human shape but only three feet tall, dressed in metallic cloth of a very fine texture. Each body was bandaged in a manner similar to the blackout suits used by speed fliers and test pilots."

Though that reported sighting is detailed in an actual FBI memo, the agency cautions online that it shouldn't be accepted as any kind of proof. "The Hottel memo does not prove the existence of UFOs; it is simply a second- or third-hand claim that we never investigated," the site reads. And according to their site, the FBI's files on "Unexplained Phenomenon" haven't had any additions in the past couple of decades, possibly meaning that most strange phenomena can now be explained with a quick Google search or that extra-terrestrials gave up on Earth after the '80s ended. Take your pick.

Whatever the reason is, it seems that the FBI has no need for paranormal investigative unit. Ghosted's Bureau Underground isn't real, but the idea that the actual government has looked into reports of strange events definitely is.

More like this
‘Squid Game’ Creator Hwang Dong-Hyuk Just Dropped A Major Season 2 Tease
By Brian Anthony Hernandez and Bustle Editors
Where Is The Bling Ring’s Rachel Lee Now?
By Arya Roshanian
What Is 'Pretty Wild' Star Tess Taylor Up To Now?
By Morgan Leigh Davies
Where Is Armie Hammer’s Ex-Wife Elizabeth Chambers Now After 'House Of Hammer'?
By Grace Wehniainen and Radhika Menon
Get Even More From Bustle — Sign Up For The Newsletter