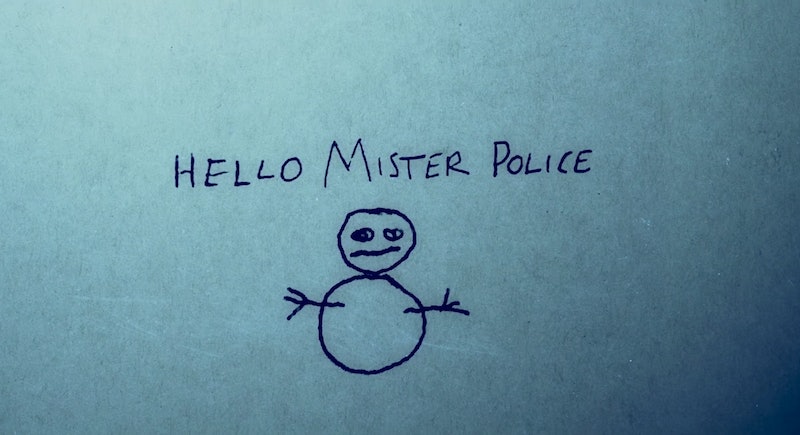 Based on the bestselling 2007 Norwegian crime novel by Jo Nesbø, The Snowman, a terse tale of gruesome deaths coinciding with snowfall, hits theaters on Oct. 20. Hot-mess detective Harry Hole (played by Michael Fassbinder, and yes, that's his actual, unsubtle name/shorthand for his dark depths) investigates a string of murders around Oslo, only to realize the killer may have struck many years before. Hole tries to convince his higher-ups of the connection, but they refuse to believe him. Part of the story hinges on the fact that if true, this would be Norway's first confirmed serial killer, a trail which Detective Hole's been accused of running down and crying wolf on before. But what about in real life? Is The Snowman based on a true story, and do the grisly deaths, involving dismembered bodies turned into snowmen, have any tie to reality?

Fortunately, the answer is no. In reality, Norway doesn't really have serial killers with flashy M.O.s or police-taunting notes, in fact, the country doesn't have many multiple murderers at all. The sole convicted Norwegian serial killer is Arnfinn Nesset, a former nurse convicted of poisoning 22 patients. He initially confessed to murdering 27 patients with suxamethonium chloride, a muscle relaxant, but later recanted. The investigation of his crimes revealed he may have killed as many as 138 patients. Horrifying as that is, it's a different situation than severed heads topping a snowman.

In fact, Norway's crime rate is incredibly low, with only 29 murders in the entire country in 2014. So where did author Nesbø come up with such a disturbing scenario? The author revealed in a Telegraph interview that it partly stemmed from his natural pessimism, but also said that he was influenced by two-fisted American hardboiled crime stories.

Norway had a terrible brush with brutality more recently. In August 2002, Anders Behring Breivik was convicted of mass murder, in a politically-motivated terror attack on a Worker's Youth League summer camp that killed 69. Nesbø said in a Sunday Morning Herald interview he doesn't think the attack will change Norway the way 9/11 altered the United States, but it will affect his own work. ''I can tell [this] when I'm writing now,'' he said. ''It's not like I'm consciously thinking about it but it's in the back of my head. In the U.S. it was the point when Americans were forced to ask themselves, 'Why does the world hate us?" But in this case it seems like it's the act of one insane person, so it means it probably won't have the same impact.''

For all their shocking violence, the main focus of Nesbø's work is more intimate forms of destruction and loss — absent parents, dishonest relationships, and emotional betrayals. And when violence isn't in service of emotion, Nesbø agrees it goes too far. Of a scene in his book The Leopard where a man is tied to a wood-burning stove and tortured, the author told The Guardian, "Looking back, I regret it, because it wasn't needed. A Finnish designer once said everything that is not needed on a house will sooner or later seem ugly. I think it's the same with words."

Given that The Snowman is 580 pages long, let's hope every word needed made it to the big screen. While the murders of The Snowman aren't directly pulled from real life, the scares its film adaptation creates will be; director Tomas Alfredson also directed Let The Right One In, another blunt, bloody tale eerily realistic and utilizing its snow-dense landscape to maximum effect. After watching The Snowman, you might never wish for a snow day again.