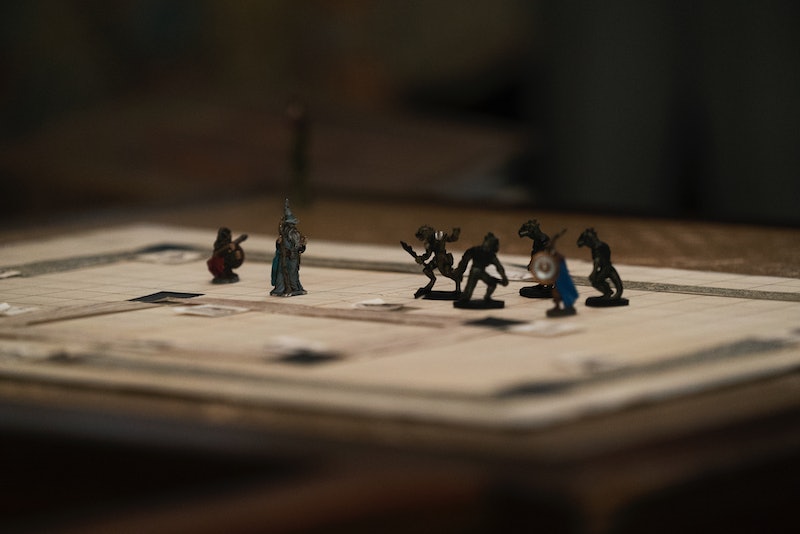 Stranger Things isn't shy about borrowing from other pieces of culture. From popular 80's movies to classic horror novels, the show has gotten a lot of mileage out of remixing and repackaging tropes from the creators' childhoods. One of the largest influences over Stranger Things is Dungeons & Dragons, which not only unites the main characters but also offers a convenient language to decode the supernatural happenings in Hawkins, Indiana. In Season 1, the children of Stranger Things called the monster terrorizing Hawkins "The Demogorgon," after a creature in the came. But finding a Dungeons & Dragons parallel for Stranger Things' shadow monster is a little tougher.

The D&D Monster Manual is filled with horrifying creatures, including lion-headed chimaeras, weretigers, and owlbears (oh my!) However, no one creature in the Monster Manual comes close to the all-encompassing horror of the Shadow Monster presented in Stranger Things 2. While most beasts in Dungeons & Dragons are designed to be slain, or at least avoided, The Shadow Monster's size and power make any attempt at survival seem futile.

While the monster itself has no direct analog in D&D, it appears to take inspiration from some of the games' most memorable beasts.

The clearest inspiration for the Shadow Monster of Stranger Things is the monster called "Shadow" from D&D. The massive difference between the two, however, is the size and shape of the two beasts. While the monster in Stranger Things is a massive, multi-story monster with long wispy tendrils and a massive head, the shadows of D&D are the shape and size of an average human. As described in the Monster Manual, "Shadows are undead that resemble dark exaggerations of humanoid shadows," that "reach out to feed on living creatures' vitality." While they may share a color and possibly their eating habits, the Shadow Monster's powers far exceed that of a mere D&D Shadow.

When it comes to the size of the Shadow Monster, the closest thing you're likely to find in D&D is the horrifying Tarrasque. Referred to as "the most dreaded monster of the Material Plane" in the Monster Manual, the Tarrasque stands 50 feet tall and is 70 feet long. The Manual description reads:

"The destructive potential of the tarrasque is so vast that some cultures incorporate the monster into religious doctrine, weaving its sporadic appearance into stories of divine judgment and wrath. Legends tell how the tarrasque slumbers in its secret lair beneath the earth, remaining in a dormant state for decades or centuries. When it awakens in answer to some inscrutable cosmic call, it rises from the depths to obliterate everything in its path."

The devastation that the Tarrasque is capable of makes it a fitting comparison point for the Shadow Monster, who seems to be attempting to leave its "secret lair" of the Upside Down to obliterate Hawkins.

SPOILERS FOR SEASON 2 OF STRANGER THINGS: Dustin — Stranger Things' most reliable source of nicknames — determines that the Mind Flayer of D&D is the most appropriate comparison for the Shadow Monster. The Monster's namesake comes from a beast with a humanoid body and a Cthulhu-esque head that is capable of controlling legions of creatures with its mind. Once Dustin and the gang realizes that the Shadow Monster is the one controlling the demodogs, it's clear the beast's size is the least of their worries.

Of course, no one even sees the Shadow Monster except for Will. All of Will's friends are scared, but if they knew everything there is to know about the Shadow Monster, there's a chance they wouldn't even bother fighting back. For all the monsters in Dungeons & Dragons, there is no one creature that properly communicates just how terrifying the Stranger Things Shadow Monster truly is.

More like this
Caleb McLaughlin Details Racism From 'Stranger Things' Fans
By Radhika Menon
Kate Bush Revealed The Real Meaning Behind 'Running Up That Hill' Lyrics
By Darshita Goyal
Nicola Coughlan Shared A Lady Whistledown Excerpt From ‘Bridgerton’ Season 3
By Grace Wehniainen, Alyssa Lapid and Sam Ramsden
Twitter Is Pouring Out Some Zhampagne As ‘Schitt’s Creek’ Leaves Netflix
By Brad Witter
Get Even More From Bustle — Sign Up For The Newsletter