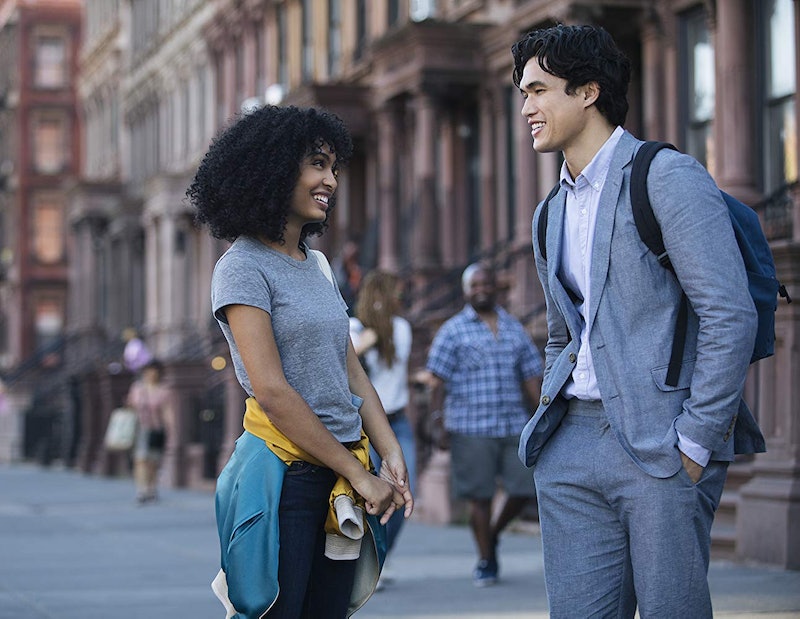 Some of the most heartwarming love stories are based on true events. Think Eat, Pray, Love, The Theory of Everything, The Vow — the list goes on and on. Because these movies are based on real stories from real people, they're also really relatable. The Sun Is Also A Star, which premieres on May 17, is very honest and authentic in its portrayal not only of a teen love story, but also of an immigrant narrative, as it follows Natasha Kingston (Yara Shahidi) through her last day in the US, as she and her family face the threat of deportation. It's a tale that speaks to current events, but is The Sun Is Also A Star based on a true story?

The film is an adaptation of the New York Times bestselling young adult novel of the same title, written by Nicola Yoon, author of Everything, Everything. And while it isn't exactly based on true-to-life events, it takes a little bit of inspiration from the author's own life. As she described to HuffPo, like her lead character Natasha, Yoon is an immigrant from Jamaica who moved to Brooklyn when she was 11. Meanwhile, her husband David Yoon, is Korean-American, just like Natasha's love interest Daniel Bae (Charles Melton). But despite these parallels with her life, Yoon told the publication that the story is still, for the most part, fictional.

In the book and the film, Natasha is a realist who meets Danielle, an idealist, whose parents own a Korean store in New York City. The two meet one fateful day, instantly click, and Daniel decides to spend 24 hours to try and convince Natasha that destiny is real. But once their time together is up, the two have to deal with the outside forces working against their newfound love.

While the plot itself is imagined, Yoon did draw from her family's story and her own. "I really wanted to write about the immigrant experience, you know, being trapped between two worlds and not really being part of either," she told HuffPo.

In an interview with Marie Claire, she emphasized the story's importance within our current political climate, wherein anti-immigrant sentiments seem to be spoken louder and more brazenly than before. "With some of the immigration issues I talk about in the book, it's really important for me to say to the world that America is a better place for having immigrants in it and that there is no difference between someone who comes to America and someone who was born in America, in terms of how patriotic they are and how much they love this country and how hardworking they are," Yoon said. "Right now, with the administration the way it is, I think we need to say that loudly."

Natasha and Daniel's romance itself is predicated on the relatively unrealistic and highly-unlikely occasion of two people falling in love in one day, but for the author, it's about the circumstances. "I really wanted to tell a love story through all of the things it takes to make a love story — all of the other people besides the people who are in love," she explained to Marie Claire. "When two people meet at a moment in time there's all of the stuff that got them to that specific place — the random events with other people they have interacted with that day, their families, their ancestors. There's a huge chain of reaction of things that happen that get you to this point in time."

A Sun Is Also A Star may be a work of fiction, but that doesn't make it any less true. It's a story with two complex, three-dimensional, very real characters that are going through real experiences, and that have found real love. And all the feelings you'll catch after watching the movie will also be very real, so have your tissues handy.