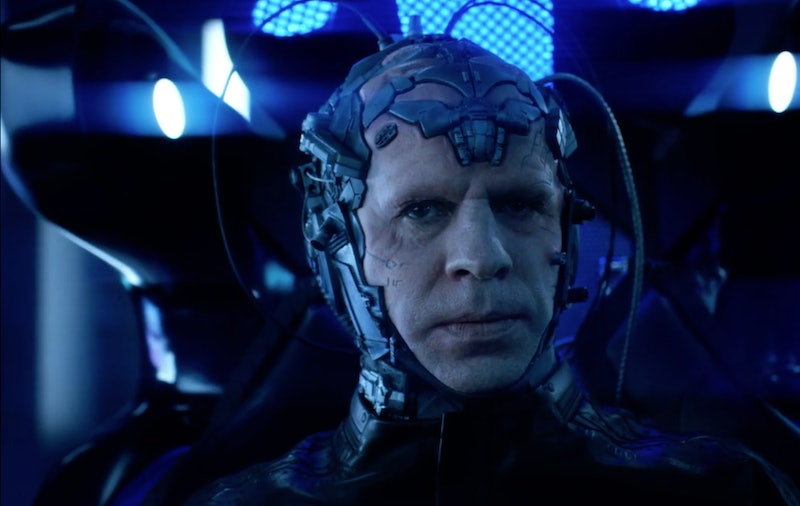 So far, The Flash Season 4 has a lighter tone than the previous two seasons, but there's still a big bad who's causing trouble in Central City. The Thinker is a super intelligent Flash villain who will fight the S.T.A.R. Labs team using his intellect, rather than physical speed. The Thinker made his debut at the end of the Season 4 premiere episode, looking terrifying in his wired-up floating captain's chair. The TV series has mostly focused on super-villain speedsters from DC comics such as Zoom, Reverse Flash and Savitar in the past. So, is the Thinker from the comics, or is he an original creation?

The Flash TV series uses the comics as a source of characters, storylines, and world specifics. The Thinker is a villain that has multiple incarnations in the comics, and it will be interesting to see what the show takes from these various plots and personalities. Originally, the name of the Thinker was used by inventor Clifford DeVoe, which is also the given name of the character in the TV series.

In the books, DeVoe was an inventor who created the "thinking cap", similar in style to the one previewed in the Season 4 premiere. His thinking cap is a metal head covering with the ability to project mental force and gave DeVoe powers such as telekinesis and mind control. Clifford DeVoe first appeared in the comics in 1943 in All Flash #12 and was killed off in Flash Volume 2 #134 in 1998.

And this is where you may need to put your own thinking cap on, because it's about to get complicated. The Thinker was reincarnated when his thinking cap was used by hyper intelligent high schooler Clifford Carmichael who was the enemy of Firestorm. It was then used by Desmond Conner, who was enemy of Batman's. And later, it didn't need a human. Eventually, the Thinking Cap was known as an artificial intelligence originally created by Mister Terrific to be a device used for good.

The Thinker that made his TV debut on The Flash is a DeVoe reincarnation. While DeVoe in the comics has a long and complicated origin story that probably won't be covered, there are some interesting tidbits that could come into play on the show. Already, The Flash has given him a villain sidekick called the Mechanic, who's also originally from the comics.

During his run in the comics, the Thinker fought Jay Garrick. They have a long history, so we may see a reemergence of the original speedster in the series. The Thinker ultimately becomes good in the books, reforming at the end of his life. It will be interesting to see if the TV character follows this same trajectory. And though it's the cap that makes the Thinker powerful, it's also what makes him sick and kills him, in the end. Any of these details could be borrowed for the show.

The Thinker is a prominent presence in the comics of the comics and should present new challenges for the good guy team. CBR.com reported on what executive producer Andrew Kreisberg had to say about the Thinker in a behind-the-scenes featurette that's no longer available. He said:

"We really wanted to do something different, we’re positing it as the world’s fastest man versus the world’s fastest mind...So much of his previous seasons have been about training harder, ‘I have to run faster,’ but he’s up against a villain this season that he can’t outrun. It’s somebody he has to out-think, and it’s going to take him and Cisco and Caitlin and a few other surprise people to be able to get one step ahead of the Thinker."

The Flash will develop this new villain throughout the season, slowly revealing truths, as it always does with the ultimate bad guy. Only time will tell what the show will borrow straight from the comics and what original details it will invent.