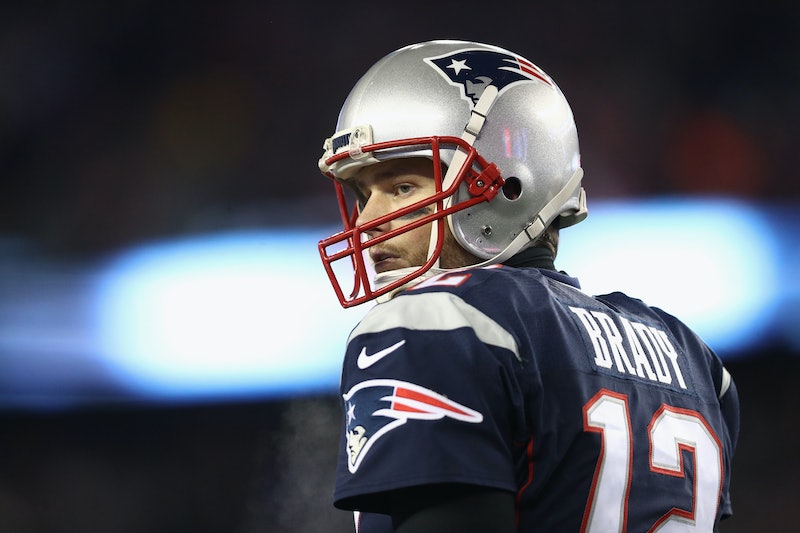 Exactly who will be attending Donald Trump's inauguration on Jan. 20 has been a topic of much discussion this week, with many people trying to determine which high-profile individuals may — or may not — be present. Knowing whether or not Tom Brady is going to the inauguration may not seem like one of the most pressing issues to consider; neither a politician nor a pundit, whether or not Brady will be there doesn't feel like it bears quite the same weight as whether Elizabeth Warren or Hillary Clinton will attend. As right now, Brady hasn't confirmed or denied if he'll be in D.C. to see Trump take office, but we have some reason to believe he is not only a fan of Trump's, but in fact, a friend. Let's break down the information we have as of right now. (Bustle has reached out to Tom Brady's camp for comment but received no reply by press time.) Update: According to reports, Donald Trump announced at an inauguration dinner on Jan. 19 that Brady called to congratulate him.

We do know that Trump has referred to Brady as a friend of his; what's more, the president-elect himself suggested that Brady did, indeed, vote for him. While at a campaign rally in New Hampshire, Trump spoke to the crowd and said: "Tom Brady, great guy, great friend of mine, great, great champion, unbelievable winner. He called today and he said, ‘Donald, I support you, you’re my friend, and I voted for you."

Brady had in the past called Trump "a good friend" as well; however, on the same day that Trump claimed Brady told him he had voted for him, Brady himself responded to a question of whether he had voted yet that same day in the negative. "No, I haven't voted yet," he told the Kirk & Callahan talk radio show, according to ABC News.

There's also this: Now, while we don't know what people's private conversations actually entail, Brady's wife, Giselle Bundchen, seems to suggest the couple does not in fact support Trump. In response to an Instagram comment left on her own page from a follower, Giselle responded by saying "NO!" when the user asked if she and her husband were Trump supporters.

Of course, it's entirely possible that Giselle was talking about herself only, or that some couples don't talk about who they are voting for, or simply vote for different candidates. But it's an interesting moment either.

More evidence that suggests that Brady was a Trump fan? He was spotted with and later confirmed that he had a "Make America Great Again" hat in his locker. But as Tanya Basu explained at TIME, Brady's rationale doesn't necessarily suggest he is actively voted for Trump, either. “[Trump] sent [the hat] to me via R.K.K.,” Brady said according to TIME, referring to Patriots owner Robert Kraft. “He always gives me a call and different types of motivational speeches at different times. So now that he’s running for president, he sent me a hat, and he gave it to R.K.K. a couple weeks ago. So it found its way to my locker.”

You can be friends with someone without supporting their political beliefs, of course. And as of right now, Brady hasn't either confirmed or denied if he'll be at the inauguration; he's also kept quiet about who he actually voted for in the presidential election. But if you're in the crowds on Inauguration Day, definitely keep an eye out for number 12 — though he probably won't be in his Pats jersey.