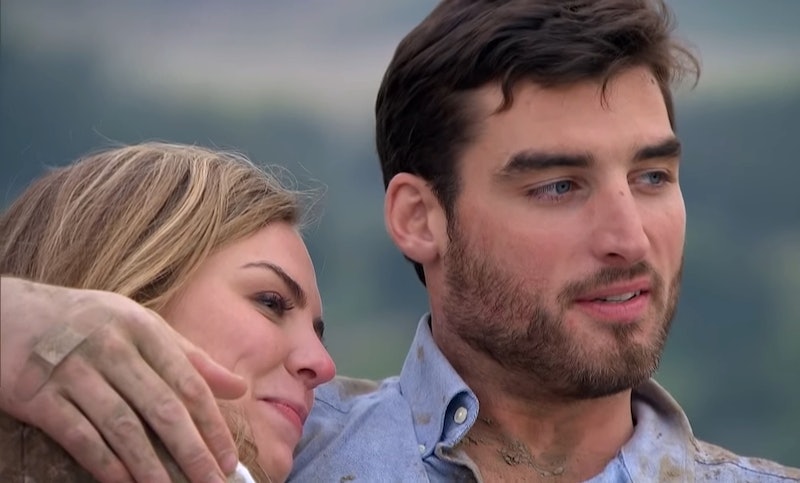 Rather than having to participate in a Mr. Right pageant or a roller derby, Tyler G. got to be the first person to spend some precious solo time (and keep a little dignity) with Hannah B. But that could still mean Tyler G. is single after The Bachelorette. As Hannah knows from her time on Colton's season, the first one-on-one date doesn't guarantee that you'll be the last person standing when the season is all said and done. And based on how far previous first one-on-one date recipients have made it, it looks like Tyler G. may not go all the way.

When Hannah's season of The Bachelorette started, Tyler G.'s Instagram was set to private. He switched it over to public shortly after, but because contestants aren't allowed to spoil anything, there aren't many clues on his social media about his current relationship status. All of his recent posts are Bachelorette-specific and before he was cast, Tyler hadn't posted anything since June 2018. So with his Instagram not providing any clues, perhaps it's best to look at how other first one-on-ones have turned out. Of course, it all depends on the connection that the individuals share, but there does seem to be a pattern on The Bachelorette.

For instance, when it comes to the first impression rose on The Bachelorette, the recipient usually has a good chance of winning (although fans are hoping that Hannah will break that tradition with Luke P. this season.) However, the first one-one-one date stats aren't as promising, because even if the first date guy goes far, he never seems to win in the end.

In the last two Bachelorette seasons with Becca and Rachel, their first one-on-one dates — Blake and Peter, respectively — ended up being the runner-ups. Both of Desiree and Ali's first one-on-one date guys made it to the final three and coincidentally, both Brooks and Frank quit. Considering Ali just revealed on The Bachelorette reunion special that she hooked up with Frank one last time after she and Roberto ended their engagement, who knows if she would have picked him if he hadn't had left. But that doesn't change the fact that the men who get the first one-on-one date rarely receive the final rose— and that just might be Tyler's future too.

The contestant who goes on the first-on-one date is clearly someone the Bachelorette has a good first impression of. Because of that — and the fact she barely knows the other men — they usually receive the rose during that first hangout. That was no different for Hannah and Tyler's first one-on-one, since she gave him the date rose. But that doesn't mean he'll stay for long. In the instances of Kaitlyn, Jen, and Meredith, they each had a change of heart and all sent their first solo dates home the very next week.

During Tyler and Hannah's date, there didn't seem to be a lot of substance to their conversations, based on what was shown on TV. Hannah opened up about how she felt overwhelmed when she got the first one-on-one with Colton, which led to her shutting down (and her fumbled but oh-so-relatable toast). But we didn't learn too much about Tyler.

So, fans will have to wait and see how Tyler's fate shakes out. Based on the show's track record, Hannah's initial attraction to Tyler G. doesn't necessarily mean he's "her person," so it's pretty likely that he is single at the end all of this — or at the very least, not with Hannah B.

More like this
Here's What Happened After Rachel & Aven Left The 'After The Final Rose' Stage
By Grace Wehniainen
Here's Exactly When Rachel & Tino's Fight Happened After 'The Bachelorette'
By Grace Wehniainen
Erich Addressed His Text Message Scandal & Twitter Is Divided
By Kadin Burnett
Is Salley Actually Going To Be On 'Bachelor In Paradise'?
By Kadin Burnett
Get Even More From Bustle — Sign Up For The Newsletter