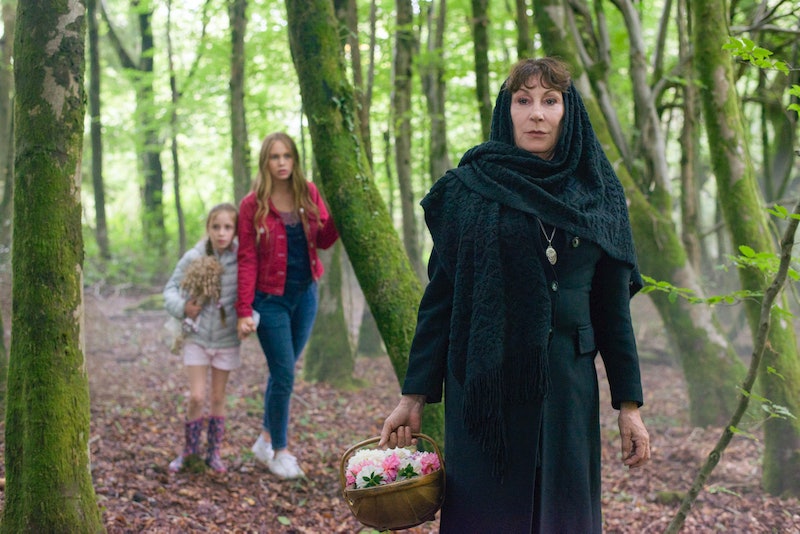 October is the month of trick-or-treating, candy corn, pumpkin spice lattes, but above all, it's the season of scary movies. And for those who love to be scared, look no further than the new Lifetime movie Watcher in the Woods, which premieres Oct. 21, to fulfill your horror movie craving. The film, directed by Sabrina the Teenage Witch star Melissa Joan Hart, tells the story of two sisters who are drawn to the strange things occurring in the woods surrounding their new home, and the mystery of a woman (Angelica Houston) who lost her daughter Karen 20 years ago. The story is creepy for sure, but seems just plausible enough that it might have some basis in real life. Is Watcher in the Woods based on a true story?

Thankfully, the horror movie is a work of pure fiction, so hopefully that will help you sleep better at night. But, the 2017 Lifetime version of this film does have a real inspiration. This new movie is based on the 1980 cult classic, The Watcher in the Woods. And that movie, which was released by Disney, was based on 1976 novel by Florence Engel Randall, titled A Watcher in the Woods. Director Melissa Joan Hart had a lot of material to work with when setting out to create her own adaptation of the much beloved horror original.

"What I love about our reimagining is that we took what was like a family friendly thriller with a sci-fi twist, we took the sci-fi out of it," Hart tells Bustle's Anna Klassen in an interview at San Diego Comic-Con. "[The sci-fi twist] was so confusing ... the original movie had so many endings that they actually pulled it from theaters and redid the ending numerous times because the audience wasn’t responding to it," she says. "So we just said, 'You know what? Let’s get rid of the sci-fi bit of it and just make it a straight up gothic horror story."

But even though Hart was able to make the Lifetime version of the story her own, she still felt it was important to stay true to some of the material from the original film. "There were a few scenes that ... I had to keep — that were just things that I remember from 20 years ago. Well, more than 20 years ago, but the last time I probably watched [the original movie] was 20 years ago. And I just really wanted to keep certain things," she shares.

A unique element of the original The Watcher in the Woods film was its appeal to kids and adults alike. It was released by Disney, originally in 1980, and then again in 1981 with a revised ending that faired much better with critics, according to The New York Times. The movie was geared towards families with kids who wanted to watch a compelling ghost tale that was more accessible and less horrifying than other popular horror movies of the '80s, such as A Nightmare on Elm Street.

Hart sought to make her version equally family-friendly. "There were a few movies I could watch that really were just about these spooky things happening that had no mental image that would keep you up at night or haunt you the rest of your life you know?" she says. "So that’s why I think it’s good for families."

Even if you've never heard of the original movie, Hart is sure that her remake will create a whole new generation of fans of the cult classic. "It was such an iconic movie for my generation," she says. "A lot of people say that it was their first horror movie, first thriller, first intro into that genre — but also, like, what they watched at sleepover parties and with their family and whatnot. So it’s just one of those movies that people hold near and dear, and really has a cult following." Hart continues, "Hopefully a new generation of people who never knew about it back then will get a chance to experience it. So it’s just something we’ve really been wanting to do for a long time so we’re finally getting the opportunity."

You can watch that opportunity come to life on Oct. 21 on Lifetime at 8 p.m. ET.

More like this
These 25 International Horror Movies On Netflix Prove Fear Is A Universal Language
By Bustle Editors
Is 'The Woman King' Based On A True Story? The Female Agojie Warriors Did Exist
By Radhika Menon
Paul Mescal, Man Of Mystery
By Samantha Leach and Heather Hazzan
What’s New On Netflix: Ana De Armas’ 'Blonde' & A Nick Kroll Special
By Arya Roshanian
Get Even More From Bustle — Sign Up For The Newsletter