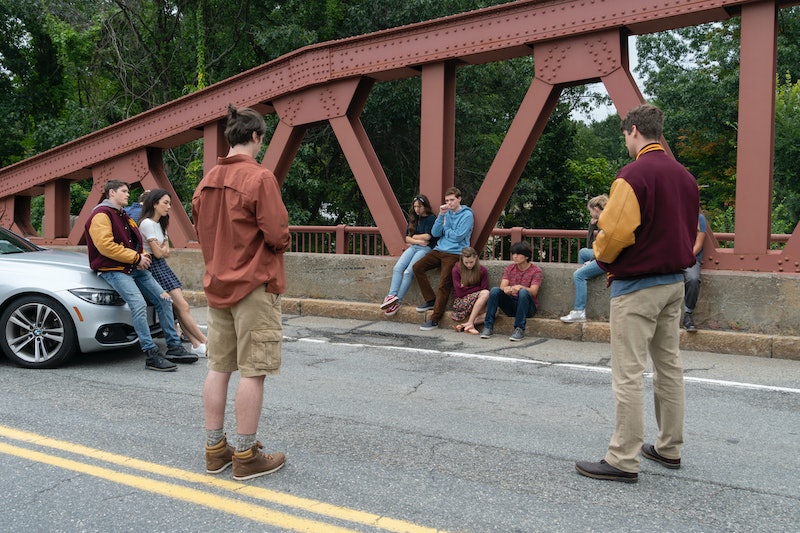 What if all the adults in your life suddenly vanished one day, and you were trapped in a sleepy, New England town with only the students from your high school? That's the premise of Netflix's The Society, premiering Friday, May 10. The Lord of the Flies-inspired drama is set in a small, suburban area called West Ham, which is the perfect backdrop for its spooky plot. And although The Society's West Ham is not a real town — at least in America — fans will likely be grateful for that fact once they finish watching Season 1.

As the show's trailer reveals, the Society teens decide to make some changes after they realize they're stranded alone in their town. The first step? Renaming it New Ham. "Everything that kept us safe is gone," Cassandra (Rachel Keller) says. "There's no civilization here — not until we start one." But for those who read Lord of the Flies in high school, it's no surprise that things go downhill fast.

Not only do the teens split into two factions, but one group becomes violent, refusing to follow the newly established rules. Cassandra appears to step up to the plate as New Ham's leader, but her cousin, Campbell (Toby Wallace), has other ideas. "We're not going to ask for power," he says in the trailer. "We're going to take it."

As for where this power struggle will go down, there is a township called West Ham in Statford, England. But as is evidenced by the American flag flying above Main Street, The Society is obviously set in the U.S. According to Time, West Ham is meant to be a wealthy town in New England. The Telegram reports that the show was technically filmed in Lancaster, Massachusetts, though per TV Guide, it's set in Connecticut. (According to the Massachusetts Film Office, The Society also filmed in the towns of Ayer, Bolton, Carlisle, Concord, Devens, Grafton, Groton, Harvard, Lexington, and Sterling.)

This isn't the first time Lancaster has been used for filming, by the way. "We're getting used to it. We're getting to handle it pretty well," Town Administrator Orlando Pacheco told the Telegram. "We've been through it a bunch of times with Castle Rock and Slender Man. We got a pretty good routine on how we deal with the production teams. So it just gets easier and easier for us."

And it seems like it was a good thing for Lancaster, as it brought in both revenue and recognition. "I think things have gone well so far," Pacheco told local publication the Landmark back in September 2018. "We have received $17,000 in site location payments and reimbursed for all staff time. We have received a lot of positive feedback about the gazebo, but we also did receive some complaints about the lack of parking or the needs to occasionally close the road. Unfortunately, these are part of the filming process and we do make every effort to minimize the interference."

So no, West Ham is not a real town, but clearly, there's a reason that so many production crews flock to Lancaster. It's a beautiful, nondescript northern town that fits the bill for a variety of projects — and apparently, particularly those with creepy, mysterious plots.

More like this
Mike Flanagan Teases 'The Midnight Club' In This Exclusive, Creepy Clip
By Grace Wehniainen
Twitter Is Pouring Out Some Zhampagne As ‘Schitt’s Creek’ Leaves Netflix
By Brad Witter
Jeffrey Dahmer’s Arresting Officer John Balcerzak Got His Job Back After Being Fired
By Grace Wehniainen
Here’s Where You Can Stream 'Schitt's Creek' After The Comedy Leaves Netflix
By Brad Witter
Get Even More From Bustle — Sign Up For The Newsletter