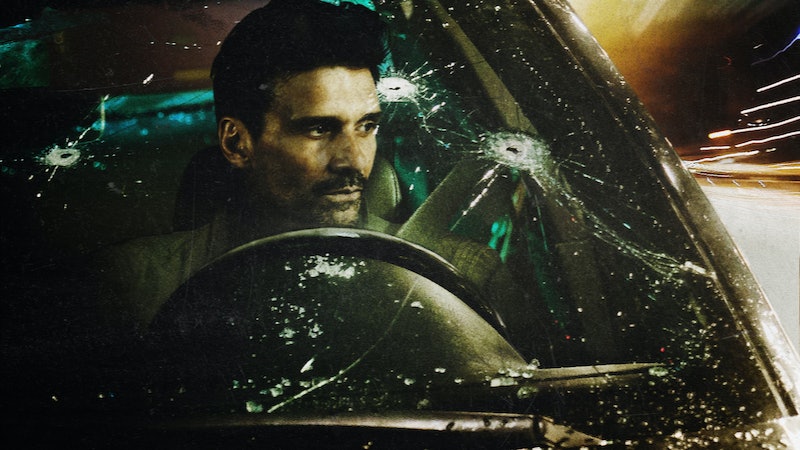 Between Baby Driver, Drive, and The Transporter series, The Getaway Driver is having a serious moment as a character archetype. Joining the list is Netflix's soon-to-be-released crime thriller Wheelman. It's not based on a true story, but the fictional film follows a nameless driver (played by Frank Grillo) who brings two crooks to their drop point. A mysterious "Out Of Area" call claiming to be the heist's orchestrator comes in on the driver's console-mounted phone, telling him if he doesn't ditch the crooks and drive away with the loot, they'll kill him. From there, things go very south very fast as the driver scrambles to regain control of an increasingly murky moral situation.

Later, his family and life are threatened as he tries to figure out who's behind the voice in his earpiece, what they really want, and how he can get out alive to see his wife and daughter again. This all happens while the driver whips around the city at top speed in a BMW M3, as you do. With so many "man behind the wheel" tales, it'd be reasonable to think that Wheelman would be based on a true story, but this particular combo of fast cars and stoic guys is purely fiction. Appropriately-named director Jeremy Rush said in an interview with Film School Rejects that his main idea was to evoke a '70s grit and style, without overt stylistic references, in the movie.

"I love Bullitt. I love Thief… Of course, Drive was an influence, Nightcrawler, Vanishing Point... Yeah, a lot of those ’70s kind of hard-boiled crime thrillers," Rush explained. These films aren't necessarily based on specific true stories, but have a firm foot in the real world, as each show a gearhead's obsession with tech and detail. The method of heist-planning and putting together a crew, the car's make, model, engine, modifications, and a real understanding of vehicle performance and timing all add a thick layer of verité, even to tales that take more than a little artistic license.

Casting also played an important part in Wheelman's believability. In an interview with FSR Rush said, "You know, there’s a lot of man’s men kind of throwback Charles Bronson, Steve McQueen-esque kind of actors... Frank was definitely the right guy for this. He’s got the face for it. He’s got the chops for it, and the mannerisms." Grillo also brought some reality to the role himself; in an interview with Autoweek, he said he based his driver on the men he grew up with in the Bronx.

"In the beginning, maybe some of them got some success taking shortcuts, but as we get older, the nobility of being a hustler fades, you have to face reality and then you’re stuck. So I know those guys and I know how they think. I know how myopic they can be, and that’s how they approach life and that’s how I approached this guy."

It doesn't hurt that Grillo himself is a professed gearhead, though his garage is full of motorcycles and dirtbikes instead of the movie driver's flashy vintage Porsche 911.

In Wheelman, the driver gets into a bit of a mess, leading to him taking on the infamous One Last Job in order to leave the game entirely. In this case he owes a favor to his mob connections, the kind you have to return if you want to go back to a normal life. His ex-wife and he are estranged, but he's trying to connect with his 14-year-old daughter. Interestingly, the real-life tale most similar to Wheelman's fast-paced, mafia-spurred action comes from a former model and mom who ended up a getaway driver for the mob.

As NPR reports, Georgia Durante impressed a room of older mafioso by flooring it through traffic to get a man to the hospital after he was shot. From there, she became their go-to getaway driver until she fled from the mob and an abusive marriage. Driving cross-country with her daughter and trying to keep a low profile, she decided to make a living the best way she knew how. You don't see the face of the driver in car commercials, so Durante hung out on sets, pestering directors for work. They said no... until they saw her behind the wheel. After that, she had to turn work away, and now makes a successful living as stunt driver.

Truth is nearly always stranger than fiction, and while Wheelman might not be based directly on a true story, it's true enough to the art of driving to satisfy fans of the genre.