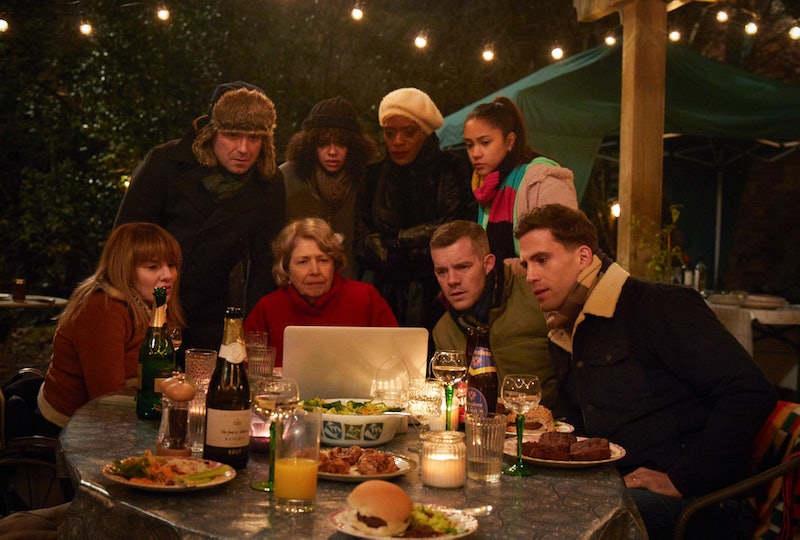 If someone told you a decade ago that in 2019 Donald Trump would be President of the U.S. and that Britain decided to leave the European Union, you'd probably think that was a work of fiction. Sadly it's not, but the absurdity of reality today has inspired Russell T Davies to see where the world is headed in a new BBC series premiering tonight (May 18). But is Years And Years based on a true story, or is it just loosely inspired by current events?

Well, kind of. Obviously, the show is depicting a possible future, but as Davies told Radio Times in February, he's captured the current scope of madness to try and "guess where we're going." I've reached out to a representative for the show to expand on this, and have yet to hear back. Luckily, Davies has given a lot of insight into how the idea for Years And Years came about in the first place, and how he (and eventually the BBC) wanted to get it on air ASAP.

"We're actually racing to get Years And Years on air because it's so topical!" the creator told Radio Times. "The BBC's taken a look at what we've got and said: 'Get this on air now!' For instance, for the show I invented a Russian invasion of Ukraine with a whole load of refugees entering the UK. At Christmas, their gunboats started tussling with each other, and we were all watching it thinking 'oh my God, this is happening!'"

Years And Years has spent, well, years in production, but it wasn't until the night of the last Presidential election that Davies decided to bring the show to life. "It was the night of Trump's election when I emailed Nicola Shindler [executive producer] and said: 'If he gets into power I should write this now," he told iNews. "And I've never been more sorry to be right."

Even though the series began at a pretty low point in 2016, Davies is excited (and slightly apprehensive) to see whether any of the ideas portrayed in the show will actually come true — and believe it or not one of them is already happening as he explained to iNews. "Well my favourite thing is happening already, and that's the Whatsapp group. It's transforming family life, right in front of my eyes."

"I've got nieces and nephews aged from 21 to 29, and a few years ago, much as I love them, I'd only text them twice a year, birthday and Christmas. But we opened up a family group, and now 20 or 30 texts fly between us every night. Technology has made us closer. And I've shown this with the Lyons family — they're an extraordinarily close-knit bunch because they all talk to each other all the time. And I've dramatised that fully — I can guarantee, some of those group conversations are truly shocking!"

While the innovation and growth of technology are continuous, Davies hasn't gone down the Black Mirror route and made it one of the main aspects of Years and Years. Instead, he wants viewers to take away the bond and love that the Lyon family share. As he told iNews, "I hope we've got some insights into society, and politics, and technology, but that's irrelevant compared to good characters."

Years And Years starts tonight at 9 p.m. on BBC One, and will continue weekly for six episodes.