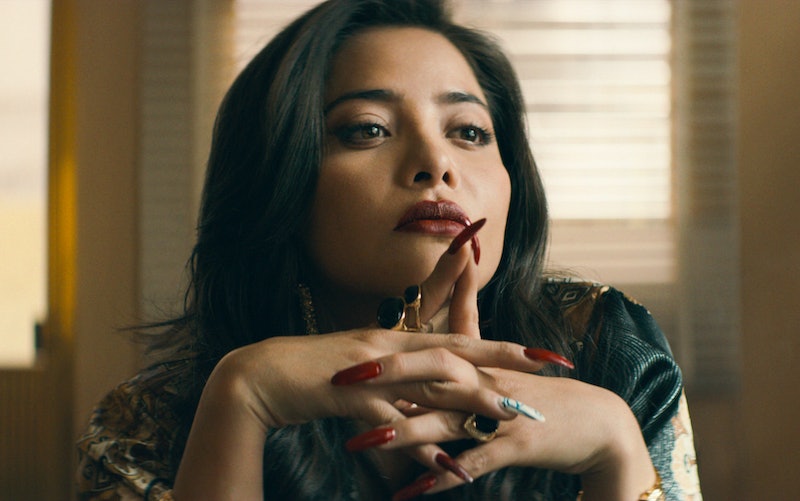 Though Teresa Ruiz' Narcos: Mexico character, Isabella Bautista, is fictional, she does draw heavily from a larger than life figure: Sandra Ávila Beltrán. During the rise of the Mexican cartels in the 1980s, Beltrán was the link between cartel leaders in Colombia and Mexico, and in Narcos: Mexico, Isabella seems to serve a similar role. It's Isabella who suggests that Diego Luna's Félix Gallardo expands into trafficking cocaine, for example, and he brings Isabella along to act as a go-between for Colombia’s Medellin and Cali cartels.

Per The Guardian, Beltrán was known as "The Queen of the Pacific," a reference to her alleged success at once organizing a fleet of cocaine-laden tuna boats that traveled from Mexico's Pacific Coast to the United States. She moved through the highest levels of cartel life, and was at the height of her power in the '80s and '90s, complete with private jets, shootouts, and the bribing of Mexican officials.

Beltrán was born in 1960 into cartel royalty: her father was related to Rafael Caro Quintero, one of the Guadalajara cartel founders. Growing up, Beltrán had private tuition, art lessons, and lavish vacations; seeing piles of money around the house was routine for her. So was witnessing the violence that came along with a crime-dependent lifestyle: Beltrán told The Guardian that she witnessed her first shootout at just 13-years-old.

At one point her life seemed to be on track to be an investigative reporter, but at 17-years-old, Beltrán was kidnapped by a jealous boyfriend while enrolled in communications studies at the Universidad Autónoma de Guadalajara. This experience forced her to drop out of classes, and as a result she entered into drug trafficking.

Beltrán was a fast learner, so she rose quickly through the cartel ranks, amassing a vast array of wealth and notoriety. Though she knew how to use flirting to move through the world, she was also determined to be respected: "Women are looked at as objects, adornments, or a necessity [in the drug world], but never as a fighting being, or a person made of triumphs and achievements," Beltrán explained to The Guardian.

Though Beltrán can be considered a pioneer of sorts in the field, she was also undoubtedly an agent of chaos, who helped fuel a drug trade that cost thousands of innocent lives and endures to this day. To this point, The Guardian says that Beltrán feels no guilt at all, viewing drug violence in Mexico like Prohibition-era violence in the US.

“Narco trafficking is a business that has [just] not been legalized,” Beltrán said. “It is a business like alcohol [during prohibition] which was not legal … In those days an alcohol salesman was considered a bad person but when they legalized it, the people who sold it became respectable. I don’t see that alcohol or tobacco salesmen feel guilty. You go to a restaurant and a bar and the owners don’t feel guilty.”

Beltrán's fortunes eventually turned sour in 2002, and after years on the run from the government, she was arrested on September 27, 2007. She served over seven years in prison before she was released in February 2015.

Similar to Beltrán, Ruiz' Isabella is ruthless, intelligent, and determined to rise through the ranks of the male-dominated cartels. It's a lot to take on, Ruiz told Refinery29, as she balances playing a woman "slowly finding her worth and her strength for her own" while also critiquing the systems that Beltrán ultimately helped to fuel.

“There’s been so much suffering. My country has shed blood over this. It was always very astonishing to me to wonder how a person can do all this, just because they want money and power,” Ruiz said. She recalled the way her border towns were ravaged by the drug wars, and how reenacting those scenes as Isabella is often "hard to shoot ... and hard to watch them."

Still, Ruiz sees value in portraying even a fictional spin off of Beltrán. "What I like about Narcos: Mexico is that it is one of the few very responsible shows that shed light on an issue that needs to be talked about and remembered," Ruiz told Entertainment Tonight. "Because as we remember our past, then we understand our present, and then we can then change our future."

More like this
Glenda Cleveland Died 2 Decades After Trying To Turn In Neighbor Jeffery Dahmer
By Brad Witter
Caleb McLaughlin Details Racism From 'Stranger Things' Fans
By Radhika Menon
Mike Flanagan Teases 'The Midnight Club' In This Exclusive, Creepy Clip
By Grace Wehniainen
What’s New On Netflix: Ana De Armas’ 'Blonde' & A Nick Kroll Special
By Arya Roshanian
Get Even More From Bustle — Sign Up For The Newsletter