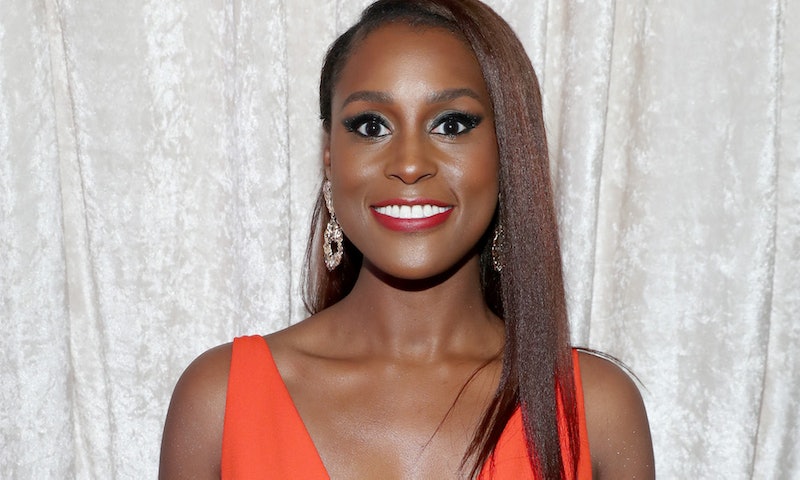 Insecure star, writer, and creator, Issa Rae’s comments about interracial on-screen romances will make you fall in love. Fresh off her viral stint as Oscar nominee presenter, the Insecure star spoke to Variety in an interview published on Saturday and reflected on the current state of romance films. This year, Rae stars in not one, but two romance films alongside leading men of color: The Photograph, a drama with Lakeith Stanfield out on Feb. 14, and The Lovebirds, a comedy with Kumail Nanjiani out on April 3.

Rae addressed the diversity in romance films and told Variety, “Every time there’s an interracial romance, it feels like it centers on whiteness, and it doesn’t have to.” She added in a deadpan, “Just so you know, there are people who don’t procreate with just white people.”

Written and directed by Stella Meghie, The Photograph intertwines two love stories set in the past and present. When her estranged mom, a famed photographer, dies, Mae (Rae) discovers old photographs that offer insights into the late woman’s life. The findings lead to a relationship with a journalist named Michael (Stanfield). Rae likened the black love story to one of her favorite films, 2000’s Love & Basketball.

As for The Lovebirds, Rae recalled the coupling featured in the 1991 Denzel Washington and Sarita Choudhury rom-com Mississippi Masala. Written by Aaron Abrams and directed by Michael Showalter, The Lovebirds follows a couple (Rae and Nanjiani) on the brink of a breakup who suddenly find themselves embroiled in a bizarre murder mystery. According to Rae, the script initially called for white leads that would've otherwise altered the film's plot.

“Initially they were written for white people, which, plot-wise, would have been a different story,” she told Entertainment Weekly in January. “It’s not a story about race but we wanted to acknowledge our race and the fact that we’re an interracial couple.”

While she’s long championed on-screen representation, Rae admitted to Variety that she’s grown tired of fielding questions about diversity. “I don’t feel like it’s up to me to answer those questions. Like, I’m doing the work,” Rae said. “I’m out here. I’m employing who I need to employ. I’m telling the stories that I need to tell. Those questions need to be asked to the powers-that-be. It needs to be asked to the white people who run this industry.”

More like this
Olivia Wilde Addresses *Those* Florence Pugh & Shia LaBeouf Rumours
By El Hunt and Sam Ramsden
Here’s Everything Coming To & Leaving Netflix In October
By Jake Viswanath
Paul Mescal, Man Of Mystery
By Samantha Leach and Heather Hazzan
Florence Pugh Reflected On Her ‘Don’t Worry Darling’ Experience On Opening Day
By Brad Witter
Get Even More From Bustle — Sign Up For The Newsletter