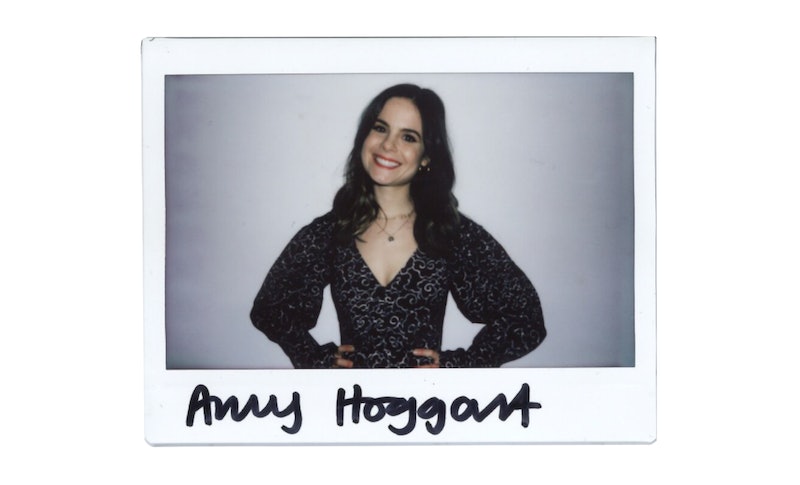 When celebrities hang out with Bustle writers, we want to give them the chance to leave their mark. Literally. So we hand them a pen, a piece of paper, a few questions, and ask them to get creative. This time, It's Personal star Amy Hoggart is leaving her mark in the Bustle Booth.

“Something that really amazes me is how few people understand how TV works,” says Hoggart, puzzling over the general eagerness to step up to a hot mic. “In a late night show, we're trying to be funny, but we're also going to win. There's no way that they are going to edit these people particularly well.”

It’s a script she’s literally flipping with her own late night entry, It’s Personal with Amy Hoggart, which premieres February 26 on TruTV. In the docu-style series, real people face their everyday problems, like anxiety, loneliness, and grief. With natural empathy and ditzy wit, Hoggart plays an exaggerated version of herself who arranges obstacle courses of immersion therapy for her “clients”. (You’re struggling with body image? Try letting a caricaturist draw you!)

“Something that I struggled to find balance with is that these are real people talking about their problems and people get vulnerable with me, and then I'm not going to be a comedy character,” says Hoggart, who studied psychology in grad school at the University of Sussex. “I'm just going to react as myself.”

She's mindful that she wasn't the first late-night correspondent tapped to make a pilot — Sam Bee herself was a correspondent on The Daily Show before Full Frontal. “Some of the shows are amazing and some fade into oblivion,” Hoggart says. The shift away from current affairs came from asking herself, "Why me and why would my show be different?"

The result is 30 minutes of compassionate, quirky TV that puts Hoggart back on the side of the joke that suits her. “In Full Frontal, the correspondents are quite high-status and often the butts of the joke are the Trump supporters,” she tells me. But it's not fun to laugh at a 24-year-old with anxiety; it's got to be Hoggart taking the comic hits.

“I'm 100% more comfortable being the butt," she says, relishing the reversal. "You can lead with that.”

More like this
Bustle Daily Newsletter: October 4, 2022
By Hayley Schueneman
'Interview With The Vampire's Lestat Is Sam Reid’s Biggest Role Yet
By Kadin Burnett
Mel C Wants You To Know That Margaret Thatcher Wasn’t A Spice Girl
By Darshita Goyal
How Much Are The 'Schitt’s Creek' Stars Worth?
By Hugh McIntyre
Get Even More From Bustle — Sign Up For The Newsletter