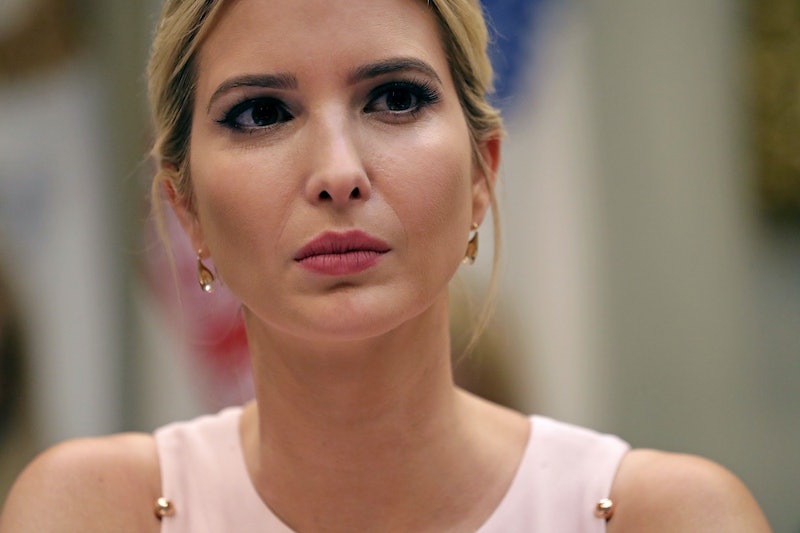 According to a recent report from Vanity Fair, White House aides have a nickname for Ivanka Trump, and it's perhaps not as flattering as the first daughter would like. The report reveals that White House aides call Trump "Princess Royal" behind her back, a jab at her unprecedented power — and inexperience — in the administration.

The nickname was reportedly coined during the online backlash to a photo of the G-20 summit, which showed Trump briefly sitting in for her father. In the photo, the president's daughter was sitting at a table of world leaders, alongside Chinese President Xi Jinping, British Prime Minister Theresa May, Turkish President Recep Tayyip Erdoğan, and German Chancellor Angela Merkel.

Critics took care to point out the overt political nepotism bestowed on the president's daughter, but many also questioned Trump's qualifications to step in for her father. In response to the photo, the former first daughter Chelsea Clinton tweeted about the questionable optics of her power.

Good morning Mr. President. It would never have occurred to my mother or my father to ask me. Were you giving our country away? Hoping not.

The Vanity Fair report reveals that a former Trump adviser responded to the photo of the G-20 summit by stating, "Excuse me. This is not a royal family, and she's not the princess royal." It was reportedly after this backlash that White House aides started calling Ivanka "Princess Royal" behind her back.

Ivanka is far from alone in her ethically questionable role as an adviser in the White House. Her husband Jared Kushner also serves as an adviser to Trump and receives similar criticism both for being the president's son-in-law and being tasked with major issues like peace in the Middle East while tacitly politically inexperienced.

A Washington insider reportedly told Vanity Fair that while Jared and Ivanka have not fared well in setting boundaries, the president has made matters worse.

What is off-putting about them is they do not grasp their essential irrelevance. They think they are special. ... Trump is emotionally dependent on his son-in-law and his daughter. But they can't do anything for him. All they can do is make him feel better about what his life has come to.

While both Jared and Ivanka are reaping the power and benefits of proximity to the president, the criticisms hurled at them have not completely fallen on deaf ears. As reported in the Vanity Fair piece, an old New York friend of the couple said that D.C. "punctures their self-esteem on a daily basis."

More like this
Watch Jacinda Arden’s Devastatingly Honest Resignation Speech
By Sam Ramsden
What The UK Blocking Scotland’s Gender Recognition Bill Means
By Sam Ramsden
Man Meets Politics: ‘Boy Meets World’ Star Ben Savage Is Running For Congress
By Jake Viswanath
Eurovision Has Been Given A Whole New Look Ahead Of Its Liverpool Debut
By Bustle UK
Get Even More From Bustle — Sign Up For The Newsletter
From hair trends to relationship advice, our daily newsletter has everything you need to sound like a person who’s on TikTok, even if you aren’t.