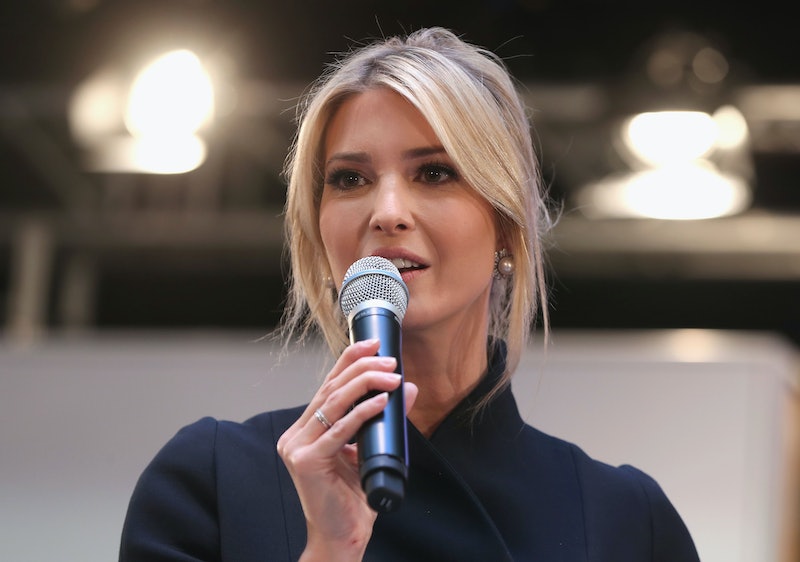 President Trump recently confirmed longstanding reports that he'd considered appointing his daughter Ivanka Trump to lead the World Bank, explaining to the Atlantic that she's "good with numbers." In an interview with the Associated Press Wednesday, Ivanka confirmed that the World Bank job was on the table — and revealed why she turned it down.

Trump told the Associated Press that her father brought up the possibility of appointing her to the World Bank as "a question," but that she told him she was "happy with the work" she was doing as a presidential adviser. Trump instead assisted the president with the selection process for the World Bank job; ultimately, Donald Trump nominated David Malpass, a U.S. treasury official and staunch supporter of the president himself, for the job in February.

Ivanka Trump is in the midst of a two-nation tour of Africa, Africa News reports. She spent two days in the capitol of Ethiopia, where she honored victims of the Ethiopian Airlines crash and promoted a USAID initiative to encourage women's workplace participation, the BBC reports. On Tuesday, she arrived in the Ivory Coast, where she met with government officials and met with women on a cocoa farm, according to Africa News.

"Ethiopia's success is Africa's success," Trump said during the first branch of her trip, according to CBS News. "We learned today that the quality of the coffee is second to none. You shared with me that Ethiopian cotton rivals cotton anywhere in the world. And then of course the skills and the craftsmanship of the Ethiopian people. We hope more people realize their full potential."

Trump told the Associated Press that she's been "deeply, deeply inspired" by her trip to the African continent, and that she believes her father "will be as well." Bustle has reached out to the White House for clarification on whether Donald has any plans to visit Africa; he has never done so as president, and hasn't announced any intention of doing so.

In an extensive profile of Trump published on Friday, the president told the Atlantic that he "thought of Ivanka for the World Bank," and that she would have done a good job leading the international financial institution because she's "very good at numbers." He went on to say that he'd also considered appointing her to a job at the United Nations, but recognized that doing so would have drawn accusations of nepotism.

"If I did, they'd say nepotism, when it would've had nothing to do with nepotism," Donald told the Atlantic. "But she would've been incredible." When asked by the Associated Press if her father had offered her any jobs other than World Bank chief, Trump said she'd "keep that between" her and the president.

In her interview with the Associated Press, Trump also knocked down the semi-regular reports that she plans to run for president herself after her father's time in the White House is finished. Although Trump didn't explicitly rule out the possibility, she told the Associated Press that she doesn't see herself running for political office in the future.