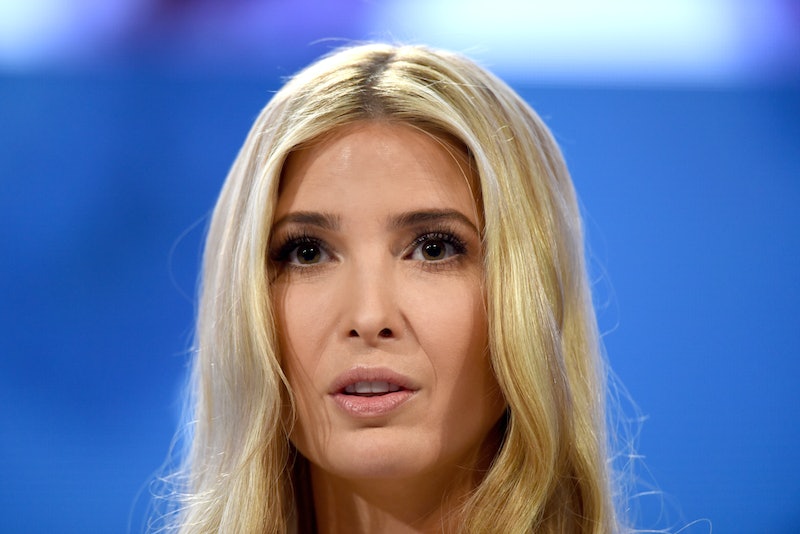 While the president of the United States is known for his outbursts on Twitter, his daughter — who also works as a White House adviser — appears to have a different approach: ignore her critics. Ivanka Trump told the audience at the Concordia Summit in New York on Monday morning that she didn't believe in paying any mind to critics. If anything, Ivanka said she ignored "the noise."

"Nothing prepares you for the intensity of the experience — nothing," the White House adviser said of her experience working for her father's administration. When it came to people who criticized her role in the Trump presidency, Ivanka said, "I tend not to respond. I tend not to debunk the criticism. I tend not to say when things are blatantly factually inaccurate. Because I view my experience here as such precious time."

The president's daughter said that people around her in the administration seemed heavily invested in responding to their critics. Although Trump did not mention her own father's Twitter rants, she said, "I have seen people —and they care so much — and then they start getting Google alerts and they go down the rabbit hole of caring what people think about them and it starts to take a little bit more of their time, a little bit more of their time."

The White House adviser's comments come shortly after celebrities on Saturday implored her to support Christine Blasey Ford, who accused SCOTUS nominee Brett Kavanaugh of sexual assault. (Kavanaugh has categorically denied the allegation). On Sunday evening, another woman, Deborah Ramirez, accused him of sexual assault — this time while they were at Yale. Kavanaugh has also denied Ramirez's allegation.

Kavanaugh has issued several statements against the allegations. In two statements denying Ford's accusation, he underscored his willingness to testify before the Senate Judiciary Committee after its chairman, Chuck Grassley, called on both Kavanaugh and Ford to a public hearing.

On Monday afternoon, Kavanaugh sent a letter to the committee chairs denying both allegations and calling them "smears."

In her Concordia comments, Ivanka noticeably left the controversy surrounding the SCOTUS nominee out. She told her audience in New York that she did not see the point or purpose of engaging in the "daily chaos" supposedly caused by critics. "Not only is it pointless," Ivanka said, "not only does it drain your energy, not only does it sometimes cause your internal compass to go awry but […] I find getting too sort of engaged in the daily chaos as distracting."

The alternative, she said, was based on an unnamed "friend's" advice. This unidentified person told Ivanka to maintain a "near myopic focus" on her profession as she works for her father. In this entire bit of recommending ignoring criticism, the White House advisor did not mention her father's infamous tweets at all.