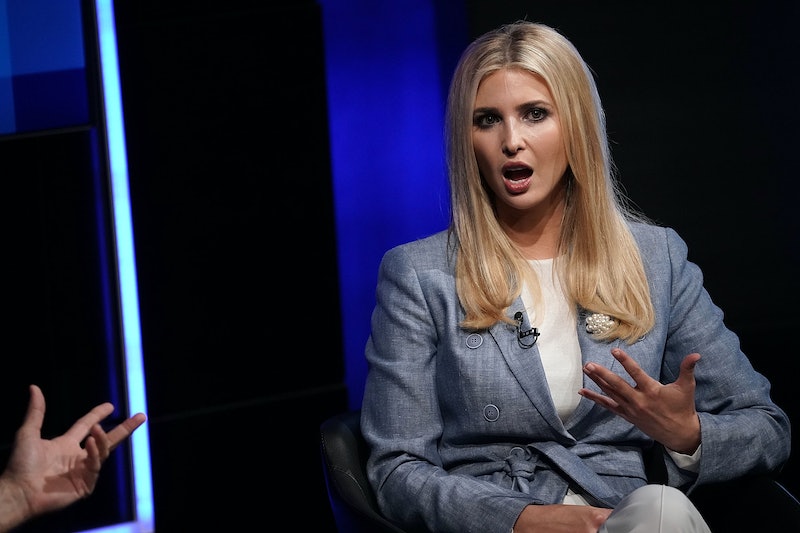 Before Donald Trump assumed the presidency, some people on the political left thought that maybe his eldest daughter Ivanka Trump would serve as a mitigating factor to some of his more hardline policies. But President Trump's actions, combined with his daughter's silence, have dashed this hope again and again. Most recently, women are pointing out Ivanka's silence on Brett Kavanaugh and Christine Blasey Ford, asking her to support the FBI investigation that Ford is calling for.

Ford accused Kavanaugh of attempting to rape her while the two were both in high school (an accusation that Kavanaugh flatly denied), first anonymously, and then publicly in an interview with The Washington Post. After that, Kavanaugh's confirmation to the Supreme Court got much more difficult than many in the White House initially assumed it would be, as Vanity Fair reported.

An unnamed source told Vanity Fair that Ivanka Trump even advised her father to “cut bait” and choose a different nominee, rather than continuing to defend Kavanaugh. Since then, the president has dug into his defense of Kavanaugh, even with a tweet questioning why Ford would have chosen not to report the alleged incident. Publicly, though, Ivanka hasn't said anything about Kavanaugh either way — and now women on social media are asking for the first daughter's support.

"Dear @IvankaTrump, you don't follow me on twitter. But as a public servant, you work for me," wrote actress and activist Alyssa Milano on Twitter. "You’ve proclaimed yourself a feminist. Use your access to demand that Professor Ford’s request for a full, fair, trauma-informed investigation by the FBI be held."

Numerous others have appealed to Trump using versions of the same statement, all connected with the hashtag #DearIvanka. Several female celebrities added their voices to the cause, including Cheryl Strayed, Chelsea Handler, and Amy Schumer. Schumer, who posted her note to Trump on Instagram, noted that the first daughter does actually follow her and added a cutting note to her as well.

"You will be remembered like Eva Braun unless you do something," Schumer wrote on Instagram, referring to Adolf Hitler's partner. "It’s not too late."

The #DearIvanka tweets are focused specifically on one very concrete step that Trump could take: urging the White House to order an FBI investigation, which Ford herself has asked for, as Refinery29 noted. The White House has the power to do that — and Trump is a senior adviser in the White House. And as some may remember, this isn't the first time that the #DearIvanka hashtag has spread across social media. Back in August, Refinery29 wrote that numerous celebrities whom Trump followed posted messages with it, begging her to do something to bring the separated migrant families back together.

If Trump has made any progress in that effort, though, the public has not heard about it. Perhaps there is still time for her to sell her father on the issue of Kavanaugh, but those who have followed her track record in the White House won't have much to be optimistic about. For example, her efforts to stop her father from pulling out of the Paris climate accords failed, as Politico reported, and she has repeatedly tweeted about supporting women's equality while her father's administration enforced policies doing the exact opposite, as Elle wrote. It's clear this round of #DearIvanka probably won't be the last.