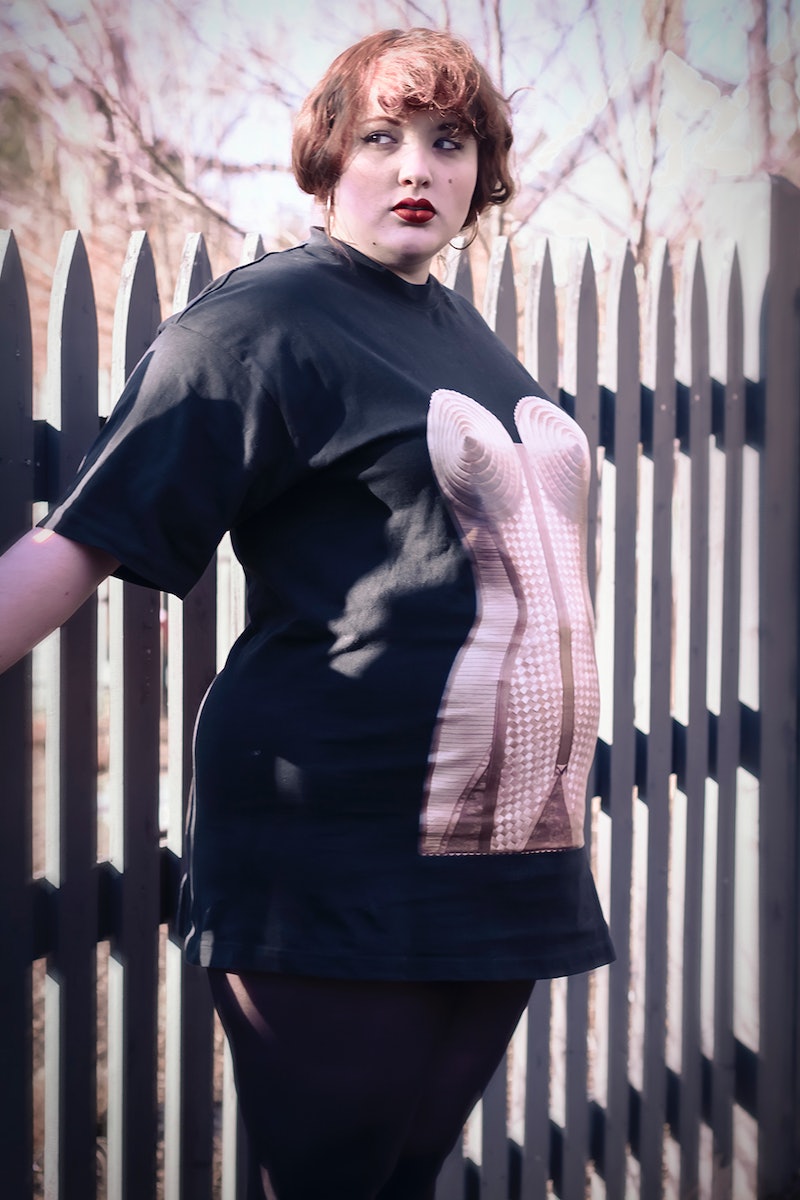 Hey you, my thin woman within. It's been a while, but don't worry. I have not forgotten your alleged existence. First let's establish who, exactly, you are. You're a figure I'd wager most people of size are acquainted with — even if they never wanted to be.

The idea of you is introduced the first time we see a weight loss commercial that features a former fat person holding up some very big pants. Two of their "new and improved" thin selves could fit into those pants. And this new self is said to be happier, healthier, and more superior than the former fatty who allegedly couldn't wear a crop top, or travel, or fuck.

You are a figure we're told to aspire to constantly, not only as a marketing tactic alongside diet propaganda, but through the sheer fact that we so rarely see people like us celebrated in the imagery we consume, or allowed to exist in peace without someone telling us how much cuter or fitter or more monetarily baller we'd be without the oversized muffin top. And when we learn that some of us might in fact be more successful if we were smaller thanks to the possible impacted earning potential of people of size, the blame is so regularly placed on us. If only we allowed you to come out, we wouldn't have to risk such injustice.

While our paths haven't crossed in some time, I still recall how you, like all thin people we are too often told are living not-so-quietly beneath the flesh of fat figures, had a penchant for waxing lyrical about the kind of life I could have if only I executed my chunky bits. Inside what was a 200-pound body and is now a nearly 300-pound one was supposedly you: My "better" 120-pound self. Once many, many pounds were shred, you would help me achieve the career, the relationships, the sex, and the exploration I so craved, but was taught to believe off limits to folks with more fat than a ribeye.

I imagine that, somewhere, you are enjoying your 300-calorie meal plan consisting principally of lemon juice-drenched kale leaves and those disco pants you swore I'd never find in my size. You are watching your weight loss yoga YouTube playlist, all the while thanking the body gods for sparing you of excess rolls, just like the kind I've always had.

Here's the thing, though. You — a fabricated narrative that tells us that our lives must be placed on hold until we look more like a Gossip Girl extra than a Biggest Loser contestant — well, you're kind of a lie.

I was about 10 years old the first time we met. There was a new girl in my class at school, and she had moved to our small New Jersey town from Staten Island, which granted her a heavy dose of cool points. Plus, she had the best goddamn Lisa Frank backpack any of us plebs had ever come across.

When I plucked up the courage to ask her over to my house to enjoy the blow-up pool in my backyard, she snickered with gusto. "I don't want fat friends," she practically shouted at me. "Maybe if you get skinnier."

It was not the first time I had been presented with the reality of my fatness. But it was the first time I recall weight loss being so bluntly framed as something that could help me achieve the things I wanted. If I "got skinnier" — if I let you come out, thin woman within — I could be friends with this rad purveyor of rainbow accessories.

With time, I came to believe that if I let you come out, I could have it all: Not only a rainbow accessory-clad BFF, but a cute boyfriend, a book deal, a modeling gig or two, extraordinary fashion, and perhaps the most important thing of all — acceptance and tolerance from others.

Now, I know some people genuinely want to be thin. I also know now that some people genuinely want to be fat. If you ask me, both desires should be allowed (although the former might deserve some critical thinking regarding its motivations). Calling out your toxic and imagined existence does not mean belittling thinness or thin human beings, girl. It just means questioning the myth that thinness is a cure-all to misery. If not every other ailment, physical or mental.

You tell us all about the things we "cannot" do until we lose the pounds, while your existence simultaneously contributes to the mass success of a diet industry that also thrives off of telling fat people how gross and uncouth they are. You make us believe that we are broken and ugly; unworthy and reprehensible.

But what is it you actually achieve? Aesthetic homogenization? A road we so willingly travel in aid of everyone looking very much the same? Um, that's pretty effing freaky, when you actually stop to think about it. And boring. And uncomfortable. And super invalidating to the fact that our differences and variations are part of what make humanity worth experiencing in the first place.

You may be wondering how it has come to this. I used to be one of your most loyal of subjects. I subscribed to all the Jazzercise's, I cut out all the carbs, I did all the exercise, I lost all the weight (only to gain it all back every time). I worshipped you. I believed in you. I was certain that you were the fat-free key to the life I saw people around me living.

So, thin Marie. You probably won't be happy to learn that today I woke up nestled next to my 120-pound partner. We fooled around a little before I got up, got dressed in a cute metallic slip dress, kissed my baby girl (who was born even though doctors have long been telling me that my weight would get in the way of conception), and I got out my laptop to do some work for a job I love: A job that values every pound of me.

Later today, I might go on a little walk around the hills outside. I'll take some snacks — any snacks of my choosing — and I'll daydream a little bit about that trip to Amsterdam I'm going to take when I save up enough money.

You probably won't be happy to learn that I did all that at just shy of 300 pounds, either.

More like this
Berriez Founder Emma Zack On Her Size Inclusive NYFW Show
By Dominique Norman
The Best Plus-Size Looks From New York Fashion Week
By Dominique Norman
The Velvet Nail Trend Brings Cozy Texture To Your Manis
By Jordan Murray
15 Chrome Nail Polish Colors For An Easy, Mirror-Like Manicure
By Audrey Noble
Get Even More From Bustle — Sign Up For The Newsletter