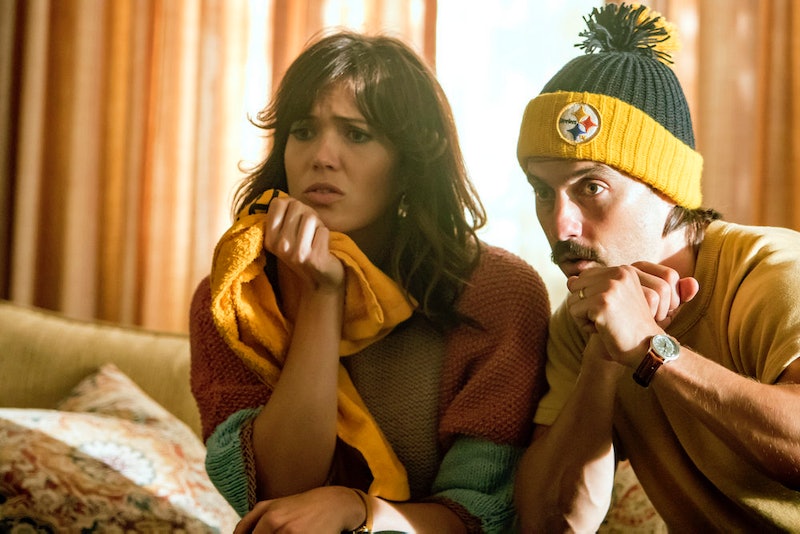 This Is Us fans have been cooking up theories about Jack's death since last season, and with the new episodes' heartbreaking and intriguing clues, the theories are just becoming more and more in-depth. Viewers know that a fire takes place that destroys the Pearson home — whether Jack is killed the night of the fire or from effects of the fire afterward remains to be seen — but one small detail about Jack and Kate's relationship could prove that the fire is what kills Jack on This is Us after all.

Fans know that Kate blames herself for Jack's death, but it's pretty clear that she wouldn't have ever done anything to intentionally harm her beloved father. So, it's likely that an unfortunate circumstance or accident links Kate to Jack's death — perhaps being in the wrong place at the wrong time, like in the house when it caught fire.

Fans also know that Kate insists upon watching every Pittsburgh Steelers game on TV with her dad's ashes beside her, but we haven't really seen young Kate show much enthusiasm for football in flashbacks — if that was a central part of her character all the way since childhood, it's likely that the showrunners might've laid a little more groundwork. Especially given the fact that Pittsburgh is such a football-fueled city and the Steelers have frequently popped up in passing in the show, it would've been an easy detail to include. Perhaps, then, Kate's football tradition was somewhat spurred by her father's death.

One clue that's been plainly laid out for viewers is the fact that Rebecca is wearing a Steelers jersey when she rolls up to the burnt home. She wore a jersey during a pivotal game in Season 1 as well, so this is an established game day habit for her. Is it possible, then, that Jack died on a day when the Steelers were playing? Maybe Jack and Kate were watching the game together before the fire broke out. Reddit user rblaske suggested that the family could have been watching the game before escaping the fire, and Jack ran back in to save the dog Kate was holding in a flashback in the season premiere. If the last memory Kate ever had of her father was of him watching his favorite football team, it'd be no surprise that she would start this tradition of watching the games with his ashes, and that she'd be so adamant about her ritual.

Reddit user darkjet204 has a similar theory — but instead thinks the family was watching the Steelers game elsewhere while Jack stayed back to renovate the home. It'd explain why nobody else was apparently harmed by the fire, why Rebecca was wearing the Steelers shirt, and perhaps could mean that Kate watches the games with Jack's ashes every week because she desperately wishes he had come to watch that game with them. That same user also notes that this would explain why Jack seemingly had his construction notebook with him (it was in the bag of his belongings that Rebecca was driving home with) and — if Kate was eager for the renovations to be done and asking Jack to speed them along — would explain why she blames herself.

It's something to think about, at the very least. If Jack didn't die the night of the fire, why would these Steelers details be peppered in? Why would it be significant for it to be game day the day of the fire if that isn't also the day Jack died? Rebecca has rarely been seen in Steelers clothing outside of storylines relating directly to the team playing, so the shirt is a questionable detail if it proves to be unrelated.

Whatever the true cause of Jack's death reveals itself to be, there's no doubt the fire is at the center of it. It's worth reiterating that showrunner Dan Fogelman said that the writers aren't messing with us. While many are theorizing that the burnt home is just a ruse to throw audiences off the scent of the real cause of death, Fogelman told Variety that the show is not going to pull an unrealistic stunt here. “They don’t know the details. Did he die in the fire? Did he get out of the fire? But we’re not misdirecting. He didn’t die four years later,” Fogelman says. We're on the right path, and if This Is Us has taught us anything, it's that no detail, however small, is an accident. So pay attention to those Steelers references, folks. You never know where they might lead.

More like this
The New Grey's Anatomy Interns Have Fans Feeling So Nostalgic For Season 1
By Brad Witter
Nicola Coughlan Shared A Lady Whistledown Excerpt From ‘Bridgerton’ Season 3
By Grace Wehniainen, Alyssa Lapid and Sam Ramsden
A New 'And Just Like That' Table Read Pic Confirms A Key Character's Return
By Jack Irvin and Grace Wehniainen
You’ll Definitely Recognise Both Of Ty Tennant’s Parents
By Maxine Harrison
Get Even More From Bustle — Sign Up For The Newsletter