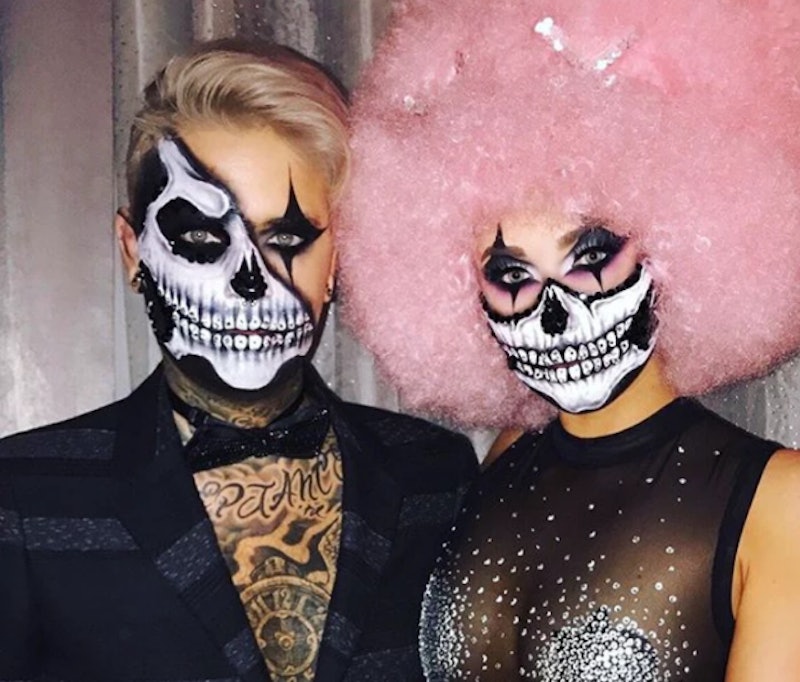 Another Halloween weekend, another case of cultural appropriation. This time, one of YouTube's favorite beauty vloggers was the perpetrator. Jaclyn Hill wore an afro on Halloween and her fans were not here for it. The woman who brought the beauty world the famous Becca Champagne Pop Highlighter dressed up as a glamorous skeleton for the weekend, which on paper is perfectly fine. She put on a bedazzled leotard, a frilly tutu, $6,000 sparkly boots (as one does), and painted on an expert skeleton mask. But the problem was that she decided to "accessorize" the whole costume with a cotton candy pink afro.

Bustle reached out to Hill for comment on her choice to wear an afro.

Here's the thing: One can argue that we're past the stage where saying "I didn't know" is a viable excuse for cultural appropriation. Even if you don't have any people of color in your friends circles, that's also no longer enough to be ignorant of the fact that "borrowing" hairstyles from black culture is appropriation. After all, the black community shouldn't have to educate white people on what is or is not offensive.

From white celebrities being called out for wearing cornrows to makeup artists coming under fire when they wear bindis in their makeup looks, information and critique on appropriation is readily available. At this point, to choose to wear something that steals from a marginalized community is simply disregarding the information out there on why cultural appropriation is hurtful and angering.

And this is why Twitter was not here for Hill's wig choice.

Some Twitter users spotted the photo above before Halloween, and predicted Hill would receive push back from fans for appropriation.

As one follower pointed out, the critique is warranted. After all, the onus is on Hill to educate herself on such issues, especially considering the fact that she has such a big platform. She has people of color who support her and use her products, and she should be aware of their struggles.

Wearing an afro is a big deal because the black community is systematically discriminated against when wearing natural hair — from the Army banning natural hairstyles in 2014 to studies showing POC have better chances of getting hired with Eurocentric locks. This inequality is in part why appropriating their hair is not an option for a costume.

It also seems like "willful ignorance" was a theme in critiques of Hill, with many bringing up a recent blunder where Hill allegedly posted a Snapchat of her white friend and fellow influencer dropping the N-word while playing a video game. Hill has also Snapped videos of her friends singing the N-word along to songs.

Many fans, however, came to Hill's defense on Twitter. These fans say Hill probably didn't mean any harm by the hairstyle and that it was all just for the fun of Halloween.

Unfortunately, though, that's not the way cultural appropriation works. Many people appropriate looks because they think they look creative or edgy or fun, but they take these looks out of the rich and meaningful context of culture in order to merely "play" with the style for a moment.

Cultural appropriation is often not done with malice, but it is done with insensitivity. Worse, a white wearer is often seen as edgy or trendy when they wear an appropriated look. But the marginalized look they took the look from remains discriminated against when they wear the same style.

It doesn't matter if it's a seemingly "harmless" borrow. It doesn't change the fact that our society has two different reactions to two different skin tones wearing one look.