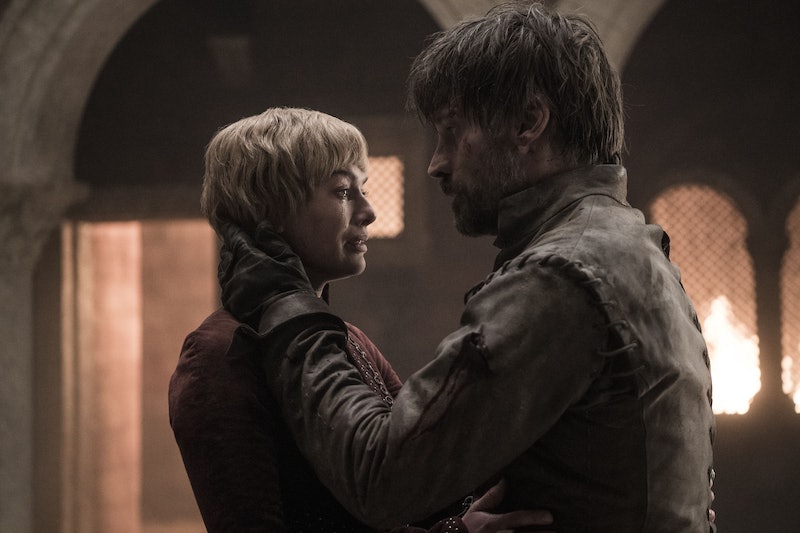 Spoilers for Game of Thrones Season 8 ahead. They were born together, loved each other, and now, it looks like the Lannister twins have died as they lived: side by side. Somewhat surprisingly, in "The Bells," Jaime and Cersei appeared to die in each others' arms on Game of Thrones, with the tragic events of the penultimate episode proving that their love for each other was ultimately their downfall.

Despite seeming as if his relationship with his twin sister was over for good early on this season, Jaime (Nikolaj Coster-Waldau) left Winterfell — and the arms of Brienne (Gwendoline Christie), after the pair finally slept together after seasons of buildup — in order to head back to King's Landing and reunite with Cersei (Lena Headey). With the help of Tyrion (Peter Dinklage), Jaime managed to escape the Unsullied and head over to the Red Keep in order to try and save Cersei from the destruction that Dany's dragons were causing, and escape with her and their unborn child. However, he wasn't the only one on his way to try and save Cersei: before he could make it to his sister, he had to fight Euron Greyjoy (Pilou Asbæk) on the shores of the castle.

Severely wounded from his fight with Euron — and bleeding heavily from the many stabbings he endured — Jaime finally met up with Cersei, though it quickly became clear that they would likely be unable to escape the castle as Drogon destroyed King's Landing. "I want our baby to live," Cersei pleaded with Jaime, sobbing as it became clear that the pair likely wouldn't survive. "Look at me," he responded, holding onto her tightly. "Nothing else matters. Just us." And with that, the walls of the Red Keep collapsed on top of them, seemingly killing them as they clung to each other.

When Jaime left Winterfell, he told Brienne that he and Cersei were more alike than the newly-knighted lady of Tarth could imagine, and his determination to ensure that his sister (and lover) didn't die alone seems to underline that point. Despite making steps towards redemption over the past few seasons, Jaime's actions in Season 8 prove that he was never truly able to let go of Cersei and the relationship that the two have had their entire lives.

It might be that he felt guilty for attempting to leave Cersei and his past behind; it could just be that he truly has never loved anyone the way he has loved her. Either way, leaving his new life in order to die by Cersei's side feels like a fittingly tragic end to a relationship that has caused so much destruction and pain over the events of the series.

In Episode 2 of Season 8, Jaime came face to face with Bran Stark (Isaac Hempstead-Wright) for the first time since he pushed him out of a tower window in the show's pilot. "The things we do for love," Bran said, echoing Jaime's own sentiments from that moment. While it seemed to be a way to let Jaime know that he hadn't forgotten what the former Kingslayer had done to him in the moment, it also seems to be an accurate description of Jaime's whole personality and drives.

Jaime loves Cersei and he always has, and from the very first episode of Game of Thrones, it was clear that he was willing to go to extreme lengths and commit all kinds of atrocities in the name of love. In a way, there is no other way for Jaime to have gone out than by making a rash, dangerous decision in order to be by the side of the woman he loves.

As heartbreaking as that moment may have been — especially in the wake of his relationship with Brienne — Jaime returning to Cersei's side to die brings his whole character arc full circle. The things he'll do for love, indeed.