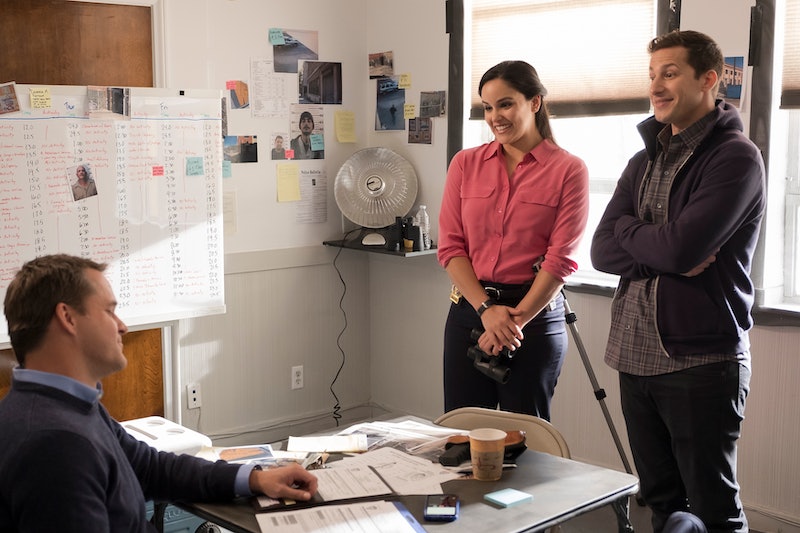 The midseason premiere of Brooklyn Nine-Nine actually opens up with some good news for our favorite funny crimefighters. Apparently, crime rates in Brooklyn are down. Yay! But the city is considering shutting down one of the borough's precincts, because less crime means you don't need as many cops around. Boo! Of course, I'm only saying that's a bad thing because that would mean the Nine-Nine would be broken up, and you can't possibly replicate the magic of this squad in any other way, shape, or form. What's worse is that by the end of the episode, I became just as worried about the fate of Jake and Amy's relationship on Brooklyn Nine-Nine as I am about the future of the precinct.

There are some investigations to be done to determine which precincts should stay open, so an auditor is brought in to see if the Nine-Nine makes the cut. As if this isn't bad enough, the auditor turns out to be none other than Amy's ex-boyfriend, Teddy. You know, the one she left for Jake because he was super boring? Well, Jake and Amy haven't forgotten about that, and neither has Teddy.

To make matters even worse, Teddy is assigned to follow them on a stakeout. But Jake and Amy are smart people, and they come up with a plan to butter Teddy up a bit by being really enthusiastic about all the lame stuff he's into, such as pilsner. They hope it will help the precinct.

Unfortunately, Teddy sees right through all of that. He tries to convince Jake and Amy that he's not boring anymore, thanks to his newfound hobbies of running 5Ks, vacationing in San Diego, doing adult coloring books, and — wait for it — jazz brunches. Of course, Jake and Amy still think Teddy is as dull as ever, which, let's face it, he totally is. Their comments are accidentally recorded on Teddy's phone while he's out of the room.

So Jake and Amy are forced to go boldly where they've never gone before: a jazz brunch. They stage a huge fight between themselves so that Jake can flip over the table with Teddy's phone on top of it to delete the recording.

The mission is a success, albeit an awkward one, and then something even more awkward happens. Teddy confesses that he's still in love with Amy — and right in front of his new girlfriend, mind you. Then he proposes to Amy, because he says they have the same interests and so much chemistry. Of course, Amy declines. She's in love with Jake, but what Teddy says about them being so different from one another does give them pause.

Teddy finally owns up to his boringness and recuses himself from the audit because of his past with Amy, who he proposes to one more time. But then the 99th Precinct is assigned someone even worse to conduct their audit, if you can believe it. Veronica Hopkins is the new auditor, and she used to date Terry, who she now hates. "I'm shutting the Nine-Nine down, and there's nothing you can do about it," Veronica whispers in Terry's ear at the end of the episode. And I'm so nervous, because it looks like she definitely means it.

With the potential closing of the 99th Precinct and a slight crack in Jake and Amy's relationship, there's almost too much to worry about on Brooklyn Nine-Nine. I have a feeling that the precinct won't be closing its doors forever, but now I'm not so sure that Jake and Amy will always be a thing. Sure, I love them as a couple. I actually think they're one of the few TV couples that hasn't lost their spark since that "will they or won't they" period ended. But this episode of Brooklyn Nine-Nine does underscore just how different Jake and Amy are from one another. I know they say opposites attract, but they don't say opposites live happily ever after.

Of course, Jake and Amy have faced threats to their relationship before, so this scenario isn't wholly unique. This could just be a one-off conflict as a source of tension for the episode, as similar plot lines have operated in the past. Or it could be the start of something much deeper. For the sake of my beloved Jake and Amy, I hope it's the former.

More like this
Here’s What Happens To Bill & Frank In 'The Last Of Us' Video Game
By Brad Witter
What Is Pamela Anderson’s Net Worth? She Was Never Paid For Her Stolen Sex Tape
By Hugh McIntyre
Linda Ronstadt’s “Long Long Time” Plays A Pivotal Role In The Last Of Us
By Brad Witter
Netflix Shut Down 'Bridgerton' S3 Rumours About A “Very Dark” Storyline
By Bustle
Get Even More From Bustle — Sign Up For The Newsletter
From hair trends to relationship advice, our daily newsletter has everything you need to sound like a person who’s on TikTok, even if you aren’t.