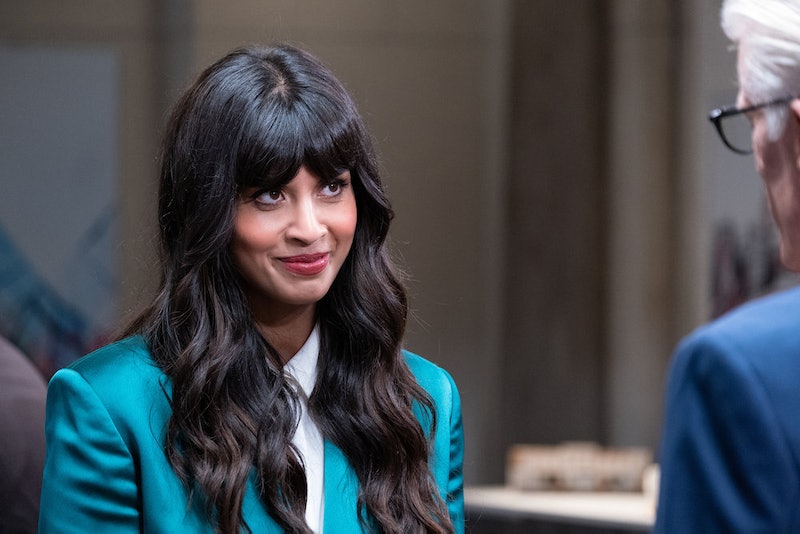 Dry your tears Team Cockroach, because in a new tweet, Jameela Jamil teased she wants a The Good Place spinoff centered on Tahani. OK, so she's probably joking, but she's also totally onto something here because — spoiler alert for The Good Place series finale — Tahani hasn't gone through the door to oblivion yet, and she just started a new job that would make for a fascinating workplace comedy. Also, Janet is still there, and she needs a less heartbreaking ending. This is a win-win situation, and if series creator Mike Schur would just make it, fans would no doubt watch the spinoff for at least 1,000 Jeremy Bearimys.

On Monday, Feb. 3, Jamil retweeted the clip of Michael giving Tahani his peacock bow tie to celebrate her becoming the first human architect of the afterlife. She captioned her tweet, "Tahani survives. Spin off you say...?" Um, yes, please.

Think about it. Tahani is surrounded by demons who spend their days devising ways to test the moral fortitude of humans, and her boss is Vicky. That's a recipe for all manner of comedy. Add in the fact that she's been tasked with creating Mindy St. Claire's test, and the spinoff almost writes itself.

Following Tahani as she navigates the next phase of her afterlife as an architect would be like watching Peggy kick butt in the male-dominated world of Mad Men. Only at the end of the day, she would kick back martinis with Janet instead of Don Draper. (And that's definitely an upgrade.)

Jamil isn't the only one who is excited by the idea of a Tahani spinoff. Fans are tweeting her about why her idea should become a reality. Twitter user @breathinsia commented, "SPIN OFF WITH JANET PLEASEEeeE," and @Lyca29 added, "I said as soon as the finale had finished there should be a spin off series about Tahani's adventures as an architect. Michael could even join her once he dies and goes through the system. Janet would also star, so would Shawn. Mindy could be there too."

As much fun as a Tahani spinoff would be, no one could fault Schur for not wanting to mess with perfection. The Good Place ended on a poignant, funny note that was in line with the brilliant comedy's central thesis that people are better when they're helping one another.

In a post-series finale interview with The Hollywood Reporter, Schur explained that his goal with The Good Place finale was for fans to walk away feeling satisfied. "This show has made a lot of arguments about various aspects of the human experience and about what matters and what doesn't, and about how we ought to live and behave," he said. "All of that stuff, if any of that stuff resonates, that's gravy. But my primary hope is that people who have been watching the show and like it feel like it's a good ending."

The Good Place's ending was everything it needed to be — but that doesn't mean a Tahani spinoff wouldn't be forking amazing anyway.

More like this
The 'Andor' Timeline, Explained
By Gretchen Smail
Nicola Coughlan Shared A Lady Whistledown Excerpt From ‘Bridgerton’ Season 3
By Grace Wehniainen, Alyssa Lapid and Sam Ramsden
Alicent's Green Dress In 'House Of The Dragon' May Be An Act Of War
By Kadin Burnett
Netflix Reveals First Look At Wednesday In The 'Addams Family' Spinoff Series
By Bustle Editors
Get Even More From Bustle — Sign Up For The Newsletter