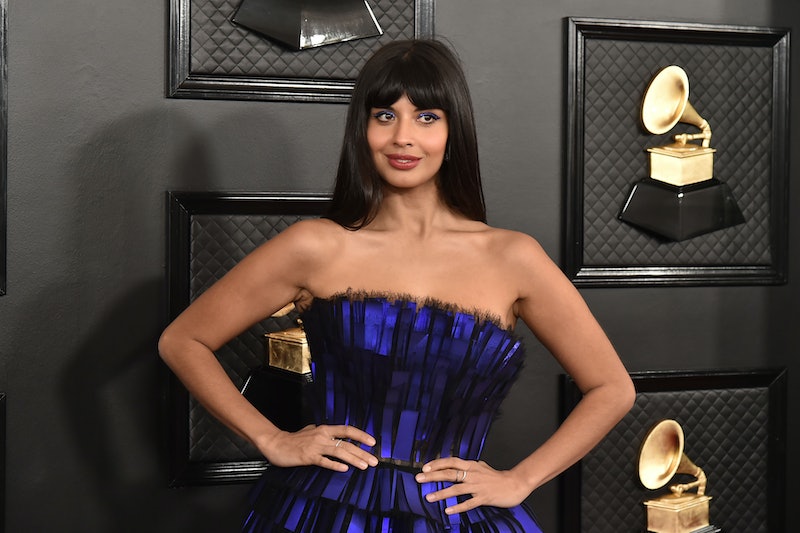 Right on the heels of The Good Place series finale, Jameela Jamil is facing backlash over her role in Legendary, HBO Max's upcoming voguing competition series. On Tuesday, Feb. 4, the streaming service announced that The Good Place star had been tapped to serve as both a judge and emcee for ballroom series. And the decision was instantly met with a great deal of criticism.

Many began speaking out over Jamil's role on the show, criticizing the streamer's decision to cast her as emcee. However, Jamil wasted little time in taking to Twitter to clarify the ordeal, claiming that the news was misreported and that she'll only be serving a judge, not a master of ceremonies, despite the press release obtained by Bustle referring to her as the show's "MC and judge." Per the release, Jamill will be working alongside Megan Thee Stallion, Law Roach, and Leiomy Maldonado, who will serve as additional judges on the panel. HBO Max released a statement to Variety late Wednesday night, clarifying her role. "Dashaun is the series' MC/Commentator, and Jameela heads up the panel of judges," the statement read in part.

As per the press release, the series is meant to highlight "modern day ball culture" and will feature "divas battle on teams called 'Houses' in fashion and dance challenges including vogueing for the chance to snatch the legendary trophy and win a cash prize." There will be eight voguing houses total, each consisting of five performers and a "house parent."

"Hello! @DEADLINE says I am the MC of this show! I am NOT," Jamil tweeted in response to the outlet's report about the show. "I am just one of the judges. The brilliant @DashaunWesley is. With help from the fabulous @TheOnlyMikeQ," she continued. "I'm a longtime fan of ballroom and just wanted to help this show get made to celebrate this beautiful community." She proceeded to post several follow-up tweets, claiming that the press release was incorrect, and insisting that she will not be taking part in the hosting portion of events in any way, shape, or form.

Jamil also made a point of responding to a tweet from HBO Max announcing the show about the announcement, asking them to take the tweet down and correct the mistake. "I’m not the MC! please take this down and correctly credit @DashaunWesley as MC with @TheOnlyMikeQ," she responded. (The HBO Max tweet has since been removed.)

Jamil's new co-workers have since backed her up. Dashaun Wesley, who is only listed as being a "commentator" in the press release, seemingly defended her on Twitter, tagging the actor and writing, "welcome to the team."

Shortly after the news initially broke, Trace Lysette took to her social media account to share her own thoughts on the matter and revealed that she herself had auditioned for the part. "As the mother of a house for nearly a decade it's kind of [mind] blowing when ppl with no connection to our culture gets the gig," Lysette tweeted. Though she added she holds no ill will towards Jamil. "This is not shade towards Jameela, I love all that she stands for. If anything I question the decision makers."

Jamil has since responded to Lysette's tweet, once again trying to clear up any miscommunication. "Hey trace. I think you auditioned to be one of the house mothers. I'm just one of the judges," Jamil replied. "Not a house mother. We weren't up for the same thing."

Despite all the controversy, Jamil remains excited about her new project. "I'm so excited for you to meet the contestants from best houses from the ballroom world, their extraordinary stories, talent, grace, humor and beauty," she tweeted.

Editor's note: This article has been updated with a statement from HBO Max.

More like this
Jinkx Monsoon Is About To Get Real Sketchy
By Sam Ramsden
'Heartstopper’s Kit Connor Quits Twitter Amid “Queerbaiting” Accusations
By Sam Ramsden
Pro Footballer Zander Murray Is "Blown Away" By Support After Coming Out
By Sam Ramsden
Bimini, Tia Kofi & More React To Cherry Valentine’s Death
By Catharina Cheung
Get Even More From Bustle — Sign Up For The Newsletter

This article was originally published on Feb. 5, 2020