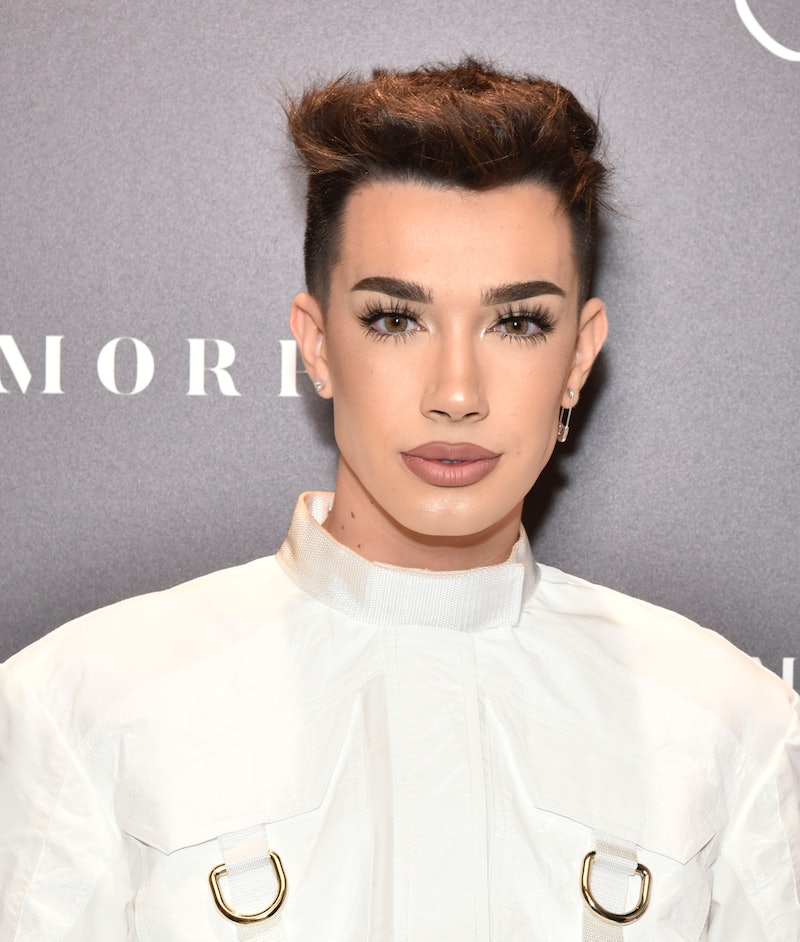 As you may have heard, Kylie Jenner celebrated the launch of her skincare line, Kylie Skin, on Tuesday, May 21 with a bevy of celebrity guests. One of those guests just so happened to be James Charles, who posed for a photo with Kylie Jenner, as BuzzFeed reported. In addition to posting the snap a day later, Charles also took to the comments section of his Instagram to clear up one misconception about his friendship with the Keeping Up With the Kardashians star — and his recent YouTube drama as a whole.

On Wednesday, May 22, Charles posted a photo of himself and Jenner from the Kylie Skin celebration, simply writing, "sisters" (which is the YouTuber's catchphrase). Given all of the Tati Westbrook-related drama lately, and the reports that the Life of Kylie was among the list of celebrities who had unfollowed him as a result, many Instagram users questioned why he posted a photo with the reality star if she didn't follow him.

One person wrote on Instagram, "but she unfollowed you lol," to which the social media star replied with some clarification of his own. He responded:

"she never followed in the first place lol stop believing everything you read on the internet."

That pretty much clears it all up. Contrary to what some may believe, there isn't any bad blood between Charles and Jenner. In fact, the pair has been friends for some time. Not only have they posed for snaps together, but the reality star was featured in a video on his YouTube channel back in October 2018 during which they naturally talked about all things makeup. So, it doesn't look like any YouTube drama will be able to separate that bond.

Just as a reminder, this whole situation began when Westbrook, a fellow YouTuber, posted a video on May 10 accusing Charles of promoting a vitamin brand, SugarBear Hair, that rivals her own. She also claimed he behaved inappropriately with a male waiter at a group dinner. (Charles later refuted the latter claim.) Following the release of her video, it was reported that many people, including Jenner, unfollowed Charles on social media. Of course, as he recently clarified, the KUWTK star was not even following him in the first place.

On May 10, Charles responded to Westbrook's video by posting his own in which he apologized to his former mentor and her husband, saying:

"I hate knowing that I disappointed, not only them [the fans], but most importantly two people that have been role models to me. I wish I could say this is the last time that I'd make a mistake, but it won't be. I know that I'll disappoint people as I continue to learn and grow every single day. I have a lot more to go, but that's OK."

Charles also responded with another video on May 18 in which he clarified why he promoted SugarBear Hair and that his interactions with the waiter were consensual.

As Seventeen reported, Westbrook once again took to her channel with another video on May 16, in which she called for the hate against Charles to stop and admitted the entire matter has gotten way out of hand. As of right now, following all of this back-and-forth YouTube drama, it's unclear where the two stand today in terms of their friendship.

But one thing is clear — as Charles clarified in his latest Instagram post, he and Jenner are still totally "sisters."