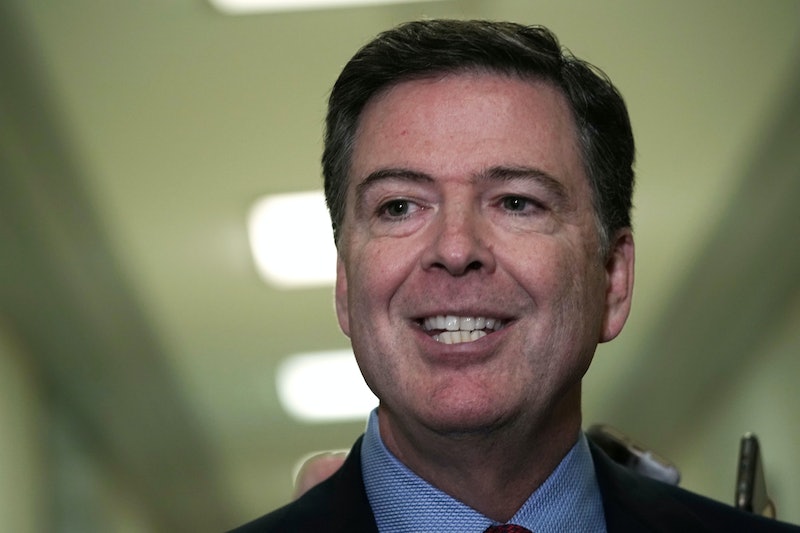 On Monday, April 1, former FBI Director James Comey tweeted an April Fools' joke that pretty much no one seemed to believe from the get go. He announced his alleged 2020 presidential candidacy by saying, "I’m in. We need someone in the middle. #2020" Though he might not have fooled very many people, some people on Twitter were worked up regardless.

Comey tweeted the message early on Monday morning, joining in on the timeless April 1 tradition. He included a picture to his tweet, which showed a classic presidential pose: his silhouette standing in the middle of a road, staring off into the distance. In a follow-up tweet, Comey wrote, "But could you imagine a president who used this website to make dad jokes rather than to hurl insults? Happy #AprilFools. #VoteDem2020"

By Monday evening, Comey's tweet had been favorited over 14,000 times, and commented on by about half as much. And within those 7,000-plus comments, there was a whole bag of mixed reactions — none of which seemed to reflect a general curiosity over whether Comey was actually running.

Comedian Kathy Griffin had a much harsher response, writing,

Are you personally willing to pull a Daniel Ellsberg? Thought so, gurrrl. Stop being a self indulgent, ineffective civilian and shut it. Amateur photo shoots with your stupid messages? Really? You’ve actually dumbed down Twitter. Congratulations.

Writer and director Zack Bornstein wrote, "lol it's funny because you installed Donald Trump by doing your job improperly"

BuzzFeed reporter Matthew Zeitlin summarized the whole situation in his tweet: "the james comey tweet is good purely because so many people are mad at it"

To be fair, it's possible that plenty of people fell for Comey's "humorous" trap. After all, the number of Democratic candidates running for president is so large for the 2020 campaign cycle that it seems believable that any Democratic politician might run, at this point.

Erick Fernandez, a journalist, seemed to capture the conflict that many people had, where they were pretty certain Comey wasn't actually running, but still felt the need to give the joke their attention. Fernandez wrote in a pair of tweets,

Yo this dude is exhausting... Like, even though this is 99% an April Fools joke, I just got mentally tired reading that tweet.

According to USA Today, Comey let his initial tweet announcing his candidacy hang out there in the Twitterverse for a full hour before adding his second tweet to confirm he was just joking around. In the world of Twitter, that's the equivalent of several weeks. Of course, if anyone did truly believe him, they might not let you know at this point — after all, there's nothing more annoying than planning to not be gullible on April Fool's day, then getting caught anyways.