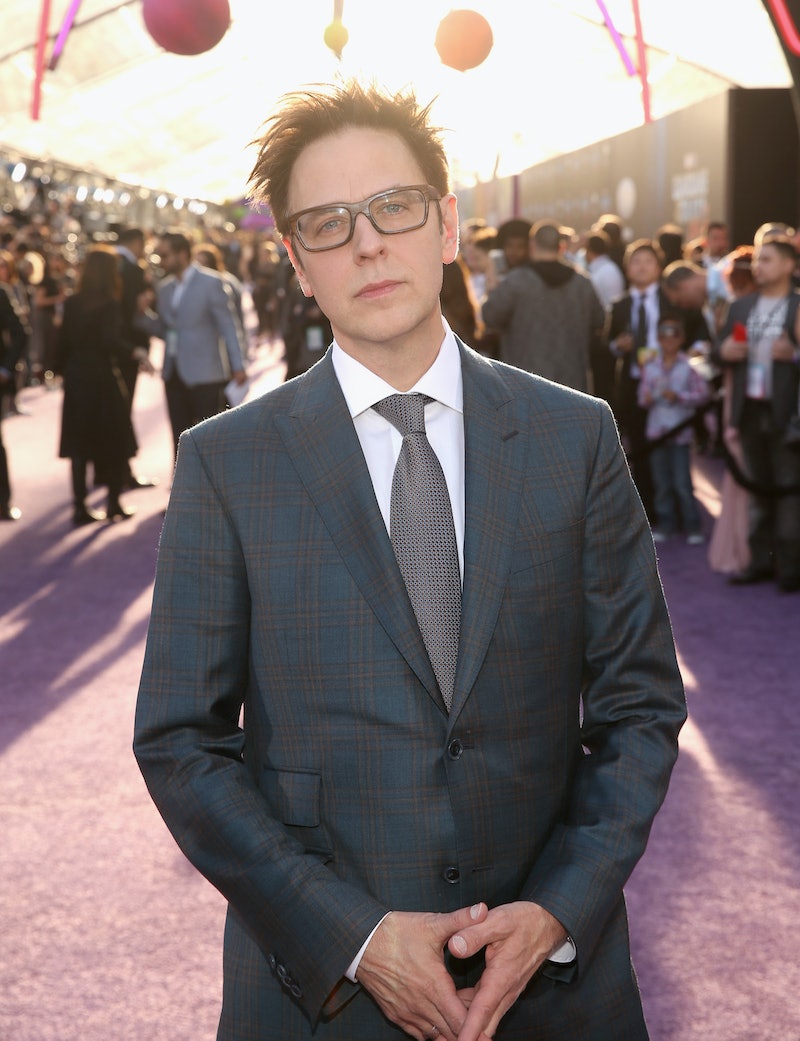 James Gunn and Disney have had a rollercoaster relationship, to say the least. Last year, the director planned to return to Disney and Marvel Studios to helm Guardians of the Galaxy Vol. 3 until he got fired after offensive tweets from a decade ago resurfaced, and then was rehired in March 2019. Now, he’s speaking out about the debacle. James Gunn finally addressed Disney's firing him from Guardians 3 in an interview with Deadline published on Wednesday, May 15, admitting that the studio had the right to fire him.

Gunn was fired from Guardians 3 on July 20, 2018, after old tweets, some dating back a decade, in which he made insensitive jokes about pedophilia and rape resurfaced. "The offensive attitudes and statements discovered on James' Twitter feed are indefensible and inconsistent with our studio's values, and we have severed our business relationship with him," Walt Disney Studios chairman Alan Horn said in a statement at the time, according to The Hollywood Reporter.

Gunn, who wrote and directed the first two Guardians of the Galaxy films, issued a public apology on the day of his firing. "Regardless of how much time has passed, I understand and accept the business decisions taken today. Even these many years later, I take full responsibility for the way I conducted myself," he wrote in a statement obtained by Bustle. "All I can do now, beyond offering my sincere and heartfelt regret, is to be the best human being I can be: accepting, understanding, committed to equality, and far more thoughtful about my public statements and my obligations to our public discourse."

In March 2019, it was announced that Gunn had been reinstated as writer-director of Guardians 3. Disney was reportedly persuaded to re-hire him after seeing how he had handled the public scandal and meeting with him on multiple occasions, according to Deadline. Though, it should also be noted that they reportedly did not speak with any other directors for the job.

In his recent interview with Deadline, Gunn again stressed that he was to blame for his old tweets, saying, "I don’t blame anyone." He echoed his original statement, expressing his regret for his attempted "jokes," adding, "I know that people have been hurt by things that I’ve said, and that’s still my responsibility, that I wasn’t as compassionate as I should be in what I say. I feel bad for that and take full responsibility."

And, in a somewhat surprising, but gracious turn, the director insisted that his firing was justified. "Disney totally had the right to fire me. This wasn’t a free speech issue," he said, referencing the free speech debate inspired by his firing, in which some believed that it was tantamount to censorship. "I said something they didn’t like and they completely had the right to fire me. There was never any argument of that," he stated.

Gunn also opened up about how he dealt with the backlash, saying that he had to learn how to forgive himself in order to get his career back on track. "The truth is I had a lot of anger at myself and I really had to try to put that aside," he said. "I had to realize what I needed to do differently in my life. That was a part of all of this. But in the same way I needed to not be lashing out at whoever fired me, or whoever spread links online, or cut up pictures to look like this or that, I also had to let go of some of that rage towards myself as well. Otherwise I just wasn’t going to be able to make it through."

Overall, the director now seems to think of his firing as a valuable learning experience. "A part of that day was the worst of my life, and a part of it was the greatest day of my life. I certainly haven’t been perfect in my spiritual journeys since that time, but I have been better."

Many fans of the Marvel Cinematic Universe are certainly happy to have Gunn return for Guardians of the Galaxy vol. 3, and, who knows, perhaps the film will be the better for all these ups and downs.