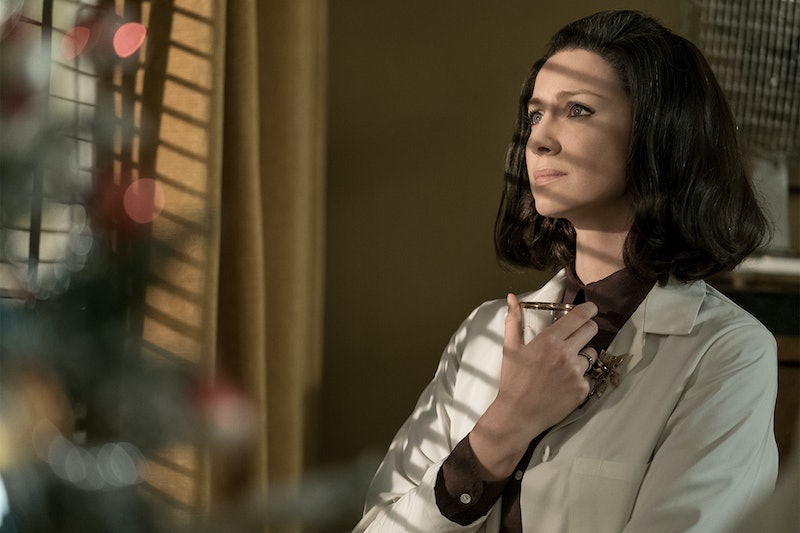 Spoiler warning! The Droughtlander between seasons officially ended when Season 3 premiered, but "Fire & Whiskey" marks the real return of Outlander since Jamie and Claire reunite. The last time viewers saw this pair together was in the Season 2 finale right before they tragically separated in order to save their unborn child before the Battle of Culloden. That was 1746 and it took Claire until 1968 in her time to figure out that Jamie is not only still alive 200 years in the past, but where exactly he is living. And though over 20 years have passed since they've last seen each other, fans can anticipate that Claire and Jamie on Outlander will be as connected as ever now that they are back together — well, as soon as Jamie wakes up.

While Claire had abandoned her search for Jamie in the previous episode, "Of Lost Things," Roger hadn't given up. So when he shows up unannounced on Claire and Brianna's doorstep, he has some significant news for Claire beyond just wanting an American Christmas with Brianna. Roger found an article from 1765 that quotes Scottish poet Robert Burns. Because Claire had previously revealed to Roger that she used to quote that Burns line to Jamie, and the poet was only 6 years old at the time that the article was published, Roger figures out that it must be Jamie who wrote the article. His theory is further proven by the fact that the name on the article is A. Malcolm. As Jamie's full name is James Alexander Malcolm MacKenzie Fraser, Roger is right to think that he found Jamie in the past.

However, Claire is resistant to pursue this new lead for a number of reasons. She doesn't want to leave Brianna when they finally have started being open to one another. Yet, Brianna graciously encourages Claire to go find the love of her life. It's a bittersweet moment for this mother and daughter and as most of their time onscreen together has been fraught with things unsaid, it's a heartwarming change of pace.

Another reason Claire is apprehensive about going back to the past is she's worried that Jamie won't love her anymore and won't find her attractive. If this were any other show, I'd say that's a fair concern, but the passion that Claire and Jamie have for one another is the hallmark of the series. But even without Claire knowing that, Brianna also helps her mom take a leap of faith to believe that Jamie will feel the same way as before.

As for what will happen when Jamie comes to — well, fans will have to wait more than a week for that since the next episode, "A. Malcolm," doesn't premiere until Oct. 22. While Jamie surely still loves Claire, he never expected her to return, as he proves by fainting upon seeing her. Just like things have changed for Claire over the course of 22 years, so have they changed for Jamie — perhaps even more drastically.

In their time apart, Claire became a doctor, which is a significant accomplishment, but she was very much stuck in the past and never allowed herself to really move on from Jamie — even when she thought he was dead. Jamie was still holding onto his time with Claire too, but had less control and knowledge over the situation since Claire left his life as mysteriously as she entered it. He doesn't know that Claire has been looking for him in the past and his life has changed — for instance, now he has a career as a printer in Edinburgh. While it would be pretty shocking that he'd be in love with someone else (nor will I choose to believe that's a possibility), he could be sleeping with someone or married to someone due to circumstances beyond his control since that's the kind of the thing that happens to him, as evidenced by the existence of his son Willie.

Still, even if you aren't a book reader and don't know what will happen, Jamie and Claire reuniting should make your heart soar just because their love has managed to do the unthinkable yet again. And what an unthinkable waste it would be if Jamie didn't want to be with Claire. So while you'll have to wait an extra week to see how Jamie feels about Claire, like Brianna told her mom, "You told me what you felt for Jamie was the most powerful thing you ever felt in your life. You have to trust it's the same for him." So trust that powerful feeling, Outlander fans, and have faith that Claire and Jamie's reunion will come with a big, romantic payoff.