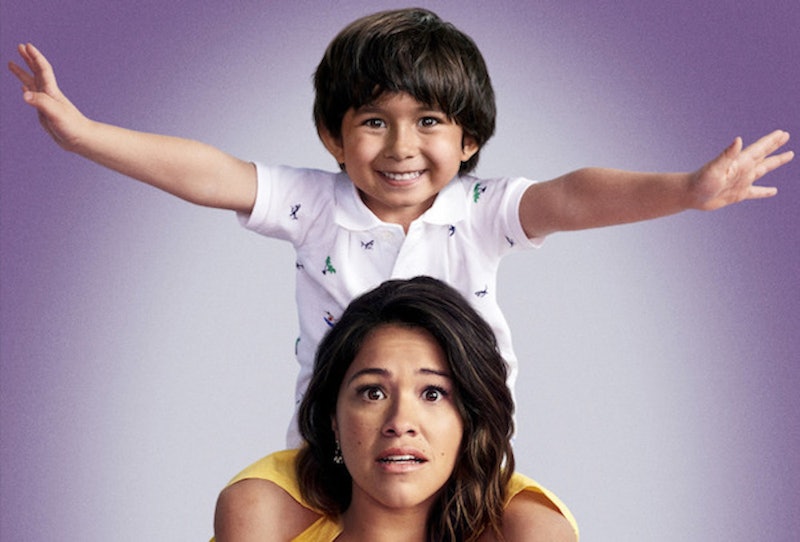 Since The CW show's first season, Jane the Virgin has portrayed the realities of modern-day motherhood. In between its telenovela-inspired elements and unexpected plot twists, the artificially-inseminated titular protagonist has shown — warts and all — what it's like to get pregnant unexpectedly and raise a child, all while balancing a career and relationship. In the Oct. 19 episode of the series, the relatability factor is kicked up a notch when Jane is forced to balance her 20-something wild side and new "situationship" with Adam with her responsibilities as a mother to Mateo.

TV shows are often quick to glamorize the experience of being a mom or to gloss over the situations they face in ways that don't feel familiar or authentic to real women. But with Jane The Virgin, other young mothers get to see a character who's balancing school pickups, a blooming writing career, co-parenting, and endless sleepless nights. While it's clear that Jane loves being a mom and has plenty of help from Rafael, Xiomara, Alba and Rogelio, the show doesn't sugarcoat it — living up to the title of "mom" can still be difficult for millennial mothers.

According to an analysis of new US Census Bureau data, roughly one in five moms is a millennial. Thanks to technology, pop-culture, and a general shift in societal attitudes, being a parent looks different today than it did before. While many of these moms are successfully pursuing careers, they're constantly encountering parenting problems that their own moms and dads never experienced. Even without the constraints of traditional career paths, social media and strong case of FOMO are creating challenges that only this generation of moms can relate to. Just ask Jane.

Adam, the youthful counterpart to Jane's type-A planner persona, represents the life Jane longs to have occasionally. He has roommates, he's at a different point in his career, and he can stay up late playing beer pong with friends guilt-free, unlike Jane. Part of his character's purpose is to remind Jane that she’s only 28-years-old and she still has a lot of youth left in her. But, that concept can sometimes be hard for women like Jane to grasp.

Women are receiving messages from an early age that they should be providers and nurturers, and basically give all of themselves to their children. And letting go and having fun isn't always the easiest thing to do when those faulty ideas linger. Jane is reminded of this constantly throughout the episode, as the two sides of her personalities — "fun Jane" and "mom Jane" — fight for attention in her head. Jane believes that excelling in one area of life, whether it be career, motherhood or love, means you're failing in the other two.

For example, when Jane does decide to have fun with Adam and play "roof ball" one night, things are going well until he dares her to jump off one of the lower roof sides. In true dramatic TV fashion, Jane completely misses his arms and instead slams into the concrete, fracturing her leg. Unable to walk and sporting a new cast, she falls asleep on Adam's couch only to wake up the next morning and discover that she's missed an important meeting at a potential new school for Mateo.

If Jane wants to date and have another relationship, that's bound to take up some of her time. How does she juggle that? How soon is too soon for Mateo to meet another man? Jane wonders if keeping Mateo from meeting Adam would prevent the relationship from getting too serious, too soon. In Jane's defense, the love of her life didn't die that long ago; she currently lives with her ex/baby's father; and she's unsure if Adam is ready to give up his carefree ways to be a part of her life longterm.

For young mothers like, there's no one cookie-cutter way to deal with any of these situations that may arise while trying to stay social and active. But, what can make the long journey more bearable is having someone like Jane there letting moms know that they're not alone in juggling their social and family lives.

More like this
The Best 'Grey's Anatomy' Intern Moments, From MAGIC to Glasses
By Grace Wehniainen
24 Years Ago, 'Friends' Dropped Its Most Underrated Ross & Rachel Episode
By Grace Wehniainen
Netflix Reveals First Look At Wednesday In The 'Addams Family' Spinoff Series
By Bustle Editors
Paul Mescal, Man Of Mystery
By Samantha Leach and Heather Hazzan
Get Even More From Bustle — Sign Up For The Newsletter