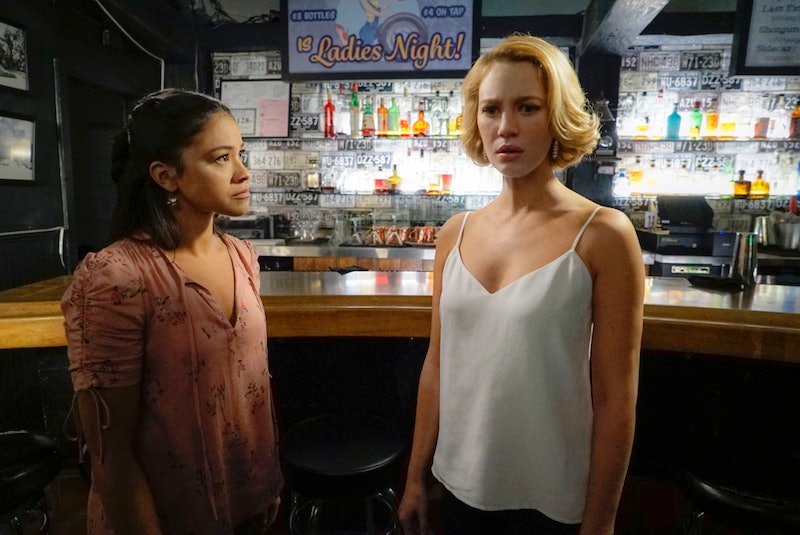 Jane and Petra admitted they loved one another in Season 4. But just because you love someone like family doesn't mean you like them as a friend. After all, as Petra has admitted herself, she doesn't really have many friends. Yet, these women have gone from romantic rivals and reluctantly sharing a baby daddy to being as close as sisters. So Jane is hurt when she starts getting the cold shoulder from Petra. It's pretty clear that Petra is upset that Jane didn't heed her advice and send Michael away, but with so much going on, Jane is oblivious to the fact and just wants to know why her friend is being so mean to her.

While Petra has every right to protect Rafael's privacy in some respects, her anger at Jane wasn't strictly about that. Instead, as she confesses at the lesbian club the Truck Shop, it's about how Petra doesn't understand why Jane didn't take her advice on Rafael and Michael. Further complicating matters is that their families are so intertwined. So Petra doesn't appreciate that Jane's extremely valid decision to see if she still loves the husband she thought had died is messing with their day-to-day dynamic.

But this is when Jane drops some knowledge that Petra really needs to hear. "Lord knows I don't understand all the choices that you make, but I still support you because that's what friends do," Jane tells her. "And so if you're serious about being my friend, you need to get over yourself and support me." Jane's words clearly make an impact, but Petra immediately takes advantage of the situation by having Jane support her on the dance floor to impress JR's friends. This moment works to not only show how they are real friends since they can put aside their differences in the face of a good time, but it also was a cheeky (butt pun totally intended) nod to the Jane and Petra 'shippers out there. Kiss already!

Jane has always been the more patient and understanding friend as Petra evolved from complicated villain to complicated hero on Jane the Virgin. And Petra has made a ton of misguided or outright bad decisions that Jane couldn't possibly understand — like when she artificially inseminated herself with Rafael's sperm or lied about Scott and Anezka's deaths. While Jane doesn't know every single wrongdoing that Petra has done, she is aware that their morals don't align perfectly. But as long as Petra isn't doing anything to intentionally hurt someone, Jane tries to support her even when they disagree. Just like she does by helping Petra have fun on the dance floor at the club.

Petra does apologize to Jane after their second-place victory at the Truck Shop. "Listen, I'm sorry. You're right. Friends support, so whatever happens with Michael, I'm here," she says to a relieved Jane. Because while Jane will always have her family to confide in, it's good to have a friend to be able to consult with too. And with Jane's decision to go with Michael to Montana, she can go with the confidence that her pal Petra will stand by her now and for the rest of the series.

More like this
Kaley Cuoco Was Set Up With Her New Boyfriend Tom Pelphrey By Her Manager
By Hugh McIntyre and Jake Viswanath
This House of the Dragon Character Will Create Another Scandal For Rhaenyra
By Kadin Burnett
Nicola Coughlan Shared A Lady Whistledown Excerpt From ‘Bridgerton’ Season 3
By Grace Wehniainen, Alyssa Lapid and Sam Ramsden
Devi Is Going To Meet A “Smoldering Bad Boy” In ‘Never Have I Ever’ Season 4
By Jack Irvin and Gabrielle Bondi
Get Even More From Bustle — Sign Up For The Newsletter