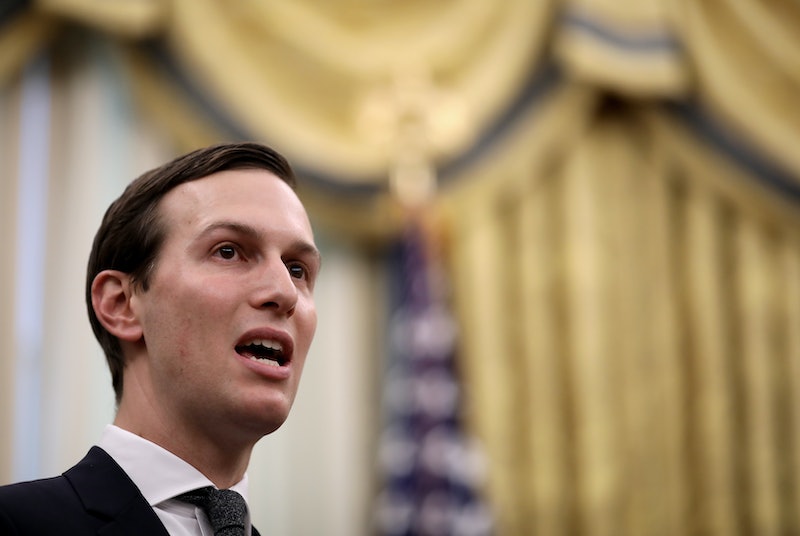 During the 2016 campaign, Donald Trump claimed that he would surround himself with "the best people" if elected. But recent reports claim that career security officials had concerns about giving security clearances to dozens of people in the Trump administration — including the president's own son-in-law. Jared Kushner responded to allegations about his security clearance in an interview with Fox News on Monday, and his response sounded very similar to statements made by President Trump himself.

“Over the last two years that I’ve been here, I’ve been accused of all different types of things and all of those things turned out to be false. We’ve had a lot of crazy accusations, like that we colluded with Russia," Kushner told Fox's Laura Ingraham.

While Kushner's statement grouped the claims that the White House bypassed the concerns of career security officials along with what he refers to as other "crazy accusations" that critics have made against the administration, he didn't explicitly deny the claims.

"Do you pose a grave national security concern to the country, Jared Kushner?" Ingraham asked him flat out.

"Look, I can say that in the White House, I work with some phenomenal people, and I think over the last two years, the president's done a phenomenal job of identifying what are our national security priorities," Kushner responded. "I hope I've played a good part in pushing those objectives forward."

While concerns about Kushner's security clearance have lingered for most of his father-in-law's presidency, things came to a head in late February, when The New York Times reported that Trump had ordered top security clearance be given to Kushner despite protests from the White House officials in charge of granting clearances. Trump has since denied this.

On Monday, the chairman of the House Committee on Oversight and Reform, Elijah Cummings (D-Maryland), released a memo about an interview with Tricia Newbold, a White House security official. Newbold blew the whistle on the fact that members of the Trump administration allegedly insisted that 25 individuals receive security clearances. She said her office had found "disqualifying issues" during all of their background checks, as The New York Times reported.

The memo didn't name any of the 25 people, but previous reports suggest that Kushner could have been one of them. In addition to The Times' reporting that Trump had personally intervened on Kushner's behalf, NBC News also reported in January that two White House security officials had denied Kushner's application for clearance because of concerns about the potential for foreign influence, before a political appointee and supervisor stepped in to confirm Kushner.

In his response to Ingraham, though, Kushner said he followed the rules and guidelines while applying for — and receiving — his top security clearances.

“When I came to Washington, I had a very successful business career," he told Ingraham. "I had extensive holdings. I disclosed all my holdings to the Office of Government Ethics… They told me what to divest, what to keep, what rules to follow.”