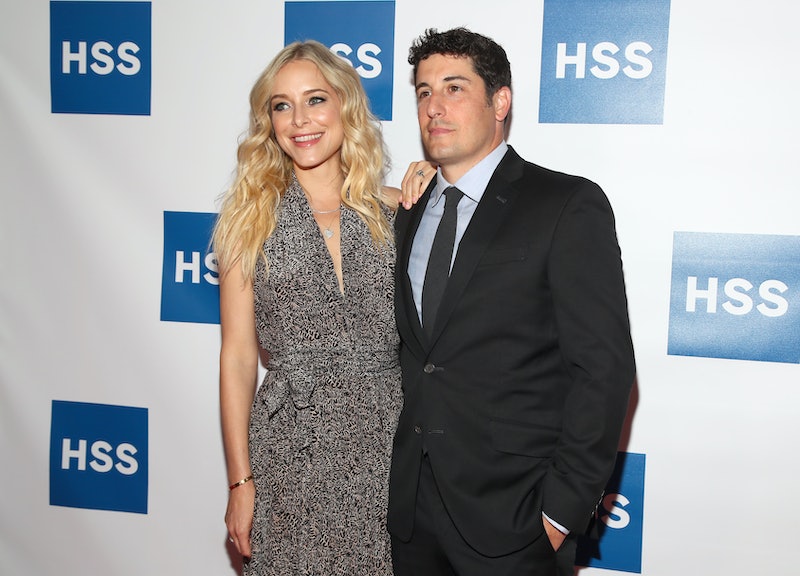 Sometimes, Bachelor and Bachelorette couples just know when they’re meant to be together. Yeah, it’s a reality show, but when you know, you know, right? That seems to also be the same case with Jenny Mollen and Jason Biggs, the celebrity Bachelor Nation super couple that pops up on the May 27 episode of The Bachelorette. They’re there, according to a press release by ABC, to help Hannah find a man. And they definitely can be trusted with the task, because Jason Biggs and Jenny Mollen’s relationship timeline shows that they have a marriage as real as any romance out there.

According to the Daily Mail, Mollen and Biggs met on the set of My Best Friend’s Girl, which they both starred in, and he proposed six months later. Now a decade into marriage, Mollen and Biggs are refreshingly honest about the trials and tribulations of being a married couple raising two young children. For example, when asked what the "sexiest thing" Mollen could do for him would be, Biggs joked to People last year, "take the kids and leave for a couple hours.”

Mollen agreed, laughing, “Oh God, yeah. I think just leave me alone.” It's rare that Hollywood couples actually talk like this — usually celebs say that they're "so lucky" to co-parent with their best friend or something similarly cheesy. While that's also likely true, being in a marriage with two tiny dictators (as Mollen famously calls her children on social media) is rough. Sometimes it gets ugly, which is why Mollen and Biggs' realness is so healthy.

Here's how their relationship came to be.

Biggs popped the question to Mollen, according to the Daily Mail. They had a small ceremony in Los Angeles, that even included a breakfast bar.

Mollen and Biggs had a son, Sid, in 2014, and they’ve spent every moment since then being super candid about how hard it is to be a parent. Including explaining how Sid likes his head held by his mom when he's on the toilet popping. I mean, whatever floats your boat, kid.

Mollen’s book, I Like You Just The Way I Am, came out in 2014, and in it, she details what it’s like to be married to a “famous” Hollywood actor. Mollen has absolutely no boundaries, and her candid nature is seriously funny.

In 2015, Mollen co-hosted the Bachelor In Paradise After Show with Chris Harrison, because she was and is a Bachelor super fan. So is Biggs, and he made appearances on the show, too.

2016: Another Television Show, Kind Of

I Like You Just The Way I Am was picked up as an ABC series and Biggs and Mollen got to act together in it. You'll see people like Busy Phillips there, too.

Biggs and Mollen used a hilarious of picture of Mollen sucking the snot out of Biggs' nose with a NoseFrida (if you have kids, you'll get it) to announce that she was pregnant with their second son.

When you get married, you promise to take the good, and you promise to take the bad and serious. In 2018, per Us Weekly, Biggs announced he'd been sober for a year. "Turns out this sh*t is hard. After some fits and starts, I’ve managed to put together one year of sobriety," he said. "I’m as proud of it as anything else in my life. If you’re struggling, know there’s help. Don’t be ashamed. We can do this.”

Today, Mollen and Biggs are still going strong. Perhaps The Bachelor can keep this couple on retainer to show everyone what real romance looks like.

More like this
Clayton & Susie Broke Up, Citing "A Significant Amount Of Pain" After 'The Bachelor'
By Jordyn Tilchen
'The Bachelor's Peter Weber & Kelley Flanagan Are Reportedly Back Together
By Grace Wehniainen
Bachelorette Gabby Kissed Her New Fiancé On 'Dancing With The Stars'
By Jake Viswanath
Everything To Remember About Lace Morris Before 'Bachelor In Paradise' Season 8
By Grace Wehniainen
Get Even More From Bustle — Sign Up For The Newsletter