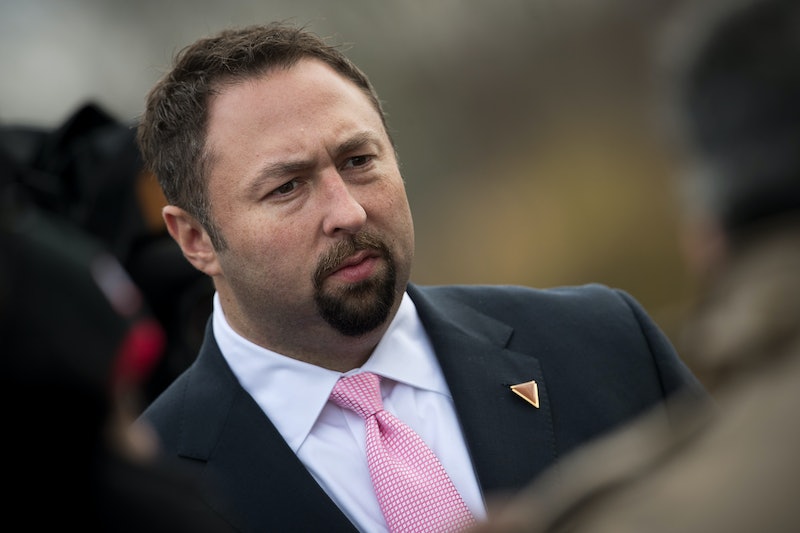 A long-forgotten Trump-adjacent saga just took a turn for the strange. In the latest court filings of their custody battle over their 1-year-old child, former Trump staffer A.J. Delgado alleges that former staffer Jason Miller dosed another woman with the abortion pill, which Delgado's lawyers claim resulted in the loss of that woman's child.

In the documents dated Sept. 14, which were first published by Splinter, Delgado accused Miller of having another affair in 2012 with a woman who worked at a strip club in Orlando. When the woman in question became pregnant, Miller allegedly went to her apartment "with a Smoothie beverage. Unbeknownst to Jane Doe, the Smoothie contained ﻿an abortion bill [sic]," according to the document.

In the filing, Delgado requested a mental health examination of Miller because of his "unsupervised time" with their son.

Miller's lawyers said in a statement to Splinter: "To be clear, there is no validity to the false accusations made in Ms. Delgado's filing." Bustle has reached out to Miller's lawyers for additional comment.

The filing alleged the smoothie contained a pill that "induced an abortion," putting the unnamed woman in the emergency room with heavy bleeding. The child died, and the woman was hospitalized for two days, according to the filing. (The filing also alleged the woman had "potential street drugs in her system.")

After the incident, Delgado's filing alleged the woman signed a non-disclosure agreement provided by Miller, but the documents didn't provide any definitive proof of an agreement, instead stating that the unnamed woman "nonetheless quietly went away."

"We also know the identity of the 'Jane Doe' referenced in the filing, have located her, and Mr. Miller is absolutely certain that he does not know her, never had a relationship with her, and never engaged in the actions Ms. Delgado — and now you — falsely accuse him of committing," his lawyers told Splinter.

Delgado and Miller became a mini-scandal during the presidential campaign when their affair became public in 2016. Delgado told People that the affair started in mid-October 2016, and Delgado found out she was pregnant just weeks after Donald Trump's victory.

After Trump's victory, Miller was announced as the White House communication director in December 2016. Two days later, Miller backed out, citing familial obligations, Politico reported. Then, Page Six first reported news of Delgado and Miller's affair, including cryptic tweets by Delgado about Miller. (The tweets have since been deleted.) In August 2017, Delgado tweeted about the birth of her son, William, confirming the story.

Delgado confirmed the court filing to Splinter, but refused further comment, citing safety concerns. "I'm concerned for my safety (more importantly, my son’s) with Miller and afraid of his reaction if I add comment," Delgado told Splinter.

The filing also claims that Delgado worked with one of the "most respected and pre-eminent" journalists to confirm details of the unnamed woman's story. The filing claims the journalist is still working on the story.