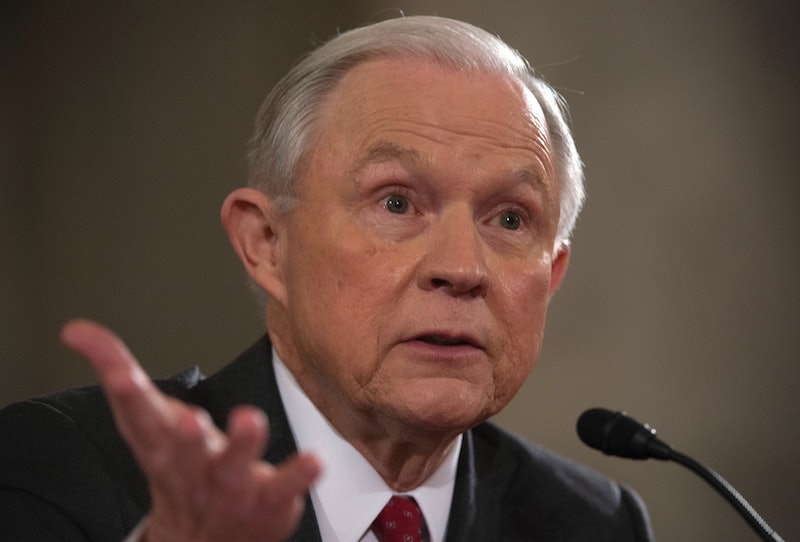 It's been three months since the Washington Post released the infamous 2005 recording of Donald Trump bragging about grabbing a woman's genitals to former Access Hollywood host Billy Bush. Since then, we've learned that admitting to sexual assault does not preclude a man from being elected president of the United States. During the first day of confirmation hearings for one of the most powerful positions a president-elect can appoint, the senator who hopes to become the nation's top lawman indicated that he's learned something, too: Grabbing women's genitals without their consent does indeed constitute sexual assault. At least, that's what Jeff Sessions told members of the Senate Judiciary Committee during his first confirmation hearing to be Trump's attorney general in Washington today.

As a refresher, on the tape Trump, described forcing himself on women, regardless of their marital status or interest in him, bragging that "they let [him] do it" because he's famous. "Grab ’em by the pussy," Trump said. "You can do anything."

But Sessions had apparently studied up on the legal definition of sexual assault before his hearing today. That led to this exchange with committee member Patrick Leahy, a Democrat from Vermont:

But as that exchange demonstrates, Sessions still declined to directly say that the behavior Trump described was literally the textbook definition of sexual assault. Before admitting that, generally, groping women without their consent is sexual assault, he tried to launch his "hypothetical" justification again. Borrowing an excuse we hear often from the president-elect, Sessions claimed that he didn't remember the exact words Trump used on the tape. But of course, when presented the "simple" question, Sessions finally agreed that the behavior described is indeed sexual assault.

If confirmed, Sessions will be responsible for prosecuting sexual assault claims — including those filed by students who are supposed to be protected by federal laws prohibiting such behavior. But if it takes Sessions three months and repeated grilling by a congressional committee to even acknowledge that grabbing a woman's genitals without her consent is a criminal act, how can he possibly be expected to defend and protect victims who are looking to his agency to secure justice?

As People for the American Way executive vice president Marge Baker said in a statement today, Sessions "finally decided that grabbing a woman by her genitals without consent is sexual assault, but he gave no indication of why he so rushed to defend a candidate who described precisely that behavior."

In fact, Sessions appeared eager to explain away his "confusion" about Trump's remarks, without ever directly mentioning the President-elect. And if the Attorney General of the United States can say he was simply "confused" about the definition of sexual assault, it is all but certain that alleged assailants will use the same line of reasoning to avoid punishment.

I can hear the courtroom justification now: "I'm sorry, your honor, I was confused by her saying 'No.' I thought she meant I couldn't have sex with her, not that I couldn't grope her."