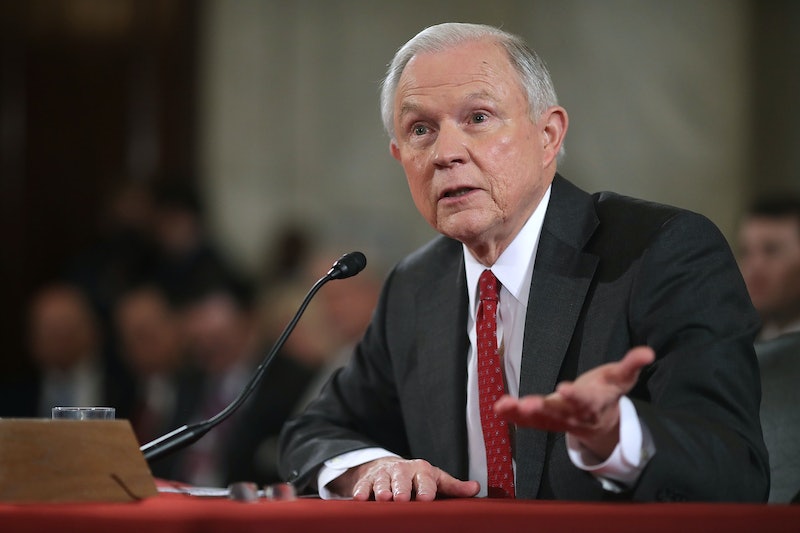 President Donald Trump's dismissal of acting Attorney General Sally Yates was shocking, but when you look back at her confirmation hearing, her decision to stand against Trump's immigration order is anything but surprising. And the person who asked over a year ago whether or not she'd be willing to say "no" to the president makes the situation that much more applicable. During her 2015 confirmation as deputy attorney general, Jeff Sessions, Trump's current attorney general nominee, asked Yates a question that has become more important than anyone could have realized.

In a C-SPAN recording of Yates' confirmation hearing on March 24, 2015, she's asked numerous questions by congressional members from both sides of the aisle. When it is Sessions' turn to talk with the former U.S. Attorney for the Northern District of Georgia and determine whether or not she's ready for a deputy attorney general role, he posed a serious question:

You have to watch out because people will be asking you to do things and you need to just say no about. Do you think the attorney general has the responsibility to say no to the president if he asks for something that’s improper? A lot of people have defended the Lynch nomination, for example, by saying 'well he appoints somebody who's going to execute his views. What's wrong with that?' But if the views the president wants to execute are unlawful, should the attorney general or the deputy attorney general say no?

Yates responded confidently, understanding the weight of his question:

Senator, I believe that the attorney general or the deputy attorney general has an obligation to follow the law and the constitution and to give their independent legal advice to the president.

And that is exactly what Yates chose to do, even if it meant her being fired as a result. In fact, the former acting attorney general wrote a letter explaining why she advised the DoJ to not defend Trump's executive order. Her words echo the statement she made months and months ago before being officially sworn-in. She wrote:

My responsibility is to ensure that the position of the Department of Justice is not only legally defensible, but is informed by our best view of what the law is after consideration of all the facts. In addition, I am responsible for ensuring that the positions we take in court remain consistent with this institution’s solemn obligation to always seek justice and stand for what is right. At present, I am not convinced that the defense of the Executive Order is consistent with these responsibilities nor am I convinced that the Executive Order is lawful.

And Yates isn't the only one questioning the legality of Trump's temporary travel ban. In fact, it's possible that Trump's order could potentially violate the Immigration and Nationality Act, which prohibits discriminating on the basis of nationality or religion while issuing immigrant visas.

Now that Yates has been replaced by Dana Boente, who has expressed that he will uphold Trump's executive order, her words shouldn't be forgotten. In fact, they've come full circle. Of all people, Sessions himself should take her decision into account should he be confirmed as attorney general.