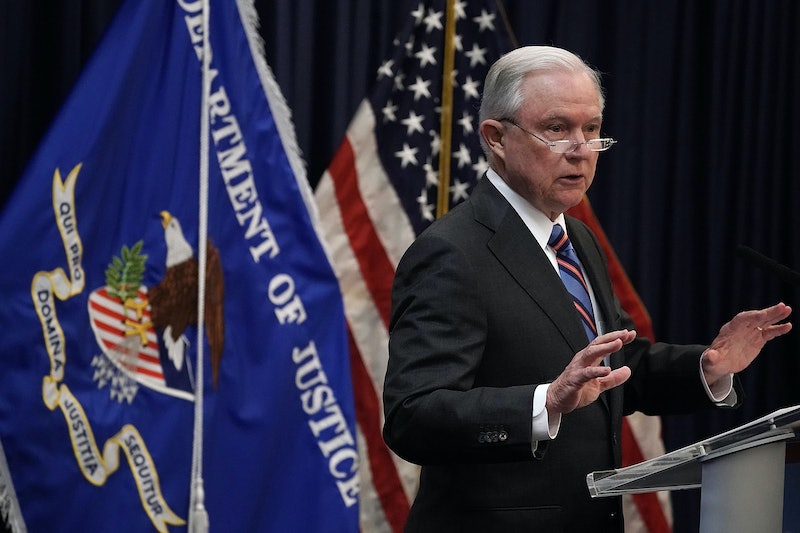 The U.S. Attorney General shared some controversial instructions on Monday. Speaking to incoming immigration judges, Jeff Session advised against showing sympathy for those who appear in their court room, suggesting that sympathy could cloud their decision making.

"When we depart from the law and create nebulous legal standards out of a sense of sympathy for the personal circumstances of a respondent in our immigration courts, we do violence to the rule of law and constitutional fabric that bind this great nation. Your job is to apply the law — even in tough cases," Sessions told incoming judges in Falls Church, Virginia, according to BuzzFeed News.

"No great and prosperous nation can have both a generous welfare system and great prosperity, and open borders," Sessions said, according footage from his talk. "Such a policy is radical, it's dangerous, it's never been adopted here, or any other major nation that I am aware of, so it must be rejected out of hand, and the American people have done so."

Sessions contended that the Trump administration was taking appropriate actions to protect U.S. borders, and that it was doing so at the will of the American people.

"They want a safe, secure border and a lawful system of immigration that actually works. Let’s deliver it for them," Sessions said.

Many of the points Sessions hit echoed some of the year's most contentious political controversies. At one point, for example, he lamented that "the asylum system has been abused for years. We all know that." He went on to explain that, in his perspective, undocumented migrants were using the asylum process to circumvent regular immigration proceedings.

"Saying a few simple words — claiming a fear of return — has transformed a straightforward arrest for illegal entry and immediate return to — too often — a prolonged legal process wherein an alien may be released from custody into the United States and possibly never show up to an immigration hearing," he said.

“Good lawyers, using all of their talents and skill, work every day—like water seeping through an earthen dam — to get around the plain words of the [immigration law] to advance their clients’ interests," Sessions said. "Theirs is not the duty to uphold the integrity of the act. That is our most serious duty."

The attorney general's comments provoked criticism from some of those who have worked from within the country's immigration legal system.

“We possess brains and hearts, not just one or the other,” Jeffrey Chase, a former immigration judge who now works as an immigration attorney, told BuzzFeed News.

"Sessions is characterizing decisions he personally disagrees with as being based on sympathy alone, when in fact, those decisions were driven by sympathy but based on solid legal reasoning," Chase said.

The sentiments that Sessions expressed on Monday were in alignment with the opinions that he and the Trump administration have previously shared. Though controversial, it was certainly business as usual.