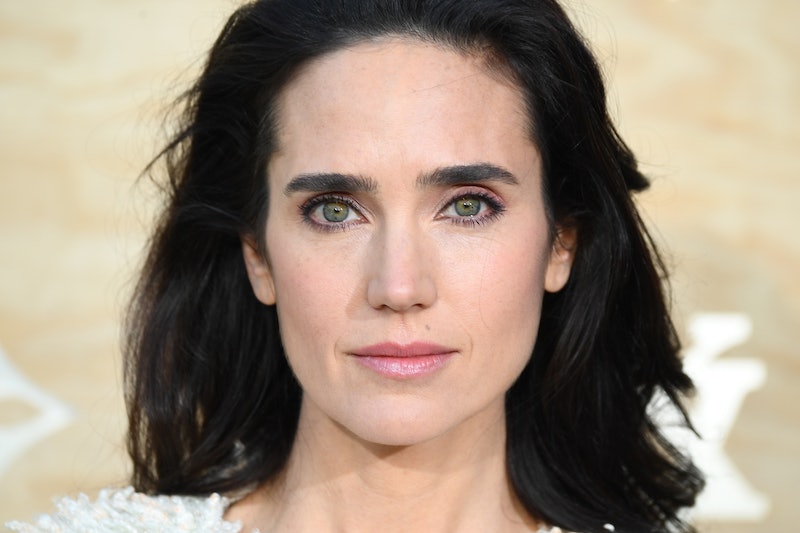 In times like this, certain Hollywood A-listers refuse to remain silent. Since news of the Harvey Weinstein allegations broke on Oct. 5, stars like Emma Watson, who responded on Twitter, and Cara Delevingne, who spoke up about her alleged experience with Weinstein, have come forward. And while these women are helping to move the needle, the sad truth remains that these alleged circumstances are nothing new. Sexual assault and misogyny are corrupt elements of American corporate culture. During an interview for her latest, Only the Brave, Jennifer Connelly speaks out about Weinstein for the first time, and her statement reflects how complex and deep-rooted these issues are.

While promoting the upcoming film, the actor offers her thoughts on the allegations against the studio executive. (Some suggest Weinstein allegedly made sexual advances towards them, and would threaten their careers if they refused). "I think that no woman anywhere should have to suffer those kinds of violations to get or maintain a job," she explains.

But like Watson (who shed light on men who are also victims), the actor wants to broaden the conversation to include sexual assault victims of all genders and industries. "In fact, no person anywhere should have to suffer those kinds of violations," she says. "I think it's an abuse of power that should not be tolerated."

On Oct. 5, the New York Times published the first exposé about Weinstein, which included decades of allegations related to sexual assault and harassment. On Oct. 10, The New Yorker published a story as a product of another extensive investigation. The piece included interviews with 13 women, a few of whom claimed Weinstein allegedly raped them, as well as alleged audio of the studio executive admitting to touching a woman against her will.

The 65-year-old was since fired from The Weinstein company. In a statement to the Times, Weinstein said: “I appreciate the way I’ve behaved with colleagues in the past has caused a lot of pain, and I sincerely apologize for it. Though I’m trying to do better, I know I have a long way to go.” His then-lawyer Lisa Bloom posted a statement saying Weinstein, "denies many of the accusations as patently false." The same day as the initial NY Times piece, his attorney Charles Harder revealed Weinstein's plan to sue the Times for "false and defamatory statements." As for the second exposé, his representation claimed Weinstein "unequivocally denied" the allegations.

This isn't the first time Connelly has spoken to the mistreatment of women she'd witnessed. In 2015 the actor expressed why there was still a ways to go for complete equality in show business culture. "I don’t think that we’ve reached gender parity yet," she told IndieWire. "You can see in the statistics of violence against women, inequality of pay between men and women. We’ve come a long way… I think there are always exceptions to the rule."

That same year, Connelly pointed out a double standard in the business regarding sexist treatment towards female actors. "No one ever asks Paul [Bettany, her husband] if it’s tough juggling work and family," she told The Edit. And although sexist questions may seem small in comparison to the trauma of sexual assault, it all feeds into the same, overarching issue: Hollywood has accepted its unequal foundation for years.

A perfect example of this was part of Weinstein's statement to the NY Times — a bizarre attempt at explaining and justifying that "rules about behavior and workplaces were different" back in the '60s and '70s. The quote was mocked and dragged on Twitter, because it's this exact reasoning that allows anyone to say such behavior is "OK."

As pointed out by Connelly in her 2015 interview, gender equality in the entertainment industry and in society as a whole are not mutually exclusive. "They’re inseparable, it’s not a separate thing," she told IndieWire. "It is [unequal] in the movie industry and in our culture."

Connelly's recent comments reflect her sentiments from nearly three years ago. None of this behavior — whether abusing power or feeding into sexist "norms" — is OK, in the entertainment industry or not. These issues are seemingly wide-spread and never ending, and until we can have an honest and open dialogue about harassment in every field, society's normalized (but unacceptable) attitude towards victims of abuse will continue.

More like this
On 'The Handmaid’s Tale,' Christine Ko Fights Back
By Gretchen Smail
Jinkx Monsoon Is About To Get Real Sketchy
By Sam Ramsden
The New Bachelor Will Be Announced Next Week & Here Are The Top Contenders
By Grace Wehniainen
Paul Mescal, Man Of Mystery
By Samantha Leach and Heather Hazzan
Get Even More From Bustle — Sign Up For The Newsletter