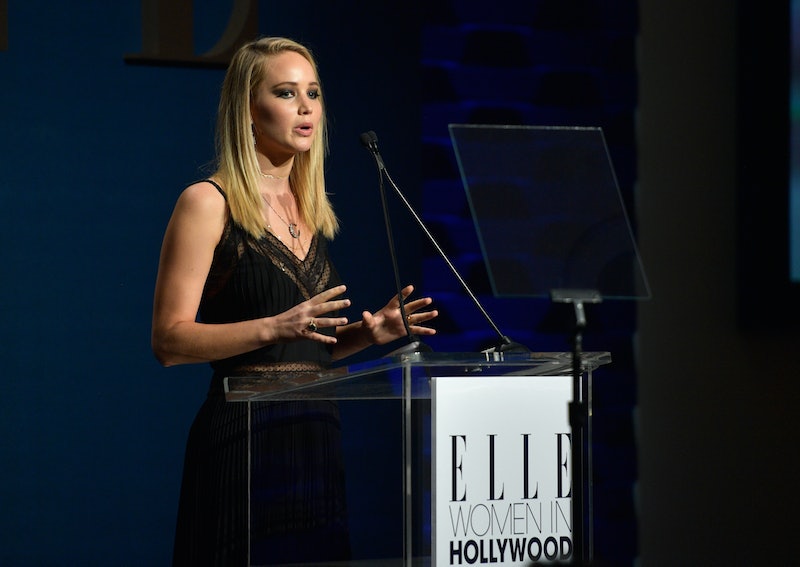 Since sexual assault allegations against Harvey Weinstein have come to light over the past two weeks, gender violence in the film industry has been on everyone's mind. This was especially true at ELLE's Women In Hollywood event on Oct. 16. Many women who took the stage touched on issues of sexual harassment and abuse, including Jennifer Lawrence. In her speech, Jennifer Lawrence bravely revealed she was forced to do a "naked line-up" by a producer in her early career to encourage her to lose weight.

Lawrence said the shock and disgust gripping Hollywood has been "oddly unifying," both among celebrities and among women. Many women have used social media to share stories, show their support, and write the words "me, too" to show the world how sexual assault and harassment is a widespread issue.

Lawrence might not have used the words "me, too" in her speech, but she did share a story about her experiences that did the same work as those two simple words. According to her speech, Lawrence was made to do a "naked line-up" by a female producer, which she says was to be her inspiration for losing weight.

“When I was much younger and starting out, I was told by producers of a film to lose 15 pounds in two weeks,” Lawrence said in her ELLE Women In Hollywood speech.

“During this time a female producer had me do a nude line-up with about five women who were much, much, thinner than me. We are stood side-by-side with only tape on covering our privates... After that degrading and humiliating line-up, the female producer told me I should use the naked photos of myself as inspiration for my diet.”

When Lawrence tried to stand up for herself, she was met with another incredibly inappropriate response. According to Lawrence's speech, a male producer claimed that he didn't know why people were saying that she was fat, because she was "perfectly f***able."

Lawrence shared that, like many other survivors, the experiences she went through still affect her today.

“I’m still learning that I don’t have to smile when a man makes me uncomfortable,” she added. “Every human being should have the power to be treated with respect because they’re human.”

These stories about abuse and harassment are hard to read. It's not easy to be immersed in what is currently happening in the world, especially for survivors of sexual assault. But the conversations women like Lawrence are starting about their own harrowing experiences are vital to pushing for change in Hollywood and society.

“My heart goes out to all of the women affected by these gross actions," Lawrence said in her speech. "And I want to thank them for their bravery to come forward.”

Lawrence wasn't the only woman who touched on the Weinstein allegations at the ELLE Women In Hollywood event either. Director Ava DuVernay spoke about fighting to protect all women, regardless of race, sexuality, or identity, when introducing actor Tessa Thompson.

"For...women like me and many others, that protection of our womenhood isn't enough, because we're not only women," she said in her speech, according to ELLE. "We're black. We're brown. We are native. We are Asian. We are Muslim. We are queer. We are many things that deserve safe spaces and protection. We can take this moment and enter in with focus.

"Harvey [Weinstein], sexual harassment, all of that's deserving of our focus and attention. But, we come in here with focus and ferocity and fever, with an intention that says, until all women are safe, until we take an intersectional approach to safeguard within this industry, that we are not truly living up to the movement."

This fight to end sexual assault and harassment is far from over. In fact, for some, it is just beginning. But every time a woman like Lawrence tells her story or a social media user writes "me, too" on her social media platform, the opportunity for change grows. And it's a change we so desperately need.

More like this
Jennifer Lopez's ‘90s Updo Hairstyle Takes Me Back To Middle School
By Olivia Rose Ferreiro
Early 2000s-Era Rhinestone Tattoos Are Back, Baby
By Jordan Murray
The 10 Best Emmys 2022 Makeup Looks
By Paris Giles
Camila Cabello Slayed The Face Gem Trend At Rock In Rio 2022
By Olivia Rose Ferreiro
Get Even More From Bustle — Sign Up For The Newsletter