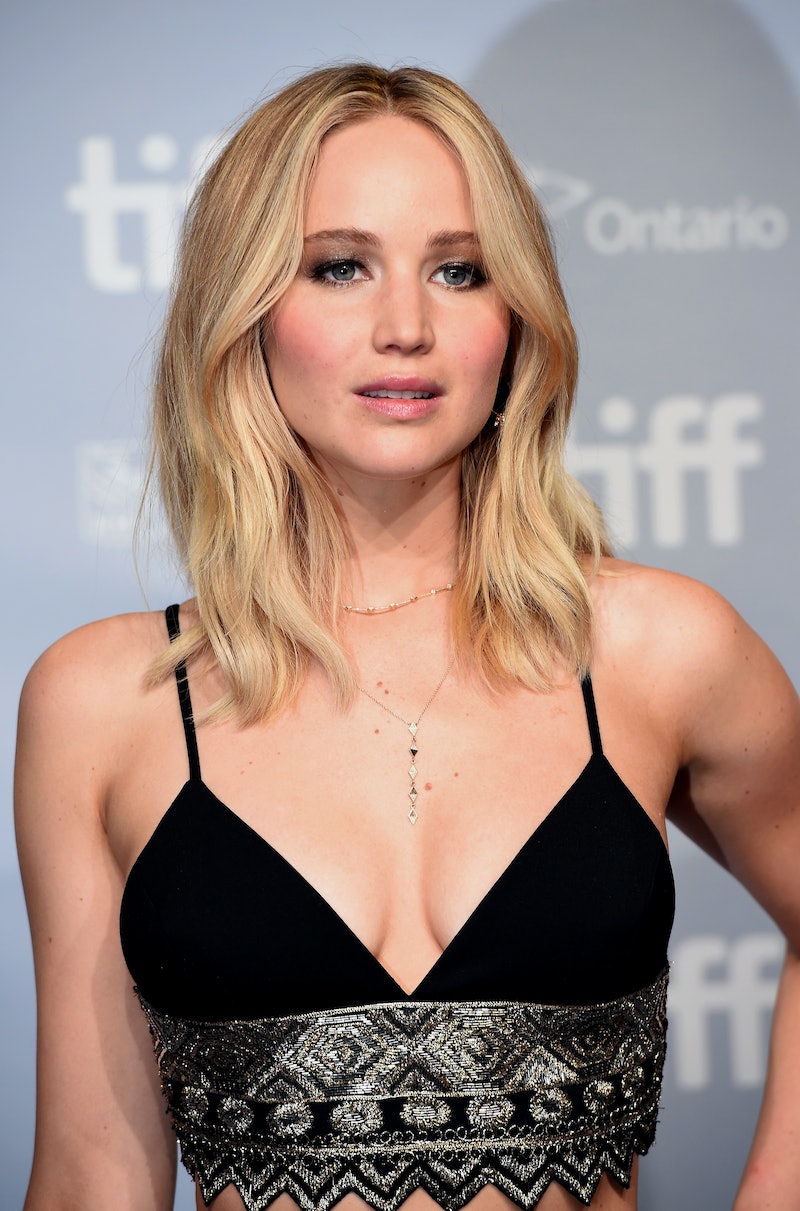 Five days after the New York Times broke a story that recounts decades of sexual harassment allegations against Harvey Weinstein, more women are coming forward to tell their stories. And even more are showing support for these women, including Jennifer Lawrence, who released a statement regarding Weinstein. Lawrence described his alleged actions as "inexcusable" and thanked those who have come forward to share their stories.

However, their stories are not her own, as Lawrence explained in a statement obtained by Entertainment Weekly. She says she didn’t experience any harassment or abuse when working with Weinstein on her 2012 film Silver Linings Playbook, which led to her Best Actress Oscar win. (His company the Weinstein Company produced the film, and Weinstein has since been fired from the company following the allegations.)

"I was deeply disturbed to hear the news about Harvey Weinstein’s behavior. I worked with Harvey five years ago and I did not experience any form of harassment personally, nor did I know about any of these allegations. This kind of abuse is inexcusable and absolutely upsetting. My heart goes out to all of the women affected by these gross actions. And I want to thank them for their bravery to come forward."

Lawrence is one of several actors who have worked with Weinstein and say they were unaware of any alleged abuse. Meanwhile, actor Ashley Judd says that "women have been talking about Harvey amongst ourselves for a long time." Judd is one of the women who accused Weinstein of inappropriate behavior with her in the initial Times report. (Weinstein plans to sue the New York Times, according to his attorney, claiming their story is "saturated with false and defamatory statements.")

Similar to Lawrence, Meryl Streep said she didn't know about Weinstein's alleged behavior in a statement released Monday: "I did not know about his having meetings in his hotel room, his bathroom, or other inappropriate, coercive acts." The actor had worked with Weinstein before, most recently 2014's August: Osage County. Regardless, Streep called Weinstein's alleged behavior "inexcusable" and put her support behind the accusers, whom she called "heroes."

Kate Winslet is another actor who spoke out against Weinstein; his production company was behind her 2008 film The Reader, which led to her first Oscar for Best Actress. But she doesn't deny that the rumors were out there. In a statement to Variety, Winslet said she "had hoped that these kind of stories were just made up rumors, maybe we have all been naïve. And it makes me so angry." Winslet called Weinstein "disgraceful and appalling," adding that the way Weinstein treated these women is "NOT the way women should ever EVER deem to be acceptable or commonplace in ANY workplace."

Meanwhile, on Tuesday, The New Yorker released its own feature that includes reports from multiple women that Harvey Weinstein allegedly raped, sexually assaulted, and harassed them. That same day, the New York Times published another story that includes allegations from Gwyneth Paltrow and Angelina Jolie that Weinstein harassed them early on in their careers. (A spokesperson for Weinstein told both publications, "Any allegations of non-consensual sex are unequivocally denied by Mr. Weinstein. Mr. Weinstein has further confirmed that there were never any acts of retaliation against any women for refusing his advances.")

Lawrence, Streep, and Winslet statements make it clear they are standing with the alleged victims. As many others, including Mindy Kaling, continue to point out, there is no apparent benefit in these women coming forward. Kaling tweeted, "There is no incentive for women in Hollywood to come forward to tell lies of a powerful producer sexually harassing them. I believe them." This also ties into why many women say they didn’t reveal their stories sooner, reportedly for fear Weinstein would retaliate or ruin their careers.

As Italian actor and director Asia Argento, who accused Weinstein of allegedly performing oral sex on her without her consent in 1997 when she was 21, told The New Yorker, she didn’t tell her story because she feared that Weinstein would “crush” her. It was something that left her feeling helpless. “The thing with being a victim is I felt responsible,” she told the publication.

No victim of sexual assault is ever responsible. Whether Hollywood was aware of these rumors or not, actors must stand together and speak out to make sure that women feel able to report instances of sexual harassment or assault.

More like this
Mel B Speaks Out Against Domestic Violence In A Powerful Speech
By Sophie McEvoy
At 28, Melanie C Was Falling In Love & Reclaiming Her Confidence
By Olivia-Anne Cleary
Megan Rapinoe's Relaxation Hack Is Super Dreamy
By Carolyn Steber
Kourtney Kardashian Says She “Loves” The Changes To Her Body Caused By IVF
By Jake Viswanath
Get Even More From Bustle — Sign Up For The Newsletter