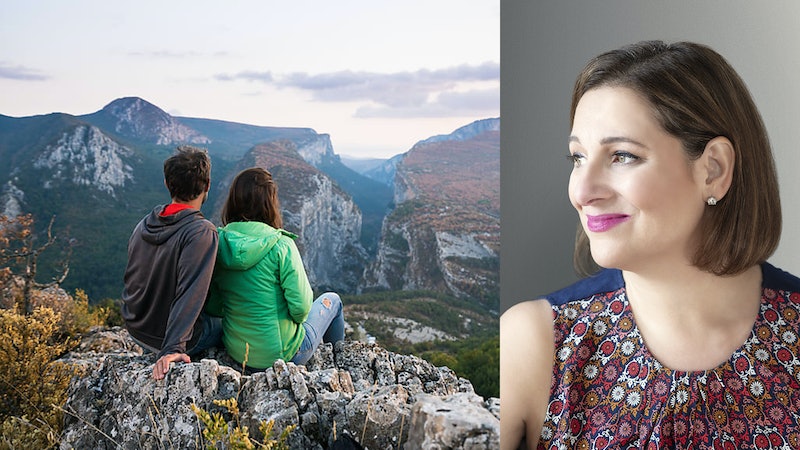 In the first installment of Bustle's Ask An Author column, Mrs. Everything author Jennifer Weiner answers a letter from a reader who has been with her boyfriend for seven years, but is unsure if she wants to stay together for one big reason: He can't decide if he wants to get married and have kids, and she knows she wants both.

Each month, a different author will answer one of your questions about love, work, friendships, mental health, and more. If you have a question, submit your letter anonymously to Bustle for a chance to have it answered next month.

I'm a 29-year-old cis woman, and I've been with my boyfriend for seven years. He is thoughtful, caring, smart, attractive, kind, and my best friend. I love him, and he loves me — we're on the same page about all that. But there's one big thing we haven't been able to agree on: marriage and kids.

We've had conversations about this. Believe me, I've read all the articles Google has to offer on how to talk to a partner about this. It's a common problem, I get it. But we've been talking about this for years, and every time, it ends the same. He still doesn't know. I know, it's hard for anyone to know how they'll feel 25 years in the future. He says he thinks about it and sometimes marriage and kids are what he wants, and other times he just wants to travel the world kid-free. I get that (and I think that sometimes, too, especially after spending actual time with kids!)

But he knows what I want and that if he doesn't want the same thing, we should probably break up. I don't want to do that. I want to have a long, loving relationship with this man and raise a family, and I keep holding out, waiting for him to decide if we're going to do that together. Am I refusing to see what's in front of me, or will love win in the end here?

If you were a character in a novel I was writing, I know exactly what I’d do. The first chapter would lay out the particulars, the history of your relationship, who he was, who you are, and what had brought you to this impasse. By Page 15, you’d have ditched Mr. Not Quite Right and struck out on your own, a single lady in a new big city. You’d meet a new, quirky, charming cast of characters. You’d make new friends, who would offer you sage advice. You’d have horizon-expanding adventures. And, in the end, you’d meet a new partner, who loved you and did want kids. Or you’d be settling in with someone else when Mr. Not Quite Right came riding back onto the horizon to stand beneath your window, boombox cranked, having realized that he couldn’t live without you, and that he did want babies, after all.

Or maybe the book would start with your current flame refusing to entertain the possibility of babies but grudgingly agreeing to a puppy. He’d be on a business trip, so you’d have to go to the shelter to pick out the dog yourself, and you’d fall in love with the man who worked there with the kind brown eyes, who loved you and loved your new dog and desperately wanted children. Or maybe you’d meet a new man at the dog park, and he’d be a single father, and your happy ending would include his son or daughter (resentful at first, loving by the last page) as well as your own baby.

If you were a character in a novel I was writing, I know exactly what I’d do.

Maybe you’d be the one changing your mind, deciding, after some adventures, that you could live without babies, but you couldn’t live without your one true love. Or — oops! — maybe the condom would break, or the Pill would fail, or that foolproof IUD your ob/gyn inserted in 2016 would not be so foolproof at all, and Mr. NQR would have to decide if he was going to stay or go. Or maybe his sister and her husband would die tragically, and he’d be left in charge of an adorable little orphan, whom the two of you would raise together. In fiction, there’s no limit to the ways I could craft a happy ending, two people moving forward in perfect harmony; a life with no regrets.

Real life, however, is not fiction. It’s maddeningly complicated and frustrating. People – even the ones we love, especially the ones we love — refuse to change, or bend, or grow. Compromises are a lot more common than neat happily-ever-afters, all wrapped up in a bow. So I would encourage you to ask yourself two things: are you absolutely certain that your happy ending includes children, and are you just as sure that he’s not going to change his mind?

If you think you can move forward without children in the future, and that you won’t be haunted by regrets and what-ifs, then that’s your answer.

Real life, however, is not fiction. It’s maddeningly complicated and frustrating. People – even the ones we love, especially the ones we love — refuse to change, or bend, or grow.

If you have some hope that he might come around, give yourself a timeline. Love may be patient and kind, but female biology is neither, and you can’t run the clock forever. Set a deadline, stick to it, and if, in the end, his answer is still ‘no,’ then it’s time to move on.

And if you already know that you absolutely positively do want children, that he absolutely, positively does not, and that neither one of you is going to change his or her mind, then you probably know what you have to do. Breakups suck, especially breaking up with someone you still love, who still loves you, but I have to imagine that living with that kind of regret and a head full of might-have-beens would hurt even worse. There are many paths to parenthood; there are plenty of men who do want to get married and have children. But, if there are no ways for you to have him and children, and kids are something you can’t live without, then you need to yank off the band-aid, get out there and find your happy ending.

Jennifer Weiner is the #1 New York Times bestselling author of over twenty books, including Good in Bed, The Littlest Bigfoot, and her memoir Hungry Heart: Adventures in Life, Love, and Writing. Her new novel Mrs. Everything will be released on June 11, 2019. A graduate of Princeton University and contributor to the New York Times Opinion section, Jennifer lives with her family in Philadelphia.

If you have a letter for Bustle's Ask An Author column, submit it anonymously for a chance to have it addressed by an author.