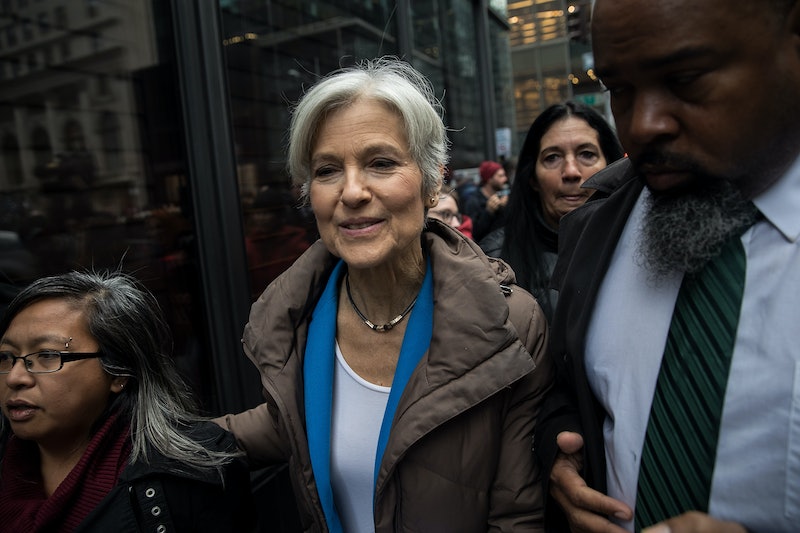 For weeks, throughout Green Party presidential candidate Jill Stein's desperation bid to fund recounts in three crucial swing states ― Wisconsin, Pennsylvania, and Michigan ― there was an ancillary question on plenty of people's minds. Namely, if the recount either cost less than her fundraising totals, or if she couldn't get them all done, what happens to the money? And, of course, how much might she have left? Well, the latter part was just answered by Joe Schoffstall of conservative site Washington Free Beacon. Stein should end up with more than $2 million in unspent recount money, following the payment of a nearly $1.5 million refund in Wisconsin, plus hundreds of thousands more in Michigan.

As for where that money will go, Stein has already stated that publicly, saying the funds will go towards the launch of a new organization called Count My Vote. What she terms the new chapter in her "fight for election integrity." As Wisconsin Public Radio detailed when Stein announced the new group, she specifically wants to stop using electronic voting machines, supports automatic election audits by way of optical scanning of hand-printed ballots, and wants to bring state-level voter ID laws to an end. In other words, assuming she gets the refunds that are owed her and follows through on her pledge, those are the kinds of goals that money will go towards.

The final cash haul Stein brought in on her recount push was staggering, a testament to just how many progressives and Democrats hoped that some sort of after-the-fact review could swing the outcome of the electoral map ― or, at the very least, wanted to normalize the notion of post-election recounts and/or audits. Stein brought in more than $7 million over the course of her fundraising effort, which was more than double the amount she raised for her actual presidential campaign. Throughout the 2016 cycle, according to OpenSecrets, she raised just $3,509,477, and spent all but $58,303 of it.

The totals led many to question whether Stein would simply keep the money if it exceeded her costs, a fact which likely necessitated her to be openly disclose her plans. And while it won't be clear how successful the new voting rights group will be until it's up and running, it seems like her current plan could be a more sympathetic idea to the people who donated than, say, the money going directly into Stein's or the Green Party's coffers with no broader emphasis on voting rights. In any case, this brings to an end the long saga of the Jill Stein recount.