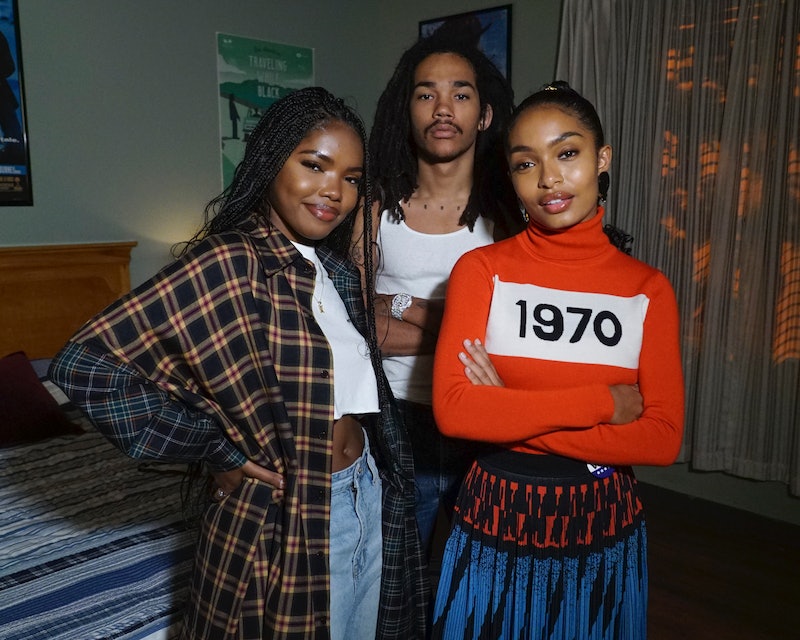 Hey, the new kid's not so bad. When Freeform announced in July 2019 that Ryan Destiny would be playing Jillian from grown-ish, the network described her character as a smart, worldly, and cultured HBCU transfer who can talk art and music with Luca, politics and activism with Aaron, and also fits right in with Zoey and her eclectic crew of girls. After a few weeks of slowly letting viewers get to know the film student, the Feb. 27 "Doin' the Most" episode solidified Jillian's role as the ultimate cool girl.

Even Zoey was hesitant to accept the newcomer, and who could blame her? In the midst of that emotional backslide with Luca, Zoey discovered her ex getting dressed in Spelman College transfer Jillian's dorm room. Awkward. It was unfortunate that it looked like a guy would prevent them from becoming close, too, because when they first met in their public speaking class, they really seemed to hit it off. What could go wrong with having to sit next to "the new girl who's sleeping with Luca" now?

Well, maybe not much. After Aaron read Zoey for dropping the ball on helping him cop that job interview with her dad, Jillian was there to provide the shoulder Zo Zo needed to cry on, or, more accurately, the drinking buddy she needed to drown her sorrows. As they nursed their hangovers with PediaLytes the next morning, Jillian even came through with the solid Waffle House hangover cure idea, even if Zoey had to put a slight L.A. on it, suggesting the Obama special at Roscoe's as an alternative. (If you're wondering, Obama's special consists of three wings with a waffle, potato salad, or french fries.)

Suffice it to say that not much bonds two people more than that agony of a hard-earned hangover, but Zoey and Jillian definitely hit that level. While most probably wouldn't be too excited to be friends with their recent ex's new boo, the women are a great example of the power of two dope souls who just happen to click. Why should Zoey's "ancient history" with Luca come between that? Jillian's super chill demeanor wrapped in an ability to dispense some pretty solid advice makes her seem like someone anyone would want to be friends with anyway.

She even had Zoey's back in helping convince Luca to cover for her at Joey Bada$$' Paper magazine shoot in Las Vegas. When Zoey was, again, feeling down about missing out on being there in person, even-keeled Jillian was there to acknowledge her word and provide some words of comfort. "It's OK to be bummed that you missed out on something you worked really hard for," she told her. "When you're killin' it, sometimes you gotta sacrifice. Those are the growing pains of leveling up." Zoey needs that kind of support now that Nomi has left CalU. (Don't worry, though, Nomi still appeared briefly via FaceTime in this episode.)

Truth be told, she and Luca seem to be a much better coupling anyway. In the episode, viewers finally learned how Luca and Jillian met — coincidentally enough at Zoey's homecoming party. In the most Luca move ever, he had asked Jillian for change for a $2 bill because he apparently only messes with pay phones. She, later, accomplished the impossible, getting Luca to temporarily — gasp — "push pause on the metaphysical." Even Jazz, super distracted from track by her and Doug's relationship, took partial credit for creating what she dubbed "the second cutest couple on campus."

Are they a couple though? Jillian was quick to point out to Doug and Jazz that they're not a couple couple. "And why aren't we?" Luca asked her. After she responded, "You tell me," it seemed like they'd finally made it official. And, honestly, given how cool Jillian is, even Zoey can't be mad about it.

More like this
'Fate: The Winx Saga’s Cliffhanger All But Begs For A Season 3 Renewal
By Brad Witter
Nicola Coughlan Shared A Lady Whistledown Excerpt From ‘Bridgerton’ Season 3
By Grace Wehniainen, Alyssa Lapid and Sam Ramsden
A New 'And Just Like That' Table Read Pic Confirms A Key Character's Return
By Jack Irvin and Grace Wehniainen
Viserys’ Fate On 'House Of The Dragon' Could Differ From The Book In This Surprising Way
By Grace Wehniainen
Get Even More From Bustle — Sign Up For The Newsletter