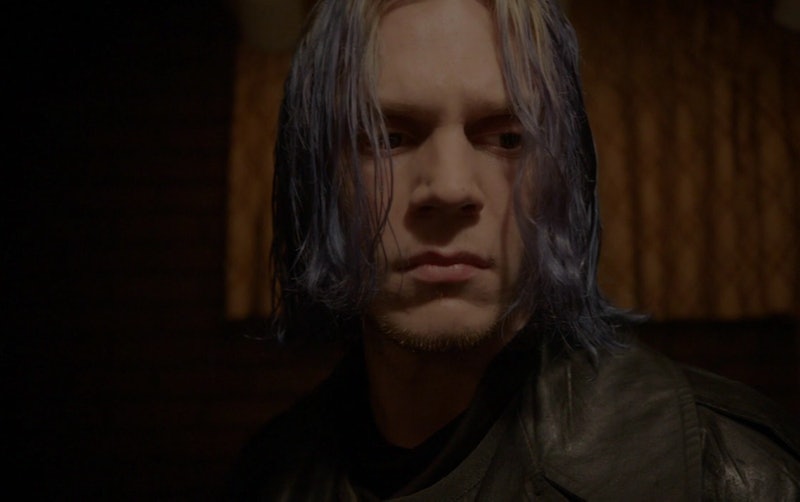 Evan Peters has been doing double duty this season on American Horror Story: Cult, playing not just the role of unhinged modern day cult leader Kai Anderson, but also appearing in flashbacks as famous fringe group leader from history. Peters will play Jim Jones on AHS: Cult in the Oct. 31 episode, appropriately called "Drink the Kool-Aid. Before you delve into what will surely be yet another chilling performance by the actor, here's what you need to know about the real leader of the People's Temple.

According to the History Channel, the real Jim Jones founded The People's Temple in the '50s after he'd made a name for himself in previous years as a young pastor and healer. In the '60s, Jones moved the group to California, and was followed by about 100 members. He then increased recruitment efforts, opening a branch of the People's Temple in San Francisco and eventually buying land in Guyana, a small country in South America, according to The Today Show. Jonestown, as the compound was known, would come to be famous for all the wrong reasons. In November of 1978, Jones compelled more than 900 people to commit a mass suicide by drinking cyanide-laced Kool-Aid, an act that he had them "rehearse" prior to the real think. The tragedy is the source of the "don't drink the Kool-Aid" phrase we hear so casually thrown around these days. Jones himself also died at Jonestown, but he was killed by a gunshot wound that appeared to be self-inflicted, per the same Today Show piece.

It's easy to wonder how so many people could be led to their voluntary deaths by just one man — but that's the terror of a cult mentality. Some who escaped Jonestown before the tragedy remember being hopeful about all the possibilities it held. Teri Buford O'Shea, who escaped three weeks before the suicide, talked to The Atlantic in 2011 about her experience in Jonestown with Jones. She was 19-years-old and homeless when she joined. A man told her about a community she could live in where she would have food, housing and a "visionary" leader.

"He was very charismatic and attracted people who were feeling vulnerable or disenfranchised for whatever reason. Most of them were African-American, but there were also white people, Jewish people, people of Mexican descent," O'Shea told The Atlantic. "There were religious Christians and communists. If you wanted religion, Jim Jones could give it to you. If you wanted socialism, he could give it to you. If you were looking for a father figure, he'd be your father. He always homed in on what you needed and managed to bring you in emotionally."

Though he played the part of a concerned leader, people couldn't just leave Jonestown, O'Shea soon learned. She claimed in the same interview that Jones had collected blackmail material on all of his followers, and that he wouldn't allow any children to leave. So if a parent wanted to escape, it was as if they were abandoning their child. "There was no way of getting a child out of Jonestown," O'Shea claimed. "And if people did defect, Jim said he'd send them things that had poison on them. At least, that's what he told us he was doing."

There were many, many other warning signs as Jones continued to become incredibly paranoid, O'Shea told The Atlantic. She claimed that he fed them propaganda about horrors happening back in the United States to deter his followers from trying to leave, and that he had people stationed around the compound with guns. O'Shea claimed that she managed to escape before the massacre by saying she wanted to work for the Temple back in San Francisco, and then moving to New York and changing her name. She told the magazine that she definitely thinks of Jonestown as a cult, and wants others to view it as a cautionary tale.

"A cult is when you aren't allowed to see your friends or family. I'm not talking about a retreat, or two weeks at a spa," she said in the Atlantic story. "I'm talking about total isolation — someone takes all your money and brings you to a place where there's no communication, or if there is you aren't allowed to use it. Those are the lessons I took from Jonestown, and that's the message I think the American people should take from it. Trust your gut and don't give up your liberties."

It's an incredibly disturbing story, and one that Evan Peters is sure to play with authenticity. Jones was known for his charisma and magnetism, and the AHS actor has both of those in spades.

More like this
The ‘Emily In Paris’ Season 3 Release Date Is Here, Plus The First Footage
By Bustle Staff
Devi Is Going To Meet A “Smoldering Bad Boy” In ‘Never Have I Ever’ Season 4
By Jack Irvin and Gabrielle Bondi
The First Clip From Netflix’s Queen Charlotte ‘Bridgerton’ Prequel
By Bustle Editors
'Killing Eve' & 'Doctor Who' Stars Just Joined The Cast Of 'True Detective' Season 4
By Brad Witter
Get Even More From Bustle — Sign Up For The Newsletter