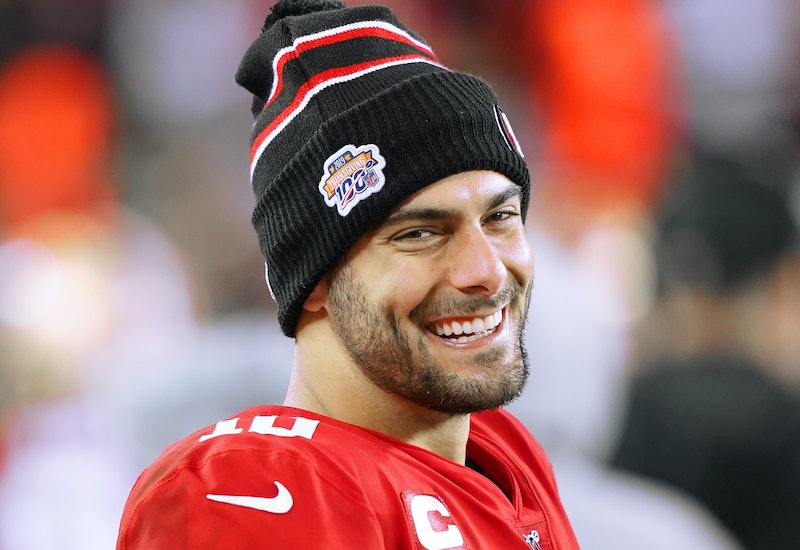 San Francisco 49ers football quarterback Jimmy Garoppolo’s Instagram account doesn't just showcase his athletic career. In addition to all the content that chronicles his trade from the New England Patriots to the 49ers, you can find snapshots of him with his three brothers, Billy, Tony, and Mike Garoppolo. These photos of the football player, who's slated to compete against the Kansas City Chiefs at the 54th Super Bowl in Florida on Feb. 2, offer up a rare glimpse into another important aspect of his life.

On Instagram in December 2018, Garoppolo celebrated his dad’s birthday with a family photo. He captioned the photo of the five Garoppolo men, “Happy belated Birthday to the one and only OG #TonyG #Pops.” A few years prior, the quarterback also commemorated National Siblings Day with a throwback photo of his brothers. The former New England Patriots athlete captioned the April 2016 Instagram post, “Happy National Siblings Day to these goons” with the hashtag #WeddingCrashers.

Garoppolo has commemorated his mom on occasion, too. He honored the Garoppolo matriarch with an Instagram post on Mother’s Day in May 2015 of the two sharing a hug on screen for ESPN. He wrote, “Happy Mothers Day to all the moms out there!”

Garoppolo made the trade from the Patriots to the 49ers in 2017 in the NFL Draft. During his stint with the Patriots, Garoppolo won two Super Bowl rings in the 2014 and 2016 season under the reign of the star quarterback Tom Brady. In an interview with NBC Sports on Sunday, 49ers CEO Jed York reflected on Garoppolo’s trade before the upcoming Super Bowl and dished on coach Kyle Shanahan’s insistence that Garoppolo learned “the basics of the offense” during the infancy of the trade.

“When we made the trade in the middle of the season, Kyle was probably the most conservative with it," York told NBC Sports. "Everybody from [Kyle’s wife] Mandy Shanahan to all our fans were ready for [Garoppolo] to start day one. But we had to make sure that we did it the right way… We wanted to put Jimmy in the right situation to be successful."

Since then, Garoppolo's road to this year's Super Bowl has been an impressive one, per York. "If you don't have a quarterback who can win in big games and big moments, it's really, really hard to get to this point," York added. “And Jimmy, obviously, exceeded any expectations in those games that you could ever ask for a player coming into an organization.”