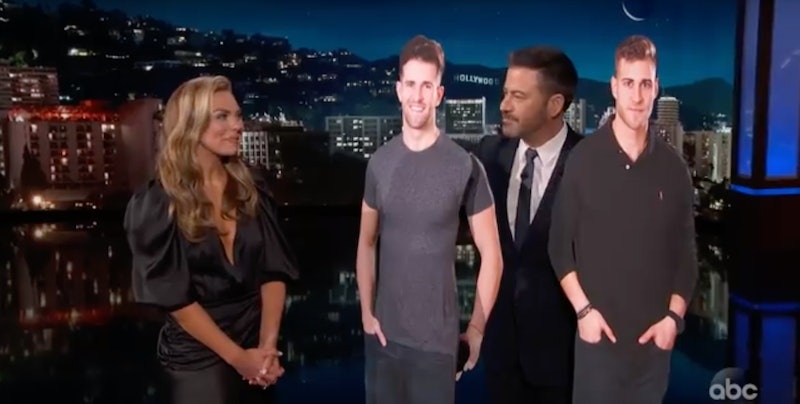 Two episodes into Hannah Brown's season of The Bachelorette and you know what that means: It's time for her to stop by Jimmy Kimmel Live. The talk show host predicts the Bachelorette winners every season and he's got a solid track record. On Monday night, Jimmy Kimmel predicted the winner of Hannah's season, and there's a pretty good chance that he's right. Or at least he could be, based on past precedent.

Before revisiting the past, let's check out Kimmel's top four predictions for Hannah's season. He believes that Pilot Pete, Tyler G., Luke P., and Jed will go on hometown dates later this season.

Then Kimmel narrowed the field down to two candidates: Luke P. and Jed. And he had a lot to say about the controversial Luke P. For those who aren't all caught up, the host came through with a recap:

"You gave Luke the first impression rose. Then you ripped his shirt off. Then, he told you he's falling in love with you after knowing you for like 11 minutes."

After, Kimmel took his predictions a little too far. He told Hannah, "And you probably went to the fantasy suite with him." He even asked the beauty queen, "Did you? Did you make love to Luke P.?" Wow, slow your roll there. Hannah replied, "I cannot say."

Then Kimmel continued his recap. He said, "Jed is a singer and a songwriter from Nashville. You took a second look at him tonight in his speedo and his boots." She was feeling his performance during the pageant. However, Luke P. nabbed the crown at the end of the group date competition.

So, what about Hannah's final rose? Ultimately, Kimmel concluded, "I believe that the man you wind up with is... Jed." A solid choice, especially considering the hypothesized runner-up.

There are plenty of people who make predictions when they watch the show, but Kimmel is usually right, so it's actually entirely possible that Hannah and Jed may be currently engaged.

After all, Kimmel correctly selected Becca Kufrin's final pick during the previous season. While he predicted Becca and Garrett would get engaged, Kimmel also remarked at the time, "Becca will go with Garrett until she finds out about all the terrible stuff he posted online." He was off about that part. Becca and Garrett addressed his controversial Instagram likes during After the Final Rose. And now, they're happily living together in San Diego, something they confirmed to People in May.

There was another time where Kimmel was a little off. In 2017, he nailed Rachel Lindsay's final two — Bryan Abasolo and Peter Kraus. But during their interview, Kimmel emphatically told Rachel, "I believe you're currently engaged to Peter." He was so close, but ultimately incorrect. Rachel and Bryan got engaged. Currently, they are living in Miami and getting ready for their summer wedding.

Everyone makes mistakes here and there, of course. And let's remember that Kimmel guessed JoJo Fletcher would pick Jordan Rodgers in 2016. In fact, they're still together, currently living in Dallas, her hometown.

There's still a while to go before Hannah's Bachelorette finale. Will Kimmel be right in the end? Jed has a decent shot. And at the very least, if the late-night host is wrong, let's hope he's also incorrect about Luke P.