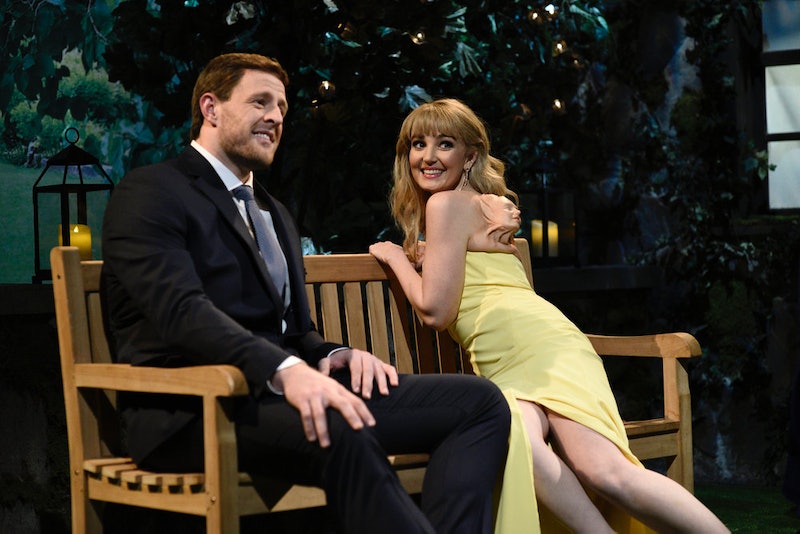 It's become an annual tradition for Saturday Night Live to spoof The Bachelor, and the latest season of the popular ABC show has officially gotten its send up. On Feb. 1, SNL's "Pilot Hunk" parody of The Bachelor poked fun at Peter Weber's season of the show, pretending each and every contestant was named Hannah. Guest host J.J. Watt, a defensive end for the Houston Texans in the NFL, starred as Peter, meeting and greeting each woman with a bland, "I love that."

Peter's season of The Bachelor is not the first to be parodied by the comedy show. Back in 2017, SNL used the skit format to spoof Nick Viall's Bachelor season with a sketch called "Beard Hunk". Then, Ben Higgins' season as "Bland Man", Chris Soules' as "Farm Hunk" , Arie Luyendyk Jr.'s as "Car Hunk", and finally, Colton Underwood's season with "Virgin Hunk." "Pilot Hunk" shows how quickly it's becoming a rite of passage for Bachelor stars to be teased by the SNL cast.

Before meeting a few of his potential suitors in the latest sketch, the "Pilot Hunk" named Pat said: "I'm a sky board looking for my fly girl." Then, he proceeded to meet the suitors, who tried to impress him with increasingly absurd antics, such as writing him a letter — just one, the letter "T" — and crying over confiscated vitamins. During one hilarious moment, a contestant is taken away by security for turning 30, which is grounds for instant expulsion in SNL's version of the Bachelor universe.

SNL added a key twist for their take on Peter's season of the show, making very single one of the contestants named "Hannah." The show might have meant the joke as a reference to Peter's ex-girlfriend, former Bachelorette Hannah Brown, but it's also having fun with the franchise's tendency to cast women with the same name. During Arie's season of The Bachelor, 4 out of the 23 women competing were named Lauren, which is also the most common name for contestants in the history of the show, according to E! News.

Though The Bachelor has been a repeated source of comedic inspiration for the SNL cast, Wyatt brought new energy to the spoof as well. The NFL star has proven his comedic skills in the past, guest starring on New Girl in 2011 and appearing in Bad Moms in 2016, as per IMDB. Athletes don't seem to be the comedy show's top pick for host, as Wyatt is the first NFL player to headline the show in eight years, as per Deadline. Over the course of the evening, he proved himself by bringing the laughs in each sketch, even as the purposefully one-note "Pilot Hunk."