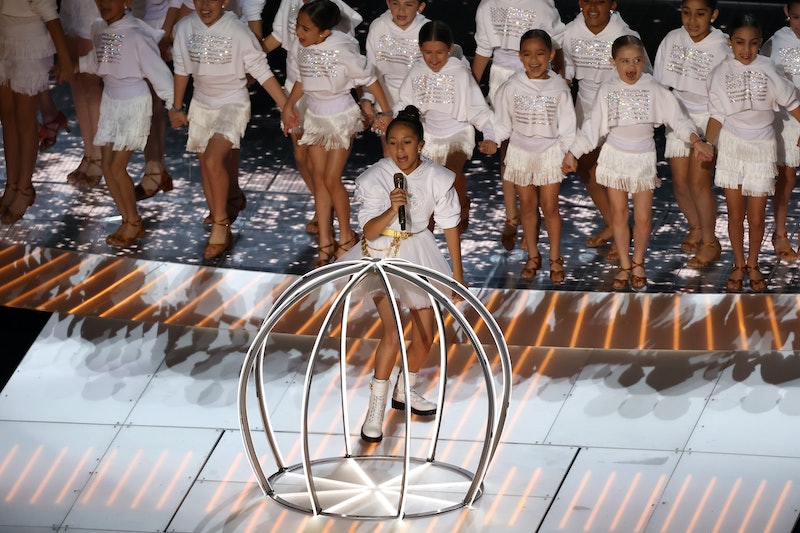 Jennifer Lopez brought many things with her to her Super Bowl Halftime Show: pyrotechnics, shimmery bodysuits, hip-shaking, and even Shakira. But she also brought one other special guest: her daughter. Yes, J. Lo's daughter Emme Muniz performed alongside her during the Super Bowl Halftime Show, leading a children's chorus in a rendition of "Let's Get Loud" to cap off her mom's rousing medley of her hits.

Emme sat in a light-up dome in the center of the chorus, leading them in a slowed down version of her mom's hit while Shakira played the drums. Then, she ran to join J. Lo for a mashup of the song, in which she sang the refrain to Bruce Springsteen's "Born in the USA" to make a statement about Latinx immigrants in America while her mom draped herself in an American and Puerto Rican flag.

This isn't the first time Emme has performed for thousands of people, however. The 11-year-old, whose father is Lopez's ex-husband Marc Anthony, regularly joined her mom on stage to sing the song "Limitless" on J.Lo's recent It's My Party tour. But the world was first introduced to Emme's talent in 2019, when J. Lo shared a video of her daughter singing Alicia Keys as part of a behind-the-scenes look at her tour rehearsals. "We should have her come out and do something on tour," J. Lo says, smiling. Emme looks a little embarrassed in the video, but clearly she eventually was convinced to do so.

Less than a year later, Emme is already a seasoned performer with a Super Bowl halftime show under her belt. At this rate, there are likely plenty of other musical milestones in her future.

More like this
Twitter Is Freaking Out Over Rihanna’s 2023 Super Bowl Halftime Show Announcement
By Stephanie Topacio Long
Everything To Know About Taylor Swift’s 10th Studio Album, 'Midnights'
By Grace Wehniainen and Jake Viswanath
Kesha Is Down To Be The Next Bachelorette
By Jake Viswanath
Dan Levy Appears In The Latest Teaser For The Weeknd's HBO Series, 'The Idol'
By Jake Viswanath
Get Even More From Bustle — Sign Up For The Newsletter