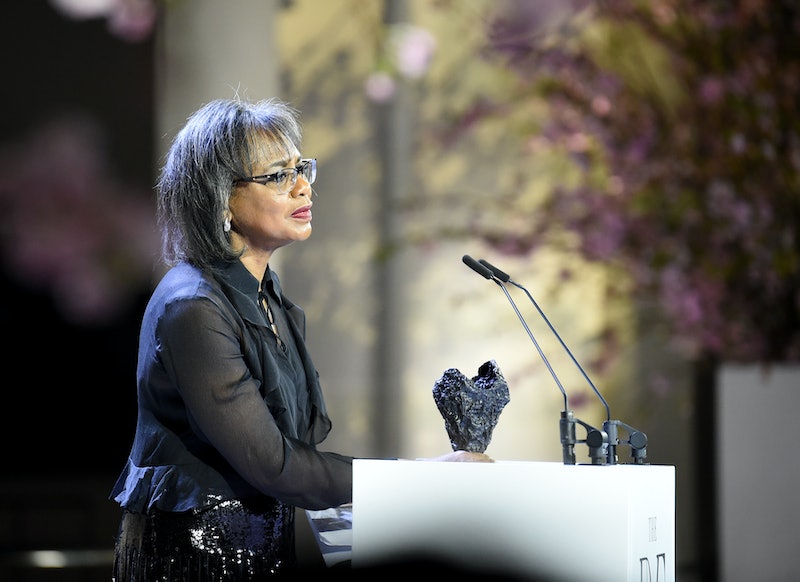 Former President Barack Obama's VP, who announced Thursday that he's running for president, has long been criticized by progressives for his handling of a 1991 Senate testimony, and that criticism may well resurface now that he's running for president. But Joe Biden and Anita Hill have spoken with one another, his campaign confirmed to Bustle on Thursday. While it's unclear exactly what was said, Biden's campaign says he expressed "regret" for "what she endured" during the testimony.

"Vice President Biden has spoken with Anita Hill," Kate Bedingfield, Biden's deputy campaign manager, tells Bustle. "They had a private discussion where he shared with her directly his regret for what she endured and his admiration for everything she has done to change the culture around sexual harassment in this country." Bustle has reached out to Hill for comment.

On Wednesday, Hill told the New York Times that she felt unsatisfied with her discussion with Biden. “I cannot be satisfied by simply saying I’m sorry for what happened to you," she said. "I will be satisfied when I know there is real change and real accountability and real purpose." Additionally, she confirmed to the publication that she won't back Biden in the 2020 race. She said:

The focus on apology to me is one thing. But he needs to give an apology to the other women and to the American public because we know now how deeply disappointed Americans around the country were about what they saw. And not just women. There are women and men now who have just really lost confidence in our government to respond to the problem of gender violence.

Biden was chair of the Senate Judiciary Committee when Hill testified that Clarence Thomas, then under consideration for a Supreme Court seat, had sexually harassed her at two jobs (Thomas denied the accusations). For decades, people criticized the manner in which Biden handled Hill's testimony.

During the episode, the then-Delaware senator allowed Thomas to testify before and after Hill. He didn't step in when Republican senators on the committee accused Hill of lying or, alternatively, when one attempted to explain why the alleged sexual harassment she suffered was "not too bad." Additionally, Biden did not call on several witnesses who could have testified on Hill's behalf. Thomas was ultimately confirmed to the court, where he sits today.

Biden, who voted against Thomas' confirmation, has expressed regret over the episode at various points in the past. At a 2017 Glamour event, he said that he's "so sorry that she had to go through what she went through," and he reiterated in March next year, "I regret I couldn't come up with a way to get her the kind of hearing she deserved," the Chicago Tribune reported.

However, Biden has not publicly apologized for his own role and decisions during the Hill hearing. This has earned him additional criticism — including from Hill herself, who told the Washington Post in 2017 that Biden hasn't "take[n] ownership of his role in what happened." Hill, a professor, said at a 2018 event in South Carolina that Biden hadn’t apologized to her and that "the statute of limitations has run on an apology."

There's evidence that Biden's handling of the Hill testimony could hurt his presidential prospects: In a 2018 Politico/Morning Consult poll, 30 percent of Democratic voters said they disapproved of Biden's conduct during, and 17 percent said they're less likely to vote for him in the Democratic primary because of it.

In her statement Thursday, Bedingfield did not reveal when Biden and Hill spoke. However, the New York Times later reported that Biden called Hill in early April. During an appearance on CNN, declined to say whether or not he apologized to her during their conversation.

"I'm not going to get into their private discussions, but they have spoken, and I'll leave it at that," Bedingfield told Brianna Keilar. When asked if the conversation had taken place in the last month, Bedingfield said that she's "not gonna set a timeline on it."