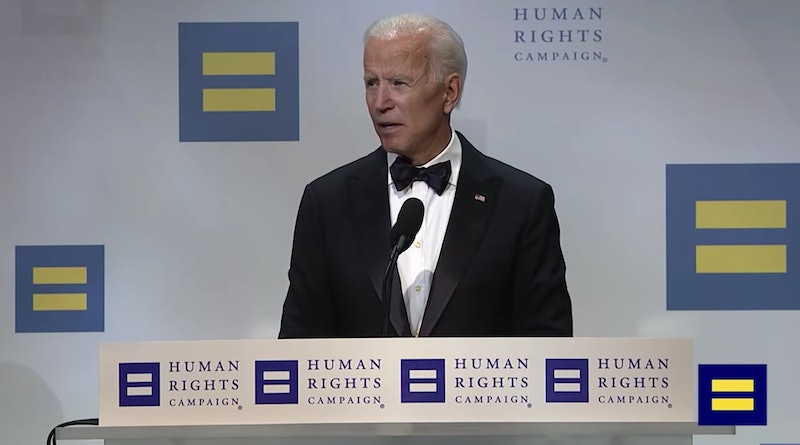 At the annual dinner of the country's largest LGBTQ charity, former Vice President Joe Biden took aim at the commander in chief for using the "White House as a literal, literal bully pulpit, callously exerting his power over those who have little or none." Biden criticized President Donald Trump's administration at the Human Rights Campaign dinner on Saturday night, noting that "forces of intolerance" count on the president to support efforts to rollback LGBTQ rights.

Biden focused his speech on the LGBTQ community's advances and challenges, but called out the president too:

Forces of intolerance remain determined to undermine and roll back the progress you have made. This time they — not you — have an ally in the White House. ... Instead of using the full might of the executive branch to secure justice, dignity, and safety for all, the president uses the White House as a literal, literal bully pulpit, callously exerting his power over those who have little or none.

The influence of Trump's election and presidency has been particularly hard on children, Biden also told the crowd, noting that the Trevor Project LGBTQ suicide hotline received a record numbers of calls after Trump was elected, and then again after he instituted the transgender military ban.

Biden alluded to the serious nature of his speech as soon as he took the stage. He called the fight for equal rights for LGBTQ Americans "the civil rights issue of our day," hinting about his political message to come. "It's about who we are as a country, who we are as a people, and that's not hyperbole," Biden told the crowd.

But his speech didn't paint the situation for LGBTQ Americans as hopeless — far from it. For one thing, he said, the progress made so far was not thanks to President Barack Obama, or anyone else.

"The speed with which these things change is not thanks to any national figure," Biden said. He instead thanked activists from throughout the decades for advancing LGBTQ rights, from those who participated in the Stonewall demonstrations to PFLAG parents — even calling out some of the names of activists he knew in the room.

"We've come this far because you spoke up, because you demanded justice, because you'd been denied to long — and you did it despite the voices of intolerance that tried to tear you down. And many of you — especially those of you closer to my age — paid an enormous personal price, a professional price and literally put your lives in jeopardy to speak out," Biden said. "You risked your livelihoods, your very personal wellbeing."

Biden also gave these people credit for preventing a bigger rollback of rights under Trump. "Your tenacity, your integrity literally bent the arc, the moral arc of this nation, much more toward justice," Biden said.

The American people, he went on to argue, "will not support" a rollback on LGBTQ rights — but only if they know what is happening under the Trump administration. Biden said that "we should be reminding them."

"I have confidence in the face of this onslaught that the vast majority of the American people are with us — it's the story of supporting many brave Americans who came out and spoke up," Biden said.

Biden thinks that if that story continues, the LGBTQ community will be all right.